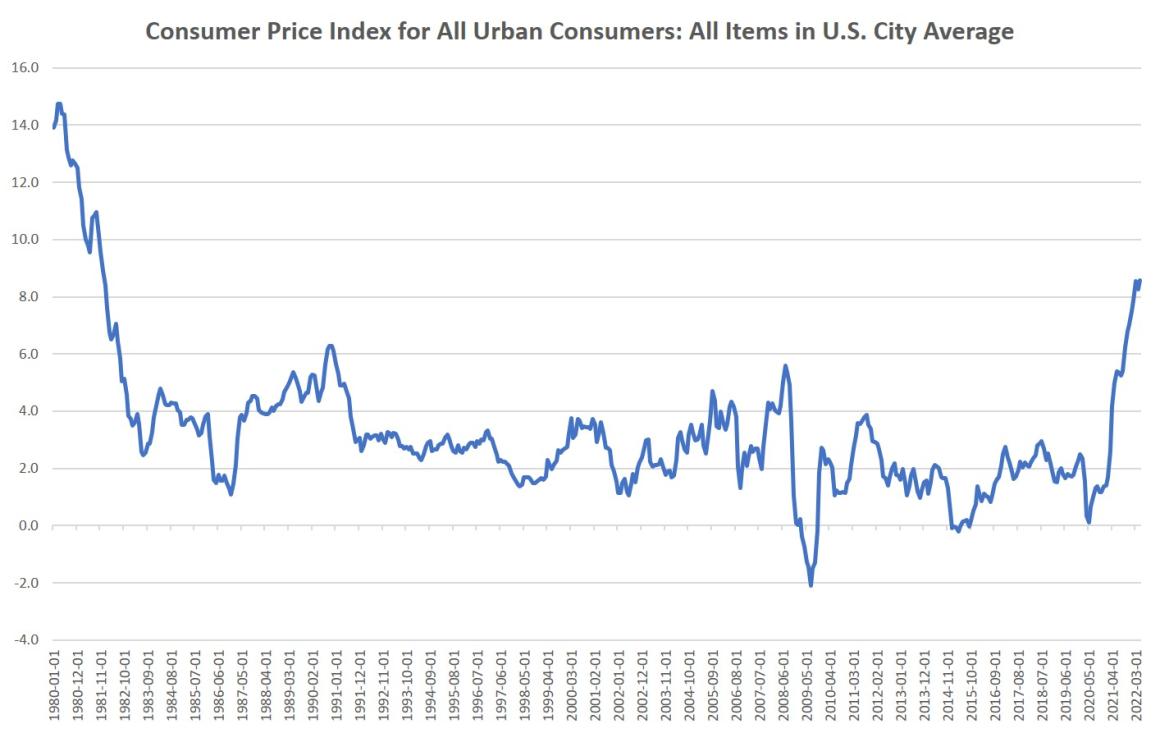 The US Bureau of Labor Statistics released new Consumer Price Index data this morning, and it shows price inflation in May surged at the fastest rate since 1981. The overall CPI showed prices increased last month at a rate of 8.6 percent, year over year. That’s nearly a forty-one-year high—the highest since December 1981’s CPI surge of 8.9 percent.

Year-over-year CPI inflation growth had somewhat moderated in April, prompting some observers to suggest inflation had peaked. YOY growth fell to 8.3 percent in April, which was down from March’s growth rate of 8.5 percent. But, with May’s new multi-decade high, hopes of a past peak appear to primarily be based on wishful thinking.

Price surges spanned across many key categories of goods, including food, energy, and transportation. Food prices overall were up 10.1 percent year over year, while energy was up 34.6 percentvover the same period. Gasoline was up 48 percent.

Although auto-purchase prices have somewhat moderated in recent months, used cars and trucks were still up 16.1 percent over the period, and new vehicles were up 12.6 percent. Airline fares surged as well, rising 37.9 percent, year over year.

The new BLS data reinforces what has already been growing general sentiment over the cost of living. Gasoline prices have inflicted increasing pain on households in recent months, as CNN reports:

The US average for the price of a gallon of regular gas hit $4.99 according to the most recent reading from AAA Friday. It marked the 14th straight day, and the 31st time in the last 32 that gas has set a record in America. Gas prices have climbed 39 cents, or 8 percent, just in the two weeks since the start of the Memorial Day weekend kicked off the traditional summer driving season.

For much of the country, $5 gas is already here.

Meanwhile, rent is surging at cringe-inducing rates in many cities across the nation. Some cities report increases of more than $1,000 year over year. Rents in New Jersey, for example, are up nearly 33 percent year over year. But rent increases are not reserved for northeastern big cities. Rent is up by one-fifth in Richmond, Virginia, since 2020.

Grocery bills packed a punch as well, with prices for meats and eggs rising 14.2 percent, and “food at home” in general up 11.9 percent.

Real Wages Continue to Go Down

Thanks to rising inflation, real wages took one of the biggest hits in decades during May. Average weekly earnings increased 5.24 percent year over year in May. But that left a gap of 3.4 percent between rising prices and rising wages. 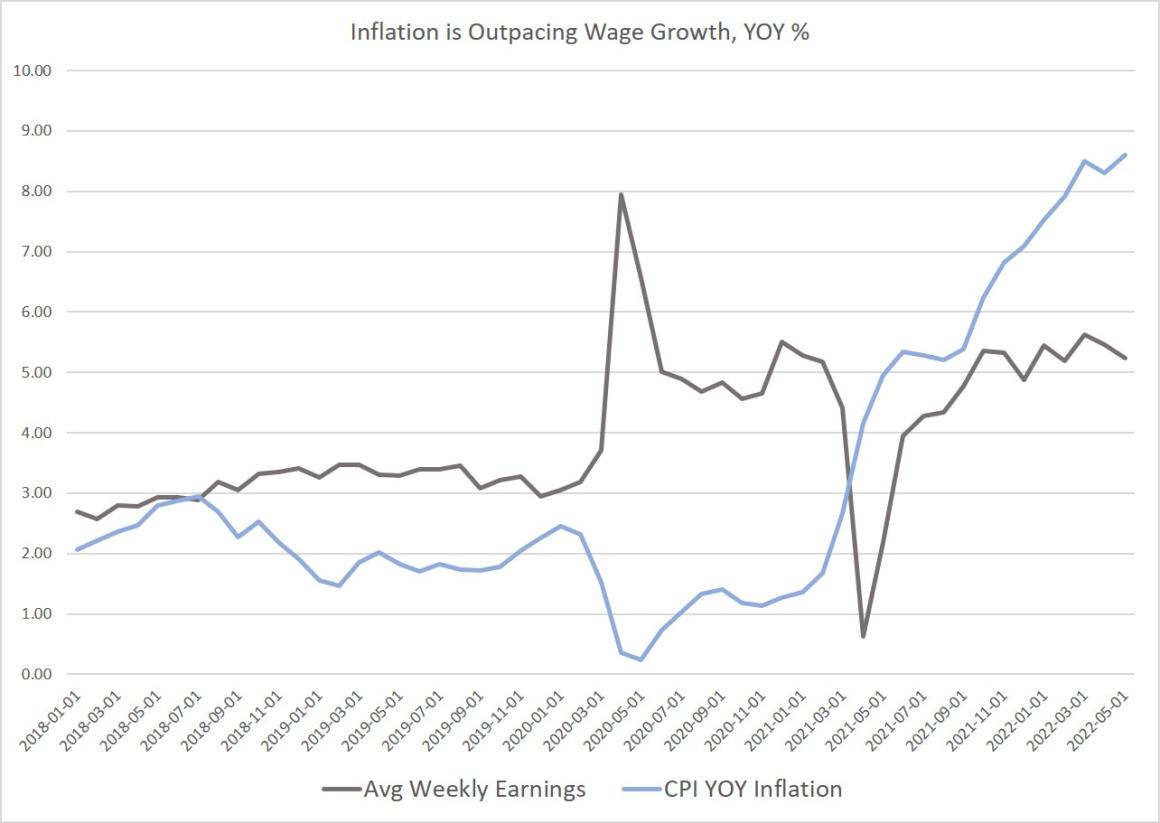 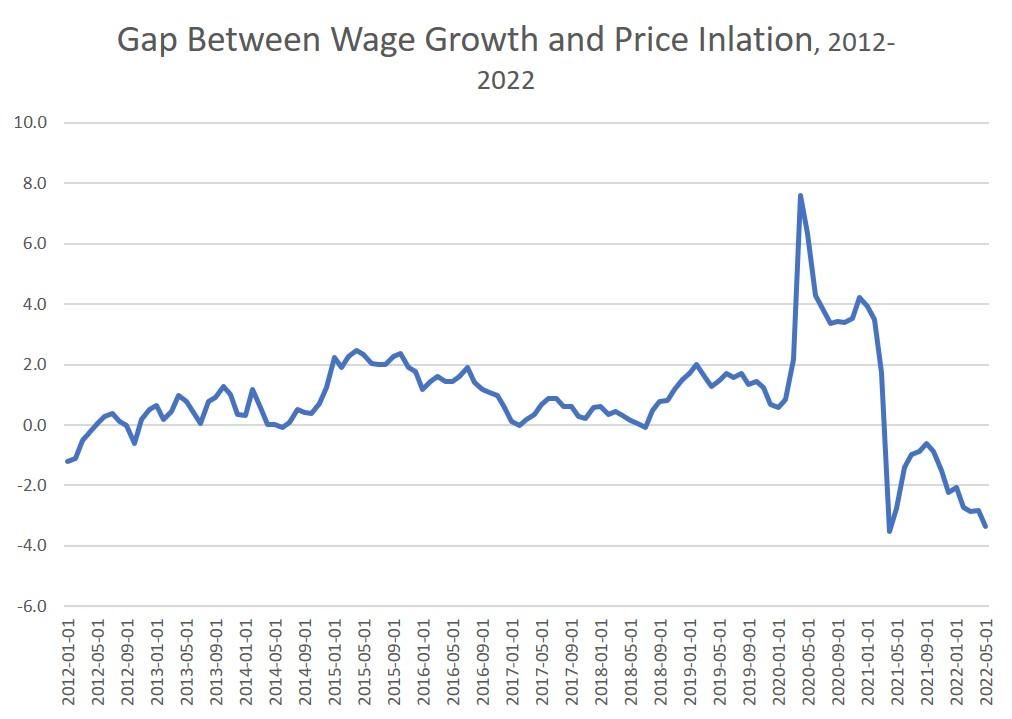 Yellen Admits She Was Wrong

Last week, past Fed chair and current Treasury secretary Janet Yellen—a chief architect of today’s Fed policy—was reminded that she had predicted there was only a “small risk” of inflation and that it would be manageable. In response, she admitted

Well, look, I think I was wrong then about the path that inflation would take … as I mentioned, there have been unanticipated and large shocks to the economy that have boosted energy and food prices, and supply bottlenecks that have affected our economy badly, that I didn’t at the time didn’t fully understand.

Of course, there was nothing unique about what Yellen being very wrong. She wasn’t the only one saying that inflation was nothing to worry about, and that the central bank should just keep printing money to facilitate unprecedented amounts of deficit spending during peacetime.

Virtually the entire technocrat class of economists were saying the same thing. For example, Yellen might as well have also been speaking for Federal Reserve chairman Jerome Powell who in 2021 repeatedly downplayed the risk of inflation and insisted price inflation would be only “transitory.” It was not until inflation surged to near forty-year highs that Powell’s Fed took any action at all, and the Fed remains far behind the curve.

Moreover, thanks to the Washington’s experts like Yellen, the past decade has been one of the slowest growth decades in American history, also characterized by soaring incomes for Wall Street bankers but stagnating incomes for those near the bottom.

With home prices soaring, travel costs exploding, and food prices surging, it still remains unclear if the Fed intends to take any steps other than the most cautious, timid measures designed to keep Wall Street flush in Fed-created cash.

Although the Fed has been announcing the end of quantitative easing for months, the Fed’s portfolio of government bonds and mortgage securities has so far fallen from its peak by only 0.5 percent over 8 months.

The Fed keeps pointing to jobs numbers which the Fed calls strong—but are actually stagnant compared to 2019 numbers—as evidence things are pretty ok. But for ordinary people, declining real wages are not something we can just shrug off.