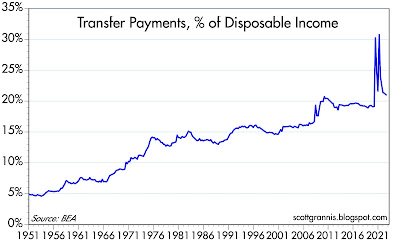 History will record that public policy in the Covid era was extraordinarily bad. Lockdowns, school closures and mask mandates were not only ineffective, they exacted a huge toll in overall health, human suffering, learning loss, and economic damage. As we now know, Sweden, virtually the only country to eschew these policies, experienced the lowest excess mortality rate in the world and the healthiest economy.

Back in April/May of 2020 I predicted that “the shutdown of the US economy would prove to be the most expensive self-inflicted injury in the history of mankind.” I believe I have been fully vindicated on that score.
In an attempt to mitigate the economic damage of these policies, many countries resorted to massive transfer payments designed to make up for job and earnings losses, and to shore up their economies. The U.S. was arguably the leader among nations in this regard. Sadly, as the dust settles we now see that massive transfer payments were the direct cause of the biggest surge in inflation since the inflationary 1970s.
As if that weren’t bad enough, transfer payments (money people receive from the government for which no goods or services are exchanged; e.g., social security, unemployment insurance, stimulus payments) have seriously reduced the incentives to work, leaving the U.S. economy with a shortage of labor and an anemic economy. The Fed can’t fix that—only Congress can.
Chart #1
Federal transfer payments are now running at about a $4 trillion annual rate. Chart #1 shows transfer payments as a percent of disposable income. Over 20% of the disposable income in the U.S. now comes in the form of payments to individuals who don’t have to work for it. By this measure, transfer payments have more than quadrupled since the early 1950s, and they show no signs of shrinking.
Charts #2 and #3 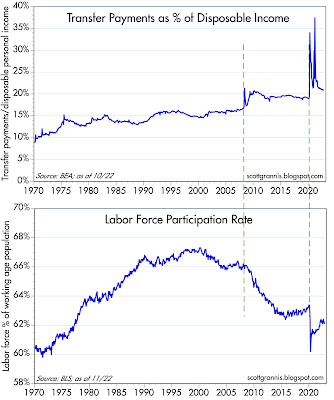 Chart #2 zooms in on the percent of disposable income derived from transfer payments since 1970. Chart #3 is plotted with the same x-axis, and it shows the labor force participation rate (i.e., the percent of the population of working age that is either working or looking for work). The dashed lines strongly suggest that the big decline in the labor force participation rate since 2008 had a lot to do with a huge increase in transfer payments. Not surprisingly, paying people to not work does not encourage them to work.
If we want to restore the economy’s former vigor, we need to reduce transfer payments and increase the incentives to work and invest. We need to incentivize people to work by reducing tax and regulatory burdens.
Chart #4 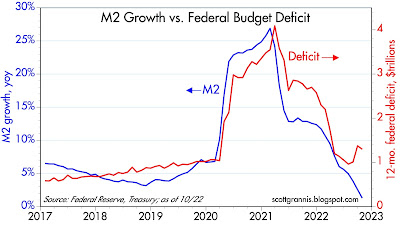 I’ve featured Chart #4 several times in the past 6 months or so. It is designed to show that the huge and unprecedented increase in the M2 money supply was the direct result of massive increases in the federal deficit. The government “borrowed” some $5-6 trillion in order to send out a blizzard of checks to individuals. Most of that money ended up sitting in bank savings and deposit accounts (the main source of M2 growth) because a) people didn’t have an opportunity to spend it, given the lockdowns, and b) the huge degree of uncertainty and fear which dominated the Covid era made nearly everyone acutely risk-averse. Trillions of dollars were stockpiled in the nation’s banks as a result, and now that people don’t want or need all that money it is getting spent, and that is fueling the rise in prices.
Fortunately, the source of this national inflation nightmare is fading. The federal deficit is reverting to trend, and there doesn’t appear to be a Congressional appetite for yet another round of “stimulus” checks.
Chart #5 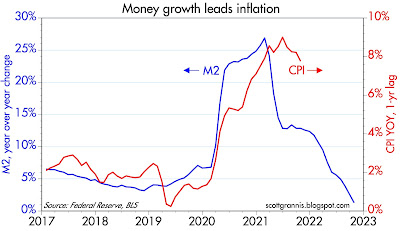 Chart #5 compares the year over year growth of M2 to the growth of the CPI. The CPI line is shifted one year to the left, in recognition of the fact that a) there are lags between monetary policy and its effects on inflation, and b) it took about a year from the time the first round of stimulus checks boosted the money supply until the time the Covid scare had passed and people started spending money in earnest. The chart suggests that it will take at least a year before inflation subsides to a level we’re all more comfortable with. From what I can see, we are on track to a lower inflation future.
What we’ve learned from all of this:
The proximate cause of our inflation problem was a huge increase in federal transfer payments that ended up being monetized, most of it at a time when people no longer wanted to hold so much cash. The economy couldn’t absorb all that extra spending (think supply-chain bottlenecks and labor shortages), so unwanted cash ended up fueling inflation. That source of inflation is no longer operative, since transfer payments have reverted to trend. The excess amount of M2 is being worked off as people spend money and the economy grows (in both real and nominal terms). Chart #3 in this post illustrates the process.
The most important thing the Fed can do today is what they have been doing: raise interest rates. Higher interest rates serve to increase the demand for all the excess money still sitting in bank deposits. Inflation happened because the demand for those deposits fell (because people preferred to spend their money rather than hold on to it) as the Covid scare faded. Without higher interest rates, people would be spending a lot more from their savings, and that would push inflation higher. With higher interest rates, savings and money market accounts have become much more attractive, and people are willing to hold on to the extra money, and that is allowing inflation to cool.
Memo to Fed: don’t overdo the tightening. Inflation is receding, but it will take time to get back to 2%.
Memo to Congress: please stop spending money you don’t have. It doesn’t help the economy and it only threatens to keep inflation from falling. 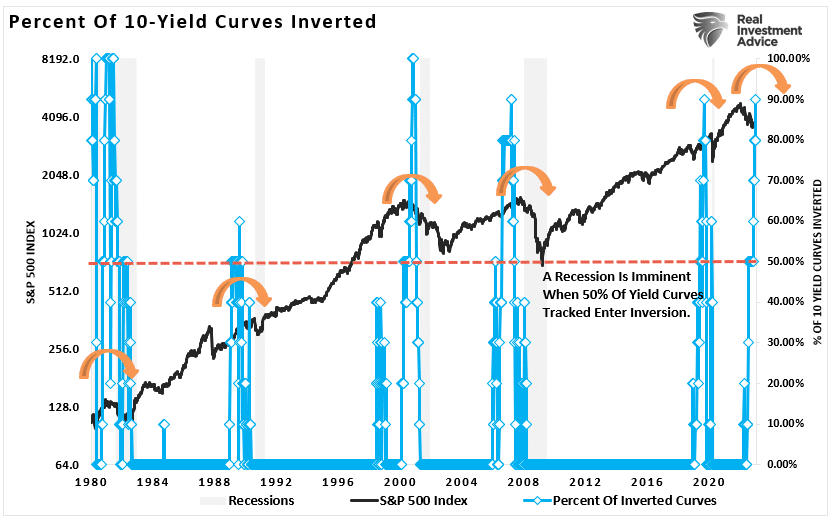 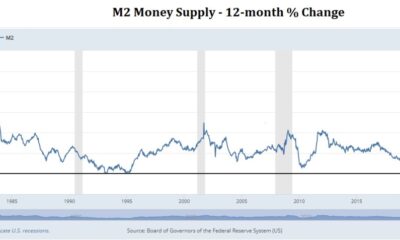 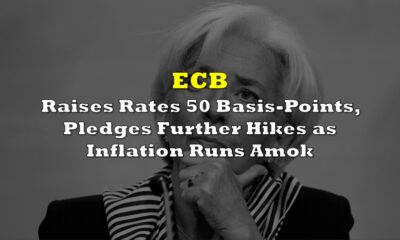 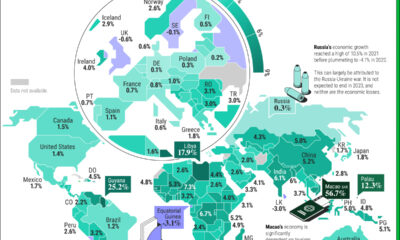