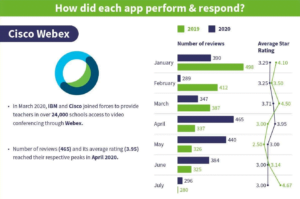 Modern technology has shown its true value during the pandemic, especially during the height of lockdown. The need to still be able to talk to loved ones, host office meetings and continue virtual learning has been high. Video calling software has presented itself as one of the most beneficial pieces of technology in 2020.

However, this unpredicted surge in demand for video communication apps has led to issues from struggling servers as millions login to talk to each other. The performance of communication apps during lockdown has not been as satisfactory as users would have expected.

The Impact Of COVID-19 On Communication Apps

A recent study by 4D-DC analysed over 30,000 app store reviews for some of the top video calling software providers in the first half of 2020 and compared both the numbers and average star rating for the same months in 2019. Further information can be found here: https://www.4d-dc.com/insight/communication-inflation

One of the most favoured video calling communication apps, Zoom is known around the world for helping people connect over any distance. As the UK lockdown was announced, Zoom’s reviews rocketed from 1,755 in March to 2,533 in April-the peak of demand for this provider.

However, it wasn’t all success for Zoom, as popularity rose, so did the temptation for hackers and in June, the news of a security breach broke and saw Zoom’s star rating drop to just 3.72 out of 5. This was widely covered in the media and caused negative PR for the company.

Alongside security issues, Zoom also experienced technical difficulties as their internal servers could not cope with rising usage, leading to even more unsatisfied users.

Cisco Webex joined forces with IBM back in March to provide educators with video conferencing software for over 24,000 schools.

However, they were another provider who could not cope with the high demand of these new users. July saw Cisco’s turn for technical issues and frequent dropouts during use which resulted in an average rating of just 3.0 stars out of 5.

With teachers and university lecturers already strained with teaching methods and resources, these technical issues were the last thing they needed during the pandemic and led to many letting out their frustration within reviews.

Google Hangouts quickly got themselves ahead of the game at the beginning of lockdown, by allowing up to 250 participants within video conferencing and 100,000 viewers for live streaming.

Offices and universities swiftly saw the benefit of this compared to other providers and many made the switch.

However, this was the app with the fewest ratings throughout lockdown, the highest number being just 73 in June.

This doesn’t mean that users were not satisfied with the software on offer, quite the opposite in fact. Google Hangouts finished the study with a very respectable 4.21 out of 5 stars. They were the only provider who did not experience technical issues.

Google is a highly respected company who have incredible technical knowledge within their staffing, it is most likely that they have overcompensated with their servers, even more, the pandemic had occurred.

Microsoft Teams are the newest of all the providers featured in the study and perhaps this lack of experience is what has led to a negative user experience during COVID-19. Ratings increased rapidly throughout lockdown, with 931 in March 2020 and a whopping 1,224 in June 2020.

However, despite increasing team sizes to 10,000, users were not happy. The sudden surge in those using the app meant that the software struggled tremendously during their peak and average star rating decreased to a feeble 2.23 out of 5.

Despite Microsoft being one of the most well-known brands in the world, their recent addition of Microsoft Teams in the past few years seems to still be struggling through teething problems.

Who Was The Winner?

Despite seeing negative press coverage, angered users and technical issues throughout 2020, Zoom has come out on top as still the most popular video calling software this year so far. Reviews increased by 474% in the first half.

Unfortunately, it was the latest video calling software provider, Microsoft teams, who seemed to fail during the rising remand. They finished the study with just 2.56 stars out of 5, despite growth for demand in their services at 15%.

While we all hope the pandemic is over as soon as possible and a second national lockdown will not be needed, it is more important than ever that these providers prepare themselves for the possibility if they want to ensure happy users and avoid technical troubles. External servers are becoming increasingly popular throughout the world and perhaps it is time Zoom, Cisco Webex, Google Hangouts and MS Teams make the investment.

The post The Impact of COVID-19 on the Tech Infrastructure of Communication Apps appeared first on ValueWalk.