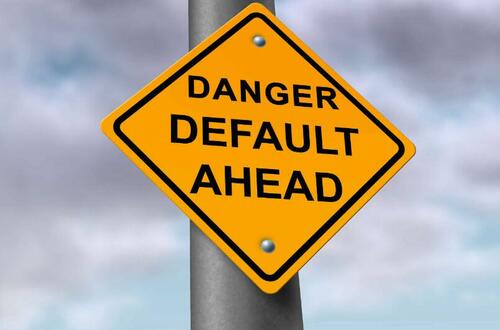 The Only Real Solution Is Default

The destruction of ‘phantom wealth’ via default has always been the only way to clear the financial system of unpayable debt burdens and extremes of rentier / wealth dominance.

The notion that the world could always borrow more money as long as interest rates were near-zero was never sustainable. It was always an unsustainable artifice that we could keep borrowing ever larger sums from the future as long as the interest payments kept dropping.

The only real solution to over-indebtedness since the beginning of finance is default. There are pretty names for variations on default that sound much less gut-wrenching–debt jubilees, refinancing, etc.– but the bottom line is the debts that can’t be paid won’t be paid and whomever owns the debt as an asset absorbs the loss.

Every default is a debt jubilee for the borrower. Whether the default is informal or formalized in bankruptcy, the debt payments are no longer being paid to the lender / owner of the debt.

Every default is a refinancing–to zero. We’ve refinanced the debt so the borrower pays zero and the value of the loan / debt is now zero.

Very few ordinary households own other people’s debts as assets. It’s the wealthy few who own most of the student loans, vehicle loans, mortgages, government and corporation bonds, etc.

Yes, ordinary households may own other people’s debts through pension plans or ownership of mutual funds, but by and large debt is a favored asset of the rentier class, i.e. the wealthiest few.

Recall that debt is the transfer of income from the borrower to the owner of the debt. Borrowing money is like every other form of consumption: when it’s cheap and abundant, we over-indulge. The costs are only apparent after the banquet has been cleared.

The illusion that the global economy could effortlessly add trillions in debt to fund living large forever was based on a brief historical anomaly of zero interest rates enabled by low inflation. There’s a long lag between the vast expansion of debt / consumption and the eventual consequences on supply, demand, risk and price discovery.

The lag time is up and now the consequences are finally visible: the tide of rapid growth in consumption and income required to fund ever-greater burdens of debt has ebbed, and so the global burden of debt–$300 trillion or so– is no longer sustainable / payable.

The favored solutions of the state–printing money or transferring the losses to the public–are no longer viable. Now that inflation has emerged from its slumber, printing trillions to bail out the wealthy is no longer an option. The public, so easily conned into accepting the bailout of the wealthy in 2008, has wised up and so that particular con won’t work again. (“Bail out the super-wealthy now or your ATM machine will stop working!” Uh, right.)

The state is the protector of the wealthy, and so defaults that actually impact the wealthy are anathema. The wealthy will demand the state absorb their losses (recall that profits are private, losses are socialized) The only equitable solution is to force the losses on those who bought the debt as a rentier income stream.

I’ve been exploring the Core-Periphery dynamic for a decade. ( The E.U., Neofeudalism and the Neocolonial-Financialization Model May 24, 2012). This dynamic plays out in a number of ways on a number of levels.

Defaults will play out along the lines of Core-Periphery asymmetries. Some states will be able to “print their way out of default” but most will not, as unrestrained printing of money on such a vast scale would devalue the currency, triggering an even more destructive systemic default.

Debt is a double-edged form of power. Being able to borrow and spend huge sums is an absolutely fabulous way to expand corruption, bribes, exploitation of the powerless, bridges to nowhere and mindless over-consumption, but the habits formed by mindless expansion of debt to fund soaring wealth inequality don’t serve the indebted entities very well when default removes borrowing as a way to pay and play.

Living within one’s means–i.e. net income–is the only solution there has ever been to the end-game of over-indebtedness, i.e. default. Those with relatively secure, diversified net incomes (i.e. the Core) will do much better than those with unstable, limited income.

The destruction of phantom wealth via default has always been the only way to clear the financial system of unpayable debt burdens and extremes of rentier / wealth dominance. Let’s guess that a bare minimum of $100 trillion of the $300 trillion mountain of global debt will default far sooner than most expect. The only question is who will absorb the $100 trillion in losses. Choose wisely, as defaults of debt that are transferred to the public end up bringing down the entire system via political overthrow or currency collapse.

My new book is now available at a 10% discount this month: When You Can’t Go On: Burnout, Reckoning and Renewal. If you found value in this content, please join me in seeking solutions by becoming a $1/month patron of my work via patreon.com.