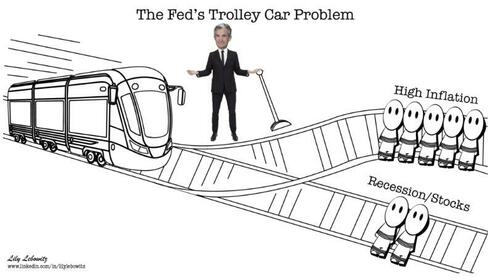 An unstoppable trolley car is barreling down the track. As the switchman, you stand at the junction where the track branches into two and you must choose which path the trolley will follow. Unfortunately, people are tied to both tracks, making the decision incredibly difficult.

The trolley car problem is an ethical question that forces one to choose between two poor consequences.

The Fed and many other central banks face trolley car problems, albeit lives are not on the line. With inflation running hot and economic activity faltering, years of questionable monetary policy force central bankers to make tough decisions. The last time such tricky decisions were made most policymakers were in school or just starting their careers.

Given the extreme debt accumulation of the last 40 years and the heightened speculative nature of financial markets, their choices may be the most important monetary policy actions we see in our lifetimes. These decisions will likely have outsized effects on the investment environment today and possibly for some time.

Let’s move from ethics to physics and introduce a second theory, the rubber band effect. When you stretch a rubber band, it builds up energy. The longer the stretch, the more energy it builds. When the rubber band can’t be stretched anymore, energy releases forcefully in the opposite direction.

For the last 40 years, most developed nations have fostered an unsustainable debt growth cycle. Debt was increasingly encouraged as the primary fuel for economic growth and prosperity. As the cycle wore on, debt became less productive. In a steadily increasing number of cases, the applications of the borrowed money could not support the borrowers’ ability to pay interest or repay the principal on the debt.

Instead of letting the rubber band release its pent-up energy, policymakers chose to keep stretching the debt cycle. They consistently chose a more aggressive monetary policy over letting irresponsible debtors go bankrupt. Meager and even negative interest rates along with QE fostered growing amounts of unproductive debt and allowed marginal borrowers the ability to remain solvent.

The handiwork of the central bankers was possible because there were few consequences for their actions. That changed in 2021.

This two-part article tells the tale of three central banks, their grossly stretched debt cycles, and the trolley car problems they now face.

The Federal Reserve, European Central Bank (ECB), and the Bank of Japan (BOJ) are confronting significant inflation, weakening economic growth, and bear markets in their stock markets. Despite similar challenges, they are taking vastly different approaches.

Central banks fight high inflation by increasing interest rates and reducing their bond holdings (QT). The objective is to stifle demand for goods and slow economic activity. Conversely, weakening economic activity is usually met with lower interest rates and bond purchases (QE) to encourage borrowing and spending. What has worked so well in the past is awkward today. Inflation is on the rise, and economic growth is rapidly slowing. Central banks can fight inflation or try to bolster the economy, but not both.

Making matters more demanding, they must also consider the fallout of their decisions on their respective currencies and capital markets. Adding to the pressure, they must remain highly mindful of the overstretched debt cycle.

The diagram below by Lily Lebowitz helps us visualize the Fed’s trolley car problem. Jerome Powell can tackle inflation but risk a recession and lower stock prices. Or he can try to avoid a recession and risk persistently high inflation.

At his June 15, 2022, FOMC policy press conference Jerome Powell made it evident the Fed will aggressively use its tools to their fullest extent to reduce inflation back to 2%. He was also clear unemployment may rise as a result.

The Fed desperately wants to break inflation’s back. The problem making their task very difficult is that they grossly underestimated the persistent nature of inflation.

Throughout 2021, speculative activities flourished, economic activity was brisk, and inflation rose. Many, including ourselves, said the Fed must quickly pull back on the monetary policy reins. Despite stimulus-driven demand and significant supply line problems, the Fed kept interest rates at zero and bought $120 billion in bonds per month.

The price for their blunder is higher and more persistent inflation than would have been. As a result, economic activity stagnates, asset prices fall, and consumer/business confidence erodes rapidly.

For the last 20 years, as shown by the blue dots, the Fed was often tasked with reducing unemployment and frequently wanted more inflation. Other than a brief instance or two, the Fed never worried about high inflation.

As the yellow dots highlight, the Fed must now tackle the highest inflation rates in 40 years while the unemployment rate is slightly below target. Based on Powell’s recent comments, he is willing to increase unemployment to bring inflation back to its target.

First-quarter GDP was negative 1.6%. Based on the Atlanta Fed’s GDPNow forecast, second-quarter GDP growth may also be negative.

U.S. stock markets are in bear market territory as investors watch the Fed tighten policy despite faltering economic growth. For most investors, this is new ground. Over the last 20+ years, they grew accustomed to a Fed that reliably eases at the first hint of economic weakness. The new paradox is causing investors to lose confidence. Making matters more onerous for the Fed, bond yields have risen rapidly, adding to economic pressures and financial stability.

As a result of the pandemic and continued debt growth in the post-financial crisis era, the economy now has twice as much government debt as a percentage of GDP than in 2008. Corporate debt to GDP is also at record highs. The economy and livelihood of many borrowers are now much more reliant on low-interest rates. Unlike 2008, when lower interest rates and QE saved many struggling borrowers, reducing interest rates and QE are not viable as inflation is raging.

The Fed is opting to send the trolley car on the recession track and hopefully temper inflation. This harsh decision doesn’t bode well for the economy or financial markets. However, there is hope.

The Fed has been accommodative in the past when financial stability and economic problems arose. As such, will the financial markets and the economy cry uncle loud enough to get the Fed to change its policy?

It is possible the Fed partially un-stretches the rubber band with limited economic and market costs. However, that ability rests on inflation. If inflation declines enough, the Fed may be able to revert back to an easy monetary policy and keep the extended debt cycle intact.

If inflation is not as friendly, though, the Fed may continue to travel down the trolley track which sacrifices the economy and financial markets to tame inflation. That is the scenario that snaps the debt cycle rubber band and keeps us up at night.

“Until we see tangible evidence of a decline in inflation back to target, nobody should count on central bankers to reverse course.” – Brett Freeze

We end part one with a quote from President John F Kennedy.

“There are risks and costs to action. But they are far less than the long-range risks of comfortable inaction.”

As we detail above and discuss further in part two, there are significant risks to the actions the Fed is taking, and other central bankers are contemplating. However, as Kennedy says, doing nothing, which has been the status quo, presents even greater risks.