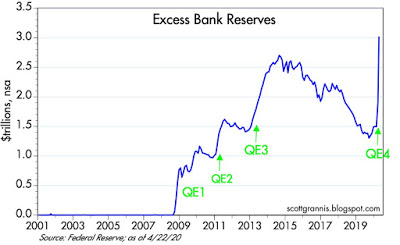 The Covid-19 crisis is not over yet, but the light at the end of the tunnel is getting much brighter. Key financial indicators are moving in a healthy direction, and most countries are seeing clear signs that the viral outbreak is under control.

Here are some chart updates, followed by my impressions of the key things we have learned so far about the coronavirus:

As Chart #1 shows, the Fed has responded rapidly and decisively to the Covid-19 crisis by almost doubling the supply of excess bank reserves in the span of about 6 weeks. This was accomplished by massive purchases of notes and bonds. As with other periods of Quantitative Easing, this most recent move was not massive money printing: it was simply the transmogrification of notes and bonds into bank reserves, which are effectively T-bill substitutes. The economic shutdowns that were sparked by the novel virus caused a sudden and dramatic increase in the world’s demand for safe assets, and it looks more and more like the Fed and other central banks have done their job and accommodated the increased money demand with an increased supply of risk-free liquidity. Central bank actions effectively short-circuited what could have been another threatened collapse of financial markets. Bravo! 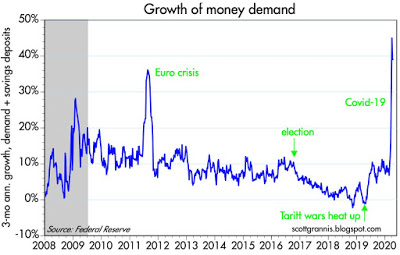 Chart #2 shows the 3-mo annualized growth in bank savings and demand deposits. This is another way of demonstrating how strong the demand for money has become (off the charts strong) given the uncertainties of the virus and the economic shutdowns.
Chart #3 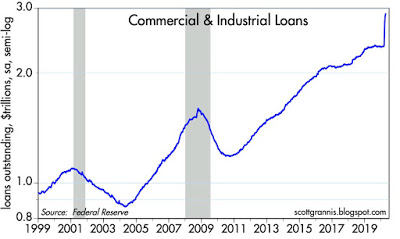 The Fed’s huge injection of bank reserves facilitated a surge of lending to small and medium-sized business, as Chart #3 shows. This in turn backstops businesses that must survive a period of zero revenues as a result of being forced to close their doors for a month or so.
Chart #4 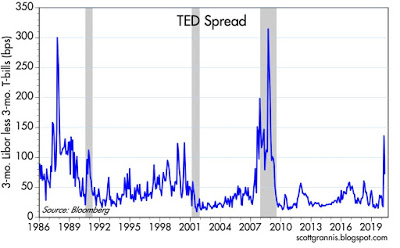 Chart #4 shows the TED spread—the difference between 3-mo Treasury bill yields and 3-mo LIBOR. This spread is a barometer of the market’s confidence in banking systems (tighter spreads = more confidence, and vice versa). Spreads are still elevated, but have come well off their initial surge, and they are nowhere near as wide as they were during most of the 2008-9 financial crisis. The main area of concern for credit markets remains the energy sector, since oil prices have tumbled. 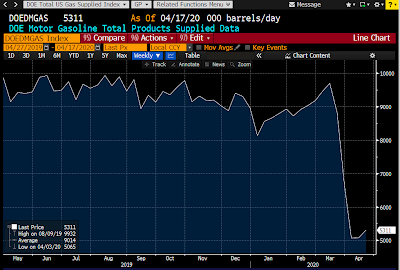 The huge decline in oil prices can be traced to global economic shutdowns. In the US we saw an almost immediate 50% drop in automobile traffic, and that shows up in Chart #5, which shows the plunge in motor gasoline supplied (in thousands of barrels per day terms). Recently there are signs that drivers are beginning to return to the highways, and this will only increase as more and more states lift their lockdowns. That in turn will ease the strain on bulging gasoline inventories and sooner or later allow oil prices to move back in the direction of pre-crisis levels. 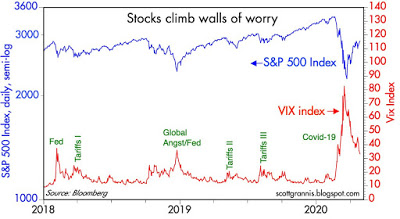 Chart #6 compares the level of the S&P 500 index with the Vix index, a measure of the market’s fear, uncertainty and doubt. Fears have declined significantly from their peak of about a month ago, but the Vix is still quite elevated. Equities have recovered just over half of what they lost, which is not too bad, given the magnitude of the economic slowdowns that have occurred all over the world. Arguably, the Fed gets a good deal of the credit for limiting the equity market’s panic. How? By supplying plenty of liquidity. Presumably, this minimizes the hurdles that economies will have to clear in order to successfully reopen. At this point, all that stands in the way of a reopening are the signatures of the nation’s governors lifting their lockdowns.
Chart #7 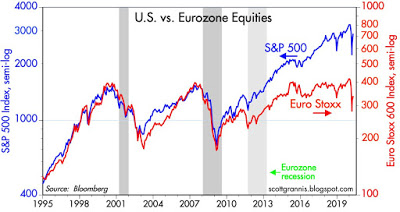 US equity markets have fared much better than their Eurozone counterparts, as Chart #7 shows.
Chart #8 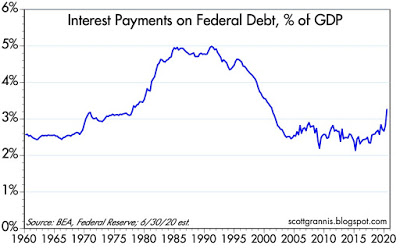 Chart #8 shows my calculation of the burden of our federal debt (debt owed to the public, which now stands at $18.8 trillion). I’ve estimated total interest costs for the debt for the period April through June, and I’ve guessed that nominal GDP will decline by about 15% in the first half of this year. Repeat: these are my estimates and they are very likely to be wrong to some degree since it is extremely difficult at this point to judge how badly GDP will be affected by economic shutdowns. Regardless, I think the magnitude of the debt burden is very unlikely be much higher than what I estimate, and even then it will still be much lower than it was for most of the 1980s and early 90s. In short, we are not facing imminent financial disaster as a nation. 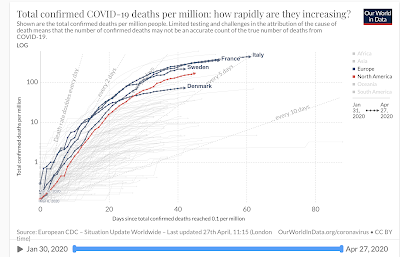 I used ourworldindata.org to produce Chart #12. I selected 5 countries and compared them on the basis of total covid-19 deaths per million of population. The dotted red line is the US. Note that all 5 countries (indeed almost ALL countries) have seen a pronounced slowdown in the rate of growth of covid-19 deaths. This shows up as a flattening of the curve, which uses a semi-log scale for the y-axis. In short, the growth of deaths has slowed dramatically, which proves that the virus is no longer spreading at dangerous geometric rates. Note also that the experience of Sweden, which has not resorted to the use of mandatory lockdowns, is substantially similar to that of other European countries and to the US. The virus is running its course, with or without government shutdown help.

What follows is my summary and impressions of the emerging facts surrounding the covid-19 crisis:

More and more analysts are finding that shutdowns haven’t resulted in better results than non-shutdowns. Sweden is the perfect example.
As more and more testing is conducted (especially antibody testing), the denominator of the covid-19 fatality rate (i.e., the total number of people infected) is growing rapidly, and the overall fatality rate is falling. Current estimates place it as low as 0.02% and as high as 0.2%. (The fatality rate of the common flu is 0.1%.)
As the number of those infected and with covid-19 antibodies soars, we are seeing that the vast majority of those who become infected either never experience symptoms or have only mild symptoms.
For anyone who is healthy and under the age of 65, the risk of death by covid is negligible. Thus it is foolish to quarantine everyone, especially those of school age. Isolating children only delays the buildup of herd immunity and raises the risk of a second wave when the flu season starts in October (children have almost a zero chance of dying from covid-19).
The virus is highly contagious but rarely deadly, except for those who are 65 and older and have a pre-existing health condition.
Sunshine is the best disinfectant. Being indoors or in any confined space with others for a sustained period of time is unwise and risky, especially for those in the high-risk categories. Thus the mandate to “shelter at home”, and to close parks, beaches and trails was exactly the wrong course of action.
The number of daily new cases is growing by a much slower rate each day or declining in almost all countries and states. Thus, we have almost certainly seen the peak of the pandemic.
The number of days it takes for covid deaths to double (a bullet-proof indicator of how fast the virus is spreading) is increasing dramatically almost everywhere. Thus, we can be almost certain that the virus is no longer spreading geometrically. One factor driving this is seasonality, as temperatures warm up and people are exposed to more sun. The other factor is growing herd immunity. Better medical attention helps as well (including therapeutics such as HCQ). In the early days of the pandemic, days-to-double began at 2; in the US it’s now 23, in the world 18, in the world ex-China 15, in New York 14, In Italy 43, in France 33, in Sweden 30, and in S. Korea 67. Note that Sweden (with no shutdown) is on par with France and better than Italy, both of which instituted dramatic shutdowns.
21 states now meet the federal “reopening” criterion of a 14-day downward trajectory of daily new cases. 22 states meet the criterion of a 14-day downward trajectory in the percentage of tests with positive results. California already meets the second, but not the first. New York (yes, NY!) meets both.
The initial predictions of deaths and hospital over-crowding were so far off the mark (i.e., way too high) as to be almost criminal. The biggest problem most hospitals face today is bankruptcy because so many beds are empty. The mandate that hospitals should accept only covid patients was also criminal. Furthermore, the projected shortage of ventilators—a major factor driving the decision to shut down the economy in order to “flatten the curve”—was a criminal distraction, because it is now clear that curves have flattened everywhere and ventilators are only marginally helpful in preventing deaths. New York is now giving away tens of thousands of ventilators that were never used.
It is now painfully obvious that “The shutdown of the US economy will prove to be the most expensive self-inflicted injury in the history of mankind.™”
It should also be painfully obvious that we should reopen economies asap.

UPDATE: For more information about the risks of being outdoors, indoors, and of a certain age, see Heather Mac Donald’s recent excellent article here. It’s high time we cease wearing masks while walking outdoors or driving our cars.