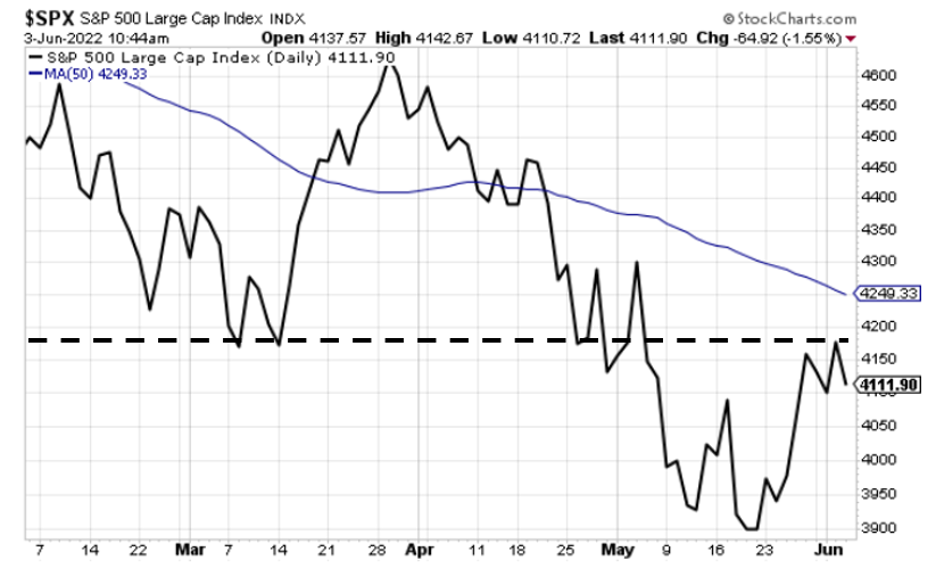 Did the S&P bottom back in May? … what this technical indicator is telling us … what to expect from the S&P has we enter summer

As I write Friday around lunch, stocks are down based on the jobs report out this morning.

While this seems like good news, we’re back to a “good news is bad news” environment.

In other words, the stronger the economy, the more pressure on the Fed to raise rates in order to slow down the economy in order to dampen inflation. Unfortunately, the higher that interest rates go, the greater the potential for all sorts of undesired economic fallout.

However, even with today’s selloff, the S&P remains about 5% higher than its low back on May 20th.

Did May 20th mark the bottom?

That’s the question many investors are wrestling with today.

Earlier this week, our technical experts John Jagerson and Wade Hansen of Strategic Trader pointed toward a reason why that might have been the low (for now, at least).

It has to do with something called “capitulation.”

Here are John and Wade explaining:

The bearish argument goes that a bottom isn’t reached until the bulls finally surrender.

This idea comes from technical traders (who analyze charts over financial statements to make investing decisions) that look for the point of “maximum pessimism.”

That cheery-sounding state is reached right before the market rallies. So, if we can tell when traders have capitulated, we can identify the turning point in the market.

Obviously, the challenge is correctly identifying a capitulation point. Who’s to say when the last bull has finally given up?

While we don’t have that information, John and Wade tell us there’s a clue that gives us a decent idea as to whether we’ve seen bullish investors capitulate…

***Does a study of historic volume suggest we’ve turned the corner?

We’ll answer that in a moment, but first, for newer Digest readers, John and Wade helm our trading newsletter, Strategic Trader.

This premier trading service combines options, insightful technical and fundamental analysis, and market history to trade the markets, whether they’re up, down, or sideways.

So far in 2022, they have closed out 54 trades. Of those, two broke even, and the rest have been winners, averaging an annualized return of 141%.

A huge congrats to all the Strategic Trader subscribers who have not only sidestepped this year’s market carnage, but potentially more than doubled their trading account.

Returning to the idea of volume and capitulation bottoms, here are John and Wade with the overview:

What most investors agree about is that capitulation — or the market’s turning point — usually happens with a big volume spike. (Volume tells us how many shares are traded per day.)

As you can imagine, if the last bulls finally give up, they will sell stock in a panic, and the number of shares traded that day will skyrocket.

The biggest down day we have had in the last month was on Thursday, May 5, when 13.6 billion shares were traded.

However, investors traded 19 billion shares on Mar. 20, 2020, when the market pivoted higher from the COVID-19 panic.

But John and Wade point out that if we look at volume in terms of the total value of shares traded on the most recent down days in the market, then the selling on Friday, May 20, just before the rally, was almost20% above the “capitulation” of 2020.

Here they are with the takeaway:

That means traders were more active over the last two weeks than they were at the depths of the selling in 2020 or 2018!

Pundits in the financial press are arguing that the market can’t have hit a low yet because volume hasn’t truly spiked.

But if we look at things from the perspective of value, then there has been more than enough selling (if such a thing can be defined) to clear out the weaker traders and provide a floor for the market.

***Does this mean it’s time to become a full bull and put all your chips back on the table?

While calling themselves “cautiously optimistic” about the market heading into the summer, they’re expecting volatility and what could be some sideways channeling.

Back to their update:

…We don’t anticipate another leg to the downside until later this year. The outlook that seems most likely at this point is a channel, something like the market conditions in 2010 or 2015.

Below, we look at the resistance range John and Wade reference.

Also, we’ve added the 50-day simple moving average (SMA) line (in blue). This is an additional point of resistance we should watch that’s only slightly higher than the range John and Wade identified.

As its name suggests, a SMA is a line showing the average reading of some number of the prior days’ worth of market prices. In this case, 50 days, which is a medium time horizon.

SMAs can be important psychological lines-in-the-sand for investors that help identify price trends for a stock (or an entire market). They can also serve as support or resistance points, impacting traders’ investment decisions.

Now, even though John and Wade believe we could run into resistance around 4,170, there’s an additional technical indicator that might help the S&P break out – the RSI.

Below, we look at the S&P’s current RSI. As you’ll see, it’s been climbing since mid-May, with plenty of room to run higher. But it needs to push through this current level of about 50.

Wrapping up, though John and Wade are neutral on immediate market conditions, they’re ready to turn bullish per the data.

On this note, I’ll let them take us out today:

This week, our outlook is neutral, and our purpose is to be clear about why we are focused on income rather than adding risk this month and why we think trading for a neutral market makes sense.

However, if there is anything consistent about the market, it’s change. Even accounting for a weakening hiring in the manufacturing sector, growth is still positive and consumer spending is on the rise.

If the rate of change in earnings, hiring, and spending are still positive, we will be ready to get a lot more bullish quickly if June’s economic numbers start to turn the corner.

The post This Clue Points Toward a Bottom appeared first on InvestorPlace.