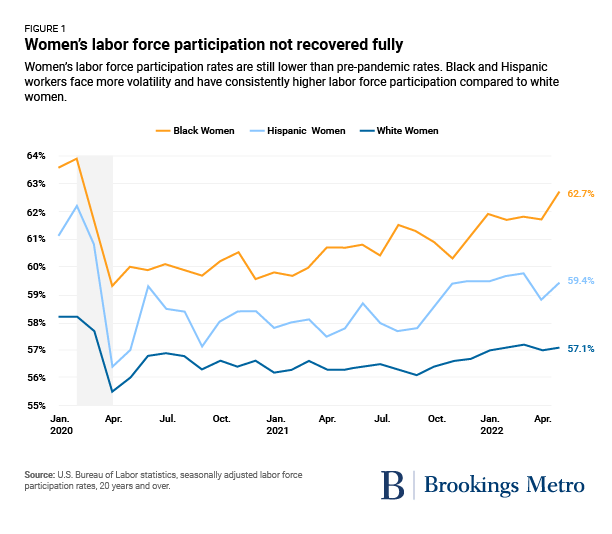 In the past two months, the U.S. economy has added a total of 826,000 jobs, according to the latest Bureau of Labor Statistics (BLS) numbers for May and upwardly revised numbers for April. During that same period, overall unemployment has held steady at 3.6%. Black unemployment is still almost double that (at 5.9% in April and 6.2% in May), but the Black labor force participation rate has increased, as has the overall number of Black workers currently employed.

Despite solid job gains, inflation has reached a 41-year high of 8.6%, and households are reeling from unrelenting increases in the price of gas, rent, and food. June’s preliminary Index of Consumer Sentiment plummeted 8 points from May, to 50.2—the lowest rate since the 1980 recession, revealing that households are deeply worried about their financial circumstances.

In this blog, we highlight three key economic concerns for the summer, including women leaving the labor force, economic contraction erasing job gains by Black workers, and the heightened risk of food insecurity.

Will more women leave the workforce this summer than usual?

In the past three months, 465,000 women aged 20 and over have entered the labor force. In May alone, 397,000 women entered the workforce, 44% of whom were Black. This surge of women into the workforce is helping regain jobs lost during the pandemic, but labor force participation rates for women—including white, Black, and Latino or Hispanic women—are still below pre-pandemic levels.

Despite the recovering trend in women’s employment, research by the National Women’s Law Center found that almost one-third of the jobs women regained since the start of the pandemic are in the leisure and hospitality sector—a finding consistent with our prior analysis on recent job creation. These jobs are low-paying, have volatile schedules, and are vulnerable to economic downturns.

In addition, female labor force participation typically drops every summer as school closings push many mothers to reduce hours or quit their jobs. A recent paper found an average summer drop of 1.1% in the employment-to-population ratio among prime-age women. This drop is pronounced among mothers of school-age children who do not have affordable or reliable access to child care. The ongoing pandemic will likely continue to exacerbate this cyclical trend, consistent with our prior research, including our recent survey data revealing that child care concerns and inflexible work schedules continue to hurt female workers.

Runaway inflation pushed the Federal Reserve to adopt a 75-point interest rate hike at its June meeting to regain the confidence of investors. If the Fed follows the recommendation of some commentators to induce a 1980s-style recession through a series of steep interest rate hikes in order to reduce consumer spending and stabilize prices, Black workers will bear the brunt as companies downsize—just as they did in 1983, when the unemployment rate reached 20% for Black men and 16.7% for Black women.

But even if the Fed remains a stabilizing force for the broader economy, the market itself may not remain calm. Major companies such as Redfin, Twitter, and Coinbase have rescinded job offers, while several leading tech companies such as Robinhood and Netflix have announced layoffs as a cost-saving strategy. But if industry leaders and investors take this as a broader signal and panic based on negative feelings about the current economy, it could create a ripple effect of fear across sectors and lead to layoffs and a recession.

Another worrying indicator is that BLS’ broader measure of labor market weakness, the U-6 unemployment rate, rose to 7.1% in May, driven by frictional unemployment and a 295,000-person increase in part-time workers. This coincided with the retail sector shedding 51,700 jobs. Major retailers have noted that cutbacks in household spending left them with bloated inventories; for example, Target cut profit expectations twice in a single month and surprised investors with a mass sales campaign aimed at trimming inventory. This is a leading indicator that the sector will shed additional jobs. Additionally, big-box retail chains, including Amazon, hired more workers than normally needed to avoid hiring delays and COVID-19 illness disruptions amid the tight labor market. But Walmart’s CEO recently explained that this strategy has led to overstaffing concerns—suggesting that even without diminished spending, job cuts will continue.

All of this bodes poorly for Black workers, particularly Black men. In the past three months, Black men have gained 56,000 jobs, and their current labor force participation rate of 68.9% is now higher than it was prior to the pandemic. While some of these job gains reflect a slight uptick in the number of Black men entering the labor force, most represent men who had previously been in the labor force and have now been rehired. As Figure 2 shows, Black men only benefited from the labor market recovery at the tail end of it.

Even a slight economic contraction could imperil these recent job gains for Black workers, especially workers crowded into low-wage cyclical sectors like retail. The current labor market—in which there are more job openings than there are job seekers—has pushed firms to tap into Black talent that they would otherwise overlook due to discrimination. But if the labor market weakens, additional Black workers will be less likely to be hired, and Black workers who were recently hired will be among the first to be let go during layoffs.

Will depleted savings and the end of the school year heighten food insecurity?

As household savings are quickly depleted due to inflation, the risk of food insecurity is heightened. In April, the personal savings rate for Americans hit a low of 4.4% (compared to 33.8% in April 2020 and 12.6% in April 2021). At the same time, according to the Federal Reserve Board’s Consumer Credit report, revolving debt (such as credit card debt) increased by an annualized rate of 19.6%, while non-revolving debt (such as car loans and mortgage loans) rose at a slower rate of 7.1%. Overall household debt increased at an annual rate of 8.3% in the first quarter of 2022. Taken together, these metrics suggest that inflation is making it harder for families to sustain current levels of consumption while also putting money away, even as they face markedly lower savings to pay for necessities.

It is likely that without the advanced Child Tax Credit payments or any other form of income stimulus, many low-income families will face a harsh summer. Low-income parents are caught in an impending storm of precarious retail jobs, over-representation in part-time jobs, and a weakened child care economy. This is especially true for families with school-aged children who benefited from free meals during the school year.

In the last few months, Federal Reserve Chairman Jerome Powell has told reporters that he believes the Federal Reserve can engineer a “soft landing”—in other words, curbing inflation without throwing the economy into freefall. But even if the Fed can pull this off, it will not fully address the three concerns we identified in this piece.

Beyond the Fed’s monetary policy actions, we need robust fiscal policies such as stronger unemployment insurance and a renewed monthly Child Tax Credit to ensure no one will slip through the cracks. Ultimately, responding to food and housing needs will require a collaborative effort from the federal government, states, philanthropy, and local community-based organizations to support vulnerable families in the coming months. 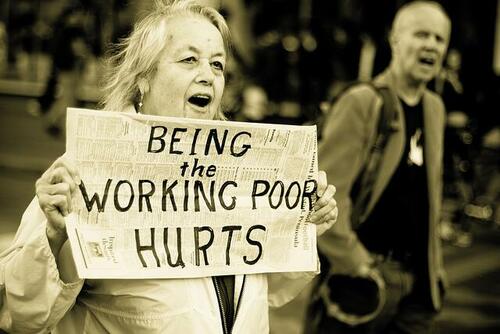 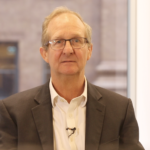