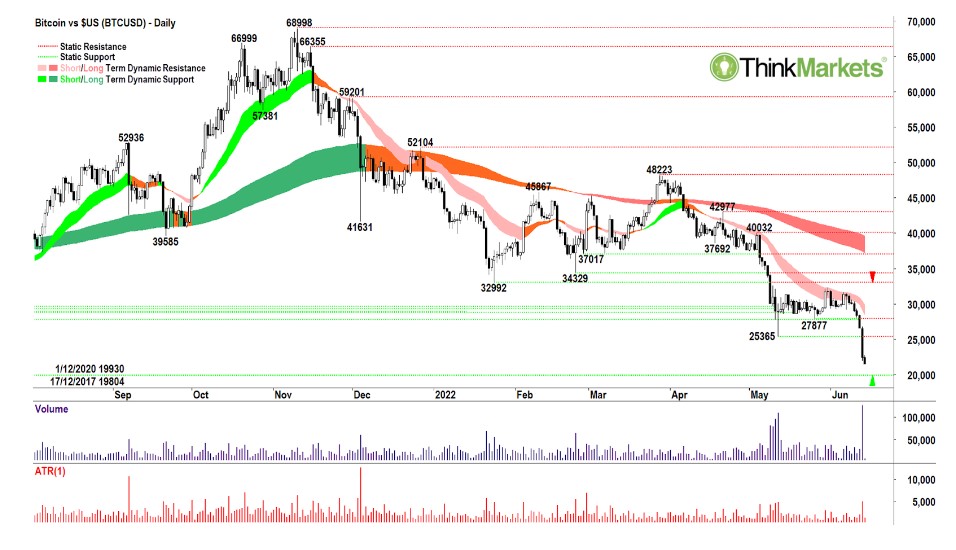 Welcome to the Three Ts with CoinJar. Each fortnight we explore a big Theme, an interesting Trade and some good, old-fashioned Technical Analysis (courtesy of Carl Capolingua of ThinkMarkets Australia).

Time for a lie down

I mean, far out. What do you even say at this point? The financial world is having the collective equivalent of a grand mal seizure and crypto, patron saint of easy money, is leading the charge into the abyss.

Ethereum is trading 20% below its 2017 bull run peak. Bitcoin is flirting with its all-time high from the same period. Michael Saylor is currently sitting on a more than US$1 billion loss.

Most altcoins are already 90% down and, hell, another 90% doesn’t seem out of the question. If this is in any way reminiscent of the dotcom crash, we can expect that a lot of crypto will just straight up go to zero.

Crypto’s woes are, however, being exacerbated GFC-style by the market’s addiction to leverage. (In this analogy, the LUNA-UST collapse was the Bear Stearns starter’s pistol on the crypto industry’s great reckoning.)

Yield farming outfit Celsius, which recently boasted that it had more than US$20 billion in assets under management, has paused withdrawals as it tries to avoid having its customers’ assets liquidated. Tron’s algorithmic stablecoin has lost its peg. One stETH no longer buys 1 ETH.

Unsustainable DeFi yields are the new subprime mortgages. Leverage isn’t causing the downturn, but it is exacerbating it – and we’re unlikely to see anything good happen until a whole lot more is flushed out of the system. Which, to be clear, will be a long-term positive for crypto.

But, on the plus side, every day of blood brings us that much closer to the end of the pain. Right?

I’d say we BOTTOM this week

I don’t care about bottom calls But, I’m sure the MAJORITY will get this wrong

Canary in the coalmine

Unlike previous crypto meltdowns, the one saving grace this time around is that we’re sharing the pain with the bastions of traditional finance.

A few months back, BitMEX founder Arthur Hayes made the argument that Bitcoin was the world’s last free market, the only market not distorted by tariffs, subsidies and other governmental policies that slow the transfer of value.

The implication is that Bitcoin acts as a leading indicator for what’s happening more broadly elsewhere. Exhibit 1: Bitcoin commenced its descent in November last year, two months before the stock market also realised that gravity was “a thing”.

Since then, the correlation between Bitcoin and the stock market has been at all-time highs. So, want to know when things might start getting better across the board? Look for the Bitcoin bid. It might show that money is finally ready to play again.

Arthur is watching for three data points to pick the bottom:

Two out of three are simple to quantify; if you have a measure for sentiment, then you could make …
1/ https://t.co/c7VPkc3FT7

And now for some *shudder* charts. This week we have ThinkMarkets Australia market analyst Carl Capolingua dishing out the good stuff.

First off, Bitcoin. Having blasted through the support at US$25.3k, that now becomes the ceiling which needs to be broken before any mid-term relief might be found. However, the candles suggest we’re in the midst of full-blown capitulation and should be looking to the 2017 high of US$19.8k or, if that fails, the 2019 high at US$13.8k.

Ethereum, according to Capolingua, is looking even worse. Having punched through the 2017 bull market high at US$1460, as well as the Feb 2021 low at US$1290, capitulation is very much in process – but looks like there could be plenty of gas in the tank.

US$1040 could offer some demand, although it seems US$900 is a more likely short-term target. Break back above US$1700 and we can talk about a return to bullish conditions.

CoinJar is Australia’s longest-running crypto exchange. Since 2013, CoinJar has helped more than half-a-million Australians buy and sell billions of dollars in cryptocurrency.

ThinkMarkets is a premium multi-asset online brokerage that provides quick and easy access to a wide range of markets including forex, CFDs on equities, cryptocurrencies, commodities, indices, futures and more.