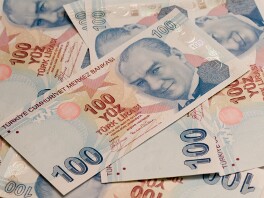 The Central Bank of the Republic of Turkey raised its policy rate (one-week repo auction rate) from 8.25% to 10.25%. That was a total surprise to analysts as most of them were expecting the central bank to keep rates unchanged. And even those, who believed that a hike is possible, did not anticipate such a big increase.

The central bank talked about the strong recovery of the Turkish economy from the impact of the COVID-19 pandemic:

Economic activity is recovering markedly in the third quarter owing to gradual steps towards normalization and the strong credit impulse.

Yet the recovery resulted in spiking inflation, which ultimately forced the bank to lift rates for the first time in two years:

Yet, as a result of fast economic recovery with strong credit momentum, and financial market developments, inflation followed a higher-than-envisaged path. The Committee assessed that the tightening steps taken since August should be reinforced in order to contain inflation expectations and risks to the inflation outlook. Accordingly, the Committee decided to increase the policy rate by 200 basis points to restore the disinflation process and support price stability.

The bank also pledged to use all the instruments in its disposal to maintain the disinflationary process:

The Committee assesses that maintaining a sustained disinflation process is a key factor for achieving lower sovereign risk, lower long-term interest rates, and stronger economic recovery. Keeping the disinflation process in track with the targeted path requires the continuation of a cautious monetary stance. In this respect, monetary stance will be determined by considering the indicators of the underlying inflation trend to ensure the continuation of the disinflation process. The Central Bank will continue to use all available instruments in pursuit of the price stability and financial stability objectives.

The hike was especially surprising considering that Turkish President Recep Tayyip Erdogan, who has a big influence on the central bank, is a vocal opponent of high interest rates. It is unclear whether he approved the hike. Higher borrowing costs should provide support to the lira, which was rapidly weakening, adding to inflation pressure. But at the same time, they will dampen economic growth, which is one of the reasons why the Turkish central bank was reluctant to raise rates earlier.