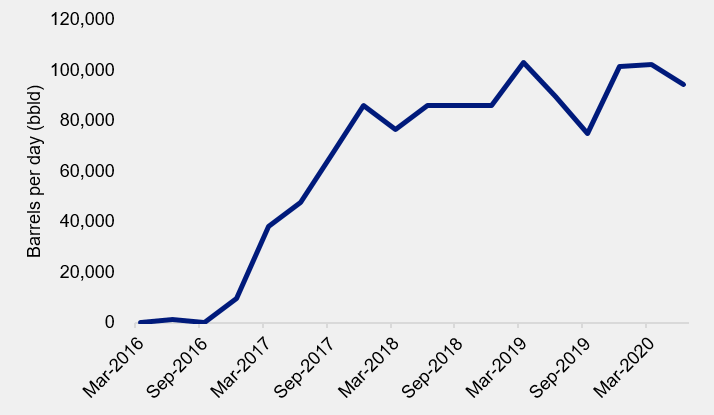 We encounter petroleum1 products on an almost constant basis – like something as inconspicuous as an iPhone case or as essential as indoor plumbing. Though petroleum is synonymous with automobiles, this represents less than half of petroleum demand. Perhaps surprisingly, an almost equivalent amount of petroleum demand is derived from non-transportation sources. Where else do we encounter petroleum products? How about in milk cartons, golf balls, MRI scanners, lipstick, crayons, and solar panels.

Regardless of its ubiquity, petroleum is often vilified for its role in the environment, primarily from use as transportation fuel. Today, transportation accounts for 14% of global greenhouse gas emissions, with approximately two-thirds coming from cars and trucks.2 Agriculture, industrial, and power are all bigger emitters. As a feedstock for materials and polymers, the problem with petroleum here is not so much with emissions – since it is chemically reformulated versus combusted – but disposal. Though progress continues towards reducing the environmental impact, petroleum is nevertheless a vital component to a functioning global economy and to sustaining and improving living standards globally. In this blog we explore the essential role of petroleum products, what is being done to minimize the negative impacts, and the practical reality of alternatives.

Petroleum meaningfully improves the standard of living for people globally

Petroleum is used as feedstock to make everyday products, ranging from products large and small, recreational and essential. In healthcare, this includes medicine bottles, IV bags, ventilators, personal protective equipment, and hand sanitizers. For recreational items, these include tents, bikes, canoes, rope, backpacks, and fishing poles. Other applications include detergents, home insulation, carpets, furniture, food packaging, diapers, and vehicle bumpers and instrument panels. The list is endless. Petroleum products are used in so many applications because it can be engineered – optimizing its features for being lightweight, durable, corrosion-resistant, and cost-effective – to serve a specific purpose.

But aside from these every day, often mundane aspects, petroleum is essential in providing billions of people with humane living standards: clean water, sanitation, and clean burning fuel, to name a few. For example, petroleum is a feedstock to produce polyvinyl chloride, commonly known as PVC. Indoor plumbing and water infrastructure rely heavily on PVC pipe because of its durability, moldability, recyclability, and cost-effectiveness. Without PVC, more expensive alternative materials, such as steel or copper, would inhibit the proliferation of indoor plumbing and water infrastructure, specifically in developing nations. According to the World Health Organization (WHO), two billion people still do not have basic sanitation facilities such as toilets or latrines, and without effective, low-cost materials such as PVC, these basic sanitation needs will go unmet much longer than necessary.

Propane is another example of petroleum being used to meaningfully improve lives. According to the WHO, approximately three billion people still cook with solid fuels such as wood, crop wastes, and dung. These cooking fuels are detrimental to your health, with an estimated four million people dying prematurely each year from solid fuels.3 In India, approximately 78% of the population in 2015 used solid fuels, leading to an estimated half a million deaths a year, with women and young children the most vulnerable. In 2016 the Indian government launched Ujjwala, which provided both access and subsidies for propane. As a cooking fuel, it burns much cleaner and more efficiently than solid fuels. Since it was easily distributed in cannisters provided for free by the government, propane coverage has now reached approximately 90%, immediately improving the lives of hundreds of millions of people there. The Ujjwala program remains popular domestically. Today, India is amongst the largest propane importers, supplied in large part by US exports.

Figure 1: US LPG exports to India

Petroleum alternatives exist, but so do tradeoffs

Hypothetically, a “green” solution for replacing harmful solid fuels predicated on renewable power would have a smaller carbon footprint than propane, but practically, that would mean hundreds of millions of people would suffer for years, if not decades, waiting on solar and wind farms, transmission lines, and distribution infrastructure, nevermind being able to afford an electric stove. Instead, utilizing propane not only results in meaningfully better health outcomes for millions of people today, but also immediately improves the environment. If two billion people were to switch from wood to propane, carbon emission would be reduced by approximately 415 million tons annually – about the emissions from the United Kingdom – and deforestation would decline by approximately five million acres – equivalent to approximately 40% of annual global deforestation.4

Plastics, which are almost entirely derived from petroleum, have been essential in increasing energy efficiency, reducing food waste, and enhancing health and safety. Plastics are versatile, durable, cheap, and lightweight, and common applications include packaging (e.g., clamshell boxes, bubble wrap, protective film) and food-service storage and preservation (e.g., milk jugs, bread bags, yogurt containers). Though alternatives such as aluminum and glass do not utilize petroleum as a direct feedstock, the tradeoff of their (i) high heat requirements (provided mostly from coal and natural gas) during production and (ii) additional weight5, thus requiring greater energy for transport, renders their overall carbon footprint significantly greater than plastics.

Plastics are currently amongst the largest sources of petroleum demand and are expected to be the largest source of growth going forward, particularly in emerging markets. Consider, plastic consumption per capita in North America is 126kg, which is considerably higher than Latin America, Asia ex-China, and the Middle East and Africa which are all below 40kg and China which is less than 80kg. Besides plastic, petroleum is still an essential ingredient to the industrial economy – large-scale transportation modes (e.g., ships, rail, planes), steel mills, refineries, and petrochemical facilities are all powered by petroleum while alternative fuels have suboptimal and counterproductive energy density, distribution and availability, and reliability characteristics. “Improving living standards” is something to strive for but the term can be a vague target: more granularly, the benchmarks include sanitation, medical supplies, food security and safety, and commerce – all of which require petroleum to improve and make available.

Despite the growing necessity of plastics, solutions are needed for waste and disposal. Plastics in oceans, rivers, and landfills are certainly a major problem today and left unabated, the environmental harm will offset gains in living standards. Founded last year, The Alliance to End Plastic Waste (AEPW) is a non-profit consisting of 50 companies across the supply chain focused on finding sustainable solutions. Although alternative materials are being sought, the focus today from consumer companies and the industry is on recycling. Two key focus areas are (i) making goods and packaging more recyclable and (ii) increasing the recycled content in products and packaging. Anecdotally in the US, we see an increasing amount of consumer goods and e-commerce packaging made from recycled content, and we expect this trend to grow quickly. Potential innovations such as chemical recycling – taking mixed plastics and converting them back to their original materials – would provide another solution alongside mechanical recycling, which exists today but faces sorting bottlenecks. Ultimately, the industry is incentivized to find solutions, and we expect sustained investment in recycling infrastructure and sustainable packaging in the near and long term.

A common concern from investors in the oil and gas sector is about the uncertain secular trends facing the industry. In our view, these uncertainties are driven by headlines and rhetoric. Consider, (i) the large and globally expanding non-transportation derived demand for hydrocarbons discussed here, (ii) the impediments and realities to rapid power generation conversion (to be discussed in a later blog), and (iii) the very slow and only partial transportation-fuel transition (see our blog Will electric vehicles muffle future oil demand?) mean global demand for hydrocarbons is unlikely to significantly deteriorate for the foreseeable future.

As the broader stock market looks past the near-term COVID-19 uncertainty and reaches new all-time highs, midstream equities are priced as if today’s uncertainty is the new normal. As discussed in this blog, US petroleum production is a vital component in today’s global economy and necessary in maintaining and improving global living standards, and although much uncertainty exists over the next year, we firmly believe that these truths remain constructive for the US midstream space over the long-term.

5. A 16-ounce bottle made of glass would weigh approximately 50 times more than one made of plastic

Businesses in the energy sector may be adversely affected by foreign, federal or state regulations governing energy production, distribution and sale as well as supply-and-demand for energy resources. Short-term volatility in energy prices may cause share price fluctuations.

The mention of specific companies does not constitute a recommendation by Invesco Distributors, Inc. Certain Invesco funds may hold the securities of the companies mentioned. A list of the top 10 holdings of each fund can be found by visiting invesco.com.

Forward-looking statements are not guarantees of future results. They involve risks, uncertainties and assumptions; there can be no assurance that actual results will not differ materially from expectations.

The opinions expressed are those of Invesco SteelPath, are based on current market conditions and are subject to change without notice. These opinions may differ from those of other Invesco investment professionals.