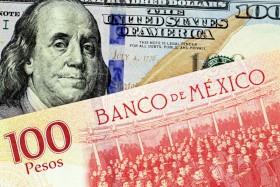 The Mexican peso is struggling to find support against several major currency rivals after the central bank cut interest rates for the 11th consecutive month. The Mexican economy has been slumping as the country fails to contain the coronavirus pandemic, with the number of new infections rising thousands per day. Despite the peso making gains this past summer, it has been one of the worst-performing Latin American currencies this year.

On Thursday, the central bank slashed its benchmark rate by 25 basis points to 4.25% during the September policy meeting. Policymakers have been easing monetary policy every month since August 2019, bringing borrowing costs to their lowest levels since August 2016.

The central bank alluded to uncertainty and downside risks in the broader economy, noting that there is very little room for maneuvering. Leaders were, however, pleased by improving data in June and July.

Taking into account the referred risks for inflation, economic activity and financial markets, major challenges arise for monetary policy and for the economy in general.

Mexico fell into a recession last year, and analysts forecast the gross domestic product (GDP) will crash by up to 10.5% this year.

On the data front, economic activity advanced 5.7% in July, coming in better than the median estimate of 5.2%. This is down from the 8.8% jump in June. Economic activity has plunged 9.8% year-over-year.

Earlier this week, it was reported that retail sales rose 5.5% in July, slightly worse than the market forecast of 5.7%. This is down from the 7.8% boost in the previous month. Retail sales have also plummeted at an annualized rate of 12.5%.