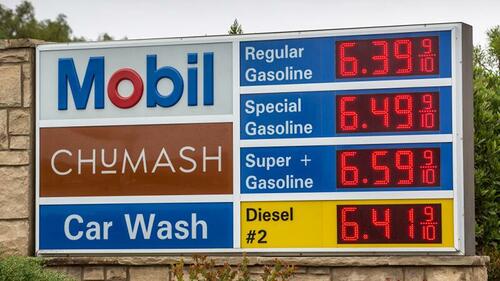 Watch: White House Tells Americans They Have It Better Than Europeans On Gas Prices

Responding to questions about record high gas prices Monday, White House press secretary Karine Jean-Pierre completely copped out by saying that Americans aren’t as bad off as people in Europe where prices are higher.

Once again falling back on the totally debunked notion that Russia’s actions are purely to blame for high energy prices, Jean-Pierre said “This is a global challenge, this is something that everyone is feeling across the globe.”

She then noted that gas prices in the European Union are over $8 a gallon.

She further claimed that “everything is on the table” to deal with record high gas prices but added “I don’t have anything to preview,” when asked for details.

Instead she claimed that Joe Biden has ensured that America is “in the place where we look at today in a much stronger economic situation where we can actually deal with inflation head-on.”

As we noted yesterday, gas prices in the U.S soared to a new record high for the ninth consecutive day. The average price of a gallon of gas has now surpassed $5 in nine states.

As the #BidenGasHike wears on, Americans are facing record-high prices across the country — with prices jumping 25 cents in just one week.

“It’s not just high, it’s SO much higher.” pic.twitter.com/XHcTWB1I0n

Meanwhile, Joe Biden is claiming that he has “produced the strongest, fastest, most wide-spread economic recovery America has ever experienced.”