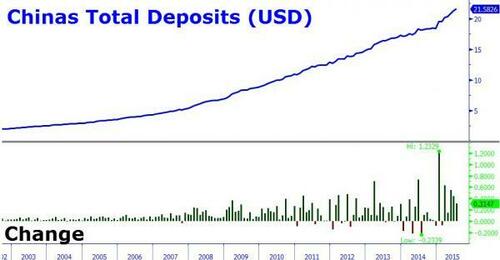 Wealthy Chinese Activate Financial “Escape Plans” Terrified Of Xi’s Coming Reign Of Terror, And Why This Is Good News For Bitcoin

Back in September 2015, more than seven years ago, when bitcoin was trading around $225, and just after China had stunned markets with its (relatively modest) yuan devaluation, we made a modest prediction:

In summary: while China is doing everything in its power to not give the impression that it is panicking, the truth is that it is one viral capital outflow report away from an outright scramble to enforce the most draconian capital controls in its history, which – as every Cypriot and Greek knows by now – is a self-defeating exercise and assures an ever accelerating decline in the currency, which authorities are trying to both keep stable while also devaluing at a pace of their choosing. Said pace never quite works out.

So what happens then: well, China’s propensity for gold is well-known. We would not be surprised to see a surge of gold imports into China, only instead of going to the traditional Commodity Financing Deals we have written extensively about before, where gold is merely a commodity used to fund domestic carry trades, it ends up in domestic households. However, while gold has historically been the best store of value in history and has outlasted every currency known to man, it is problematic when it comes to transferring funds in and out of a nation – it tends to show up quite distinctly on X-rays.

Which is why we would not be surprised to see another push higher in the value of bitcoin: it was earlier this summer when the digital currency, which can bypass capital controls and national borders with the click of a button, surged on Grexit concerns and fears a Drachma return would crush the savings of an entire nation. Since then, BTC has dropped, however if a few hundred million Chinese decide that the time has come to use bitcoin as the capital controls bypassing currency of choice, and decide to invest even a tiny fraction of the $22 trillion in Chinese deposits…

… in bitcoin (whose total market cap at last check was just over $3 billion), sit back and watch as we witness the second coming of the bitcoin bubble, one which could make the previous all time highs in the digital currency, seems like a low print as bitcoin soars past $500, past $1,000 and rises as high as $10,000 or more.

Well, we got the direction spot on, but not even we could anticipate just how much “or more” bitcoin would soar to some 6 years later when it nearly topped $70,000.

Of course, far be it for us to claim that Chinese capital outflows were the only driver behind the exponential rise in bitcoin, but they certainly were one of the earliest catalysts behind what would be a truly fantastic, generational wealth-creating meltup, and certainly explains Beijing’s relentless crusade to crush bitcoin (and crypto in general), and to launch its own laughable attempt at a CBDC, which not unexpectedly has been a completely disaster.

Why do we bring this up? For three reasons:

First, as we noted yesterday, China is aggressively engaged in stealth devaluation, and while it pretends to be trying to contain the yuan from collapsing, the plunge in the currency has been historic. Even CFR analyst Brad Setser admitted today that “until China proves otherwise, it is effectively engaged in a controlled depreciation” but so far nobody in the US pretends to notice.

Second, back in 2015 total Chinese bank deposits were $22 trillion. Fast forward to today when they are two and a half times larger at $55 trillion, or more than double their US equivalent! That’s a lot of domestic deposits that will need to be quietly ferried offshore once China admits it is aggressively pursuing yuan devaluation (which it is doing right now).

Third, back in September 2015, millions of Chinese rushed to park their savings offshore, terrified that Beijing’s ongoing devaluation wave would wipe out the value of their financial assets. Well, it’s time for another offshore funding scramble because as the FT writes, today, “thousands of wealthy people across China are headed for the exits as President Xi Jinping secures a third term, making him and the ruling Chinese Communist party even stronger than before.”

Recall that just hours after Xi not only was declared dictator for life but unceremoniously and in full view of the entire world had his centrist, globalist and pro-reform predecessor Hu Zintao escorted out of the building, guaranteeing that the rest of his rule will be a radical departure from heretofore accepted norms, and calling for the “great rejuvenation of the Chinese nation” based on revitalizing the CCP’s role as the economic, social, and cultural leader, Chinese stocks cratered to multi-decade lows and the yuan plunged to a record low as the growing realization of the horror that is coming swept across the land.

As a result, China’s wealthiest were met with market turmoil on Monday when Chinese stocks crashed the most since 2008. According to Bloomberg’s billionaire list, the 13 richest Chinese lost $12.7 billion in just one day after mounting fears about Xi’s consolidation of power. But of course, it wasn’t just them looking terrified at the glowing green color on their screens (as a reminder, in China stock colors are inverted as red means up and green means down): it was everyone.

In any case, as hundreds of millions of Chinese savers now scramble to move as much of their assets as far away off shore from the lunatic fringe in Beijing as possible, we have been flooded with reports that wealthy families across Hong Kong and China are at a “tipping point” about triggering so-called financial “fire escape plans” to avoid the wrath of Xi and CCP, according to David Lesperance, a Europe-based lawyer who works with elite Chinese businessmen and who spoke with Financial Times.

“Now that ‘the chairman’ is firmly in place . . . I have already received three ‘proceed’ instructions from various ultra-high net worth Chinese business families to execute their fire escape plans,” Lesperance said.

Ahead of the run-up to the 20th Party Congress, there was much concern that if Xi cemented his third term, there would be no pivot to his controversial policies, including the Covid-zero strategy and increased regulatory measures on companies, which have devastated parts of the economy. The actual outcome – in which Xi crowned himself undisputed ruler and surrounded himself with fawning sycophants while threatening a full-blown putch of the upper class – was far worse.

Kia Meng Loh, a senior partner at Dentons Rodyk bank in Singapore which in the past two decades has emerged as the world’s “Swiss bank account”, or the only place in the world where accounts remain truly anonymous, said that some Chinese elites have been inquiring about setting up “family offices” even before last weekend, as a way to protect wealth from the CCP:

“The clients I work with saw [Xi’s] third term as a foregone conclusion much earlier than this week,” Loh said, adding many of these families who generally shield wealth in Hong Kong found it less attractive since Beijing now has authority over the territory.

Sure enough, new data from Citi Private Bank shows the number of family offices in Singapore soared 5x between 2017 and 2019 and nearly doubled from 400 at the end of 2020 to more than 700 a year later as wealthy Chinese rushed to park their wealth offshore.

Ryan Lin, director of Bayfront Law, also located in Singapore, said he was contacted by five wealthy Chinese families last week to establish a Singapore family office, and of those, three are quickly moving forward. Lin has helped establish 30 ultra-wealthy family offices in Singapore in the past year, as many of these families hope not just to relocate their money but also family.

Lesperance admitted that many of his clients had spent years preparing to exit China, legally moving money to safe offshore places that CCP cannot touch. Some of these families are even applying for citizenship abroad.

Xi is expected to unleash a broad range of wealth taxes (under the populist campaign “common prosperity”) that has spooked the wealthy. But hiding wealth could be the least of their worries considering there have been numerous accounts of some billionaires forced into hiding, such as Alibaba’s Jack Ma. Ongoing chaotic lockdowns under the Covid-Zero policy and common prosperity as Xi secured a third term push high-net-worth residents to the exits.

The obvious question then is how long until China battens down the hatches and makes money transfers to Singapore impossible.

“The family motto has always been: ‘Keep a fast junk in the harbour with gold bars and a second set of papers’. The modern equivalent would be a private jet, a couple of passports and foreign bank accounts,” Lesperance said. “That is the world we are in . . . it is tough stuff.”

Of course, to fund said foreign bank accounts, one needs either gold bars to flee China’s infamous financial firewall… or their modern equivalent: bitcoin. And while gold shows up on X-ray, crypto does not, whether it is sent by instant transfer across the blockchain or through unobservable flash drives.

Indeed, one has to wonder if capital outflows from China are already starting to push Bitcoin higher, as fears of another round of draconian capital controls by Beijing spark outbound money flight…

… and if it was capital flight from China back in 2015 that helped propel bitcoin nearly 100x from $250 to $20,000 during the first Asia-driven bitcoin bubble of 2017/2018, one also has to wonder how high another full-blown Chinese capital flight will push the digital gold this time.