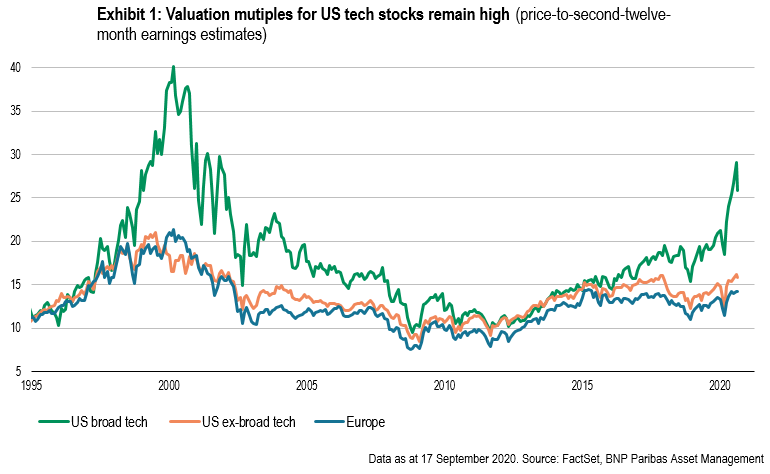 The number of new COVID-19 cases continues
to rise at an alarming pace in the UK and in Europe. The risk of renewed
lockdowns is increasing by the day and hence the need for further fiscal
support. So far, fiscal support has been waning. This backdrop is driving a
slowdown in economic activity. As such, risks of a slowing in economic growth
in the fourth quarter are rising. The key risk is that the infection rates
increase substantially as we go into the winter months.

Today, the eurozone purchasing manager
index (PMI) for September was published. This is the market’s primary source of
timely information on month-to-month changes in economic activity in the single
currency area.

The composite PMI fell by almost two
points to 50.1, effectively a rounding error above the 50 ‘no change’ level
(PMI prints below 50 imply economic contraction). For the last two months (July
and August), the composite had been clearly above 50. This followed three
months of major declines (March, April and May) and one month (June) of modest
contraction.

Today’s data suggests to us that the
economic recovery in the eurozone has stalled. The PMI survey continues to flag
disinflationary pressures in the economy, with companies increasingly reporting
the need to offer discounts to stimulate sales.

Risks around the path of activity through
the last four months of the year in the eurozone (and hence quarter-on-quarter
GDP growth in the fourth quarter) are therefore rising.

Rancour
ahead over US Supreme Court nominee

With the death, on 19 September, of Justice
Ruth Bader Ginsburg (RBG), another vacancy – the third of this presidential
term – has opened up on the Supreme Court of the United States (SCOTUS).
President Trump has said he will announce his nominee to replace RBG later this
week and Mitch McConnell, Senate majority leader, has committed to holding a
Senate confirmation vote.

The only real question is whether that
vote will be held in October, ahead of the election, or is delayed until the
‘lame-duck’ session between the election and beginning of the new Congress in
early 2021. There seems, however, little doubt that by the end of the year,
another conservative will have joined the court, creating a 6-3 conservative
majority, and that the whole process will be rancorous.

Near-term
prospects for US fiscal stimulus look much weaker

The most immediate consequence for markets
of all this is that it further reduces the probability of additional
pre-election US fiscal stimulus.

As we have previously
highlighted, since key stimulus provisions expired at the end of July,
there has been little progress in bipartisan talks to pass another bill. With
time running out before Congress breaks up for the election and against the
backdrop of what could well be a bitter fight over a SCOTUS nominee, the
prospect of harmony breaking out any time soon between Democrats and
Republicans over more government support for the economy and jobs looks pretty
dim.

Without further help, household incomes
could well come under further pressure through the autumn and into the winter,
denting prospects for consumer spending and wider economic growth.

This is a potentially critical topic
because of the apparent consensus that the Federal Reserve’s newly
announced framework for monetary policy cannot succeed without fiscal
support from the US government.

A number of senior Fed officials have
insisted on this point. Governor Lael Brainard, for example, has stressed
that “the magnitude and timing of further fiscal support is a key factor for
the (economic) outlook”. Yesterday, speaking
to the House financial services committee, Chair Jay Powell warned that the
economic recovery would suffer if lawmakers failed to pass a new stimulus
package.

Accommodative central bank policy continues
to be the key underpinning factor for global markets. It is likely that dovish
central bank policy will not only keep interest rates locked down at the
current low levels, but will also skew down interest rate volatility. In this
environment, global bond yields are
unlikely to move much. For this reason, there may be greater currency adjustments and a considerable
likelihood of increased currency volatility.

The market is steadily pricing in a US
election extension risk with November VIX
futures contracts continuing to rise relative to October contracts.
Moreover, election risk is also being priced into two months and longer options
in the key US dollar foreign exchange pairs.

The offshore Chinese yuan (CNH) continues
to strengthen versus the US dollar,
spurred by the improving economic recovery in China compared to the rest of the
world and by inflows into Chinese assets. Currently, the US-China trade
concerns are not playing much of a role in the direction of the US dollar
against the yuan. However, US election risk is driving up the volatility
premium.

In spite of the current market weakness,
risky assets should remain underpinned by low 10-year US real yields and
supportive financial conditions. The equity risk premium continues to make equities look attractive relative to
bonds. So, while there may be volatility going into the US election and
potentially somewhat beyond, corrections may provide buying opportunities.

Finally, large-cap tech stocks have recovered from their correction earlier
this month. However, it is notable that since May, second-twelve-month forward
earnings estimates have risen by less
than they have for the rest of the market. The significant gains in tech
price shares since March assumedly reflect a big rise in future earnings, but
analysts do not seem to share that view.

The lack of more positive earnings
estimate revisions explains why multiples for the sector have risen so sharply
this year and remain high even after this month’s correction (see Exhibit 1).

Investing in emerging markets, or specialised or restricted sectors is likely to be subject to a higher-than-average volatility due to a high degree of concentration, greater uncertainty because less information is available, there is less liquidity or due to greater sensitivity to changes in market conditions (social, political and economic conditions).Some emerging markets offer less security than the majority of international developed markets. For this reason, services for portfolio transactions, liquidation and conservation on behalf of funds invested in emerging markets may carry greater risk.