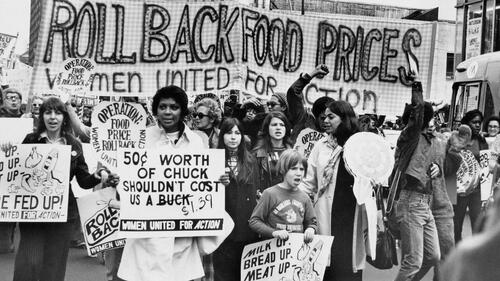 What Is Stagflation And Why Has The Establishment Been In Denial About It?

Unless you were an adult living in the US through the crisis of the 1970s into the early 1980s, you probably have no memory or experience with the concept of stagflation.  In general, most economic downturns involve deflationary pressures only, and lead to moderate recession events that cause job losses and higher poverty but nothing that has the potential to crash the entire system.   Stagflation is a different threat entirely.

There is a considerable amount of disinformation circulating these days about what stagflation is and whether or not we are in the middle of such a crisis.  Much of the disinfo has been perpetuated by the Biden White House and the mainstream media.  In short, they’ve been denying that the danger exists even though all the signs are right in front of us.  When liars get caught, they often gaslight instead of admitting defeat.

Stagflation is basically a combination of deflationary conditions in some areas of the economy coupled with price inflation in other areas, including necessities.  The mainstream narrative is that technical stagflation requires “high unemployment” along with rising prices, but this is simply not true.  At the height of stagflation crisis under President Jimmy Carter in 1980, the unemployment rate was only 7%, which is not great but also not “high” historically.  Stagflation was considered a national problem through the 1970s and yet the average unemployment rate during that decade was 5.4%.

Signs of stagflation include:  Falling or stagnant GDP, falling retail sales, falling PMI (manufacturing and services), falling or stagnant wages, declining stock markets, etc.  When these circumstances are coupled to the loss of buying power in a currency and rising prices in most goods and utilities, then you have stagflation.

This kind of instability is perhaps the worst of all worlds because prices continue to increase even though demand is falling.  It signals a severe problem with a nation’s currency system, or a collapsing supply chain or both.  The root systems of the entire economy are rotten, this is the only way that stagflation can happen.

The initial trigger for the stagflationary conditions of the 1970s was the removal of the US dollar from the last vestiges of the gold standard under Nixon (at the behest of global central bankers).  The US eventually escaped the crisis by exporting inflation overseas as the dollar’s share of global trade increased as the world reserve currency.  Federal Reserve Chairman Paul Volcker also jacked up interest rates to around 20%, which did ultimately lead to an unemployment rate of 11% in the 1980s and dragged prices down enough to stop the bubble.

Will this happen again?  It’s hard to say, but current dynamics suggest that prices will not stop rising for many months to come, and GDP, retail, PMI, wages, and other areas of the economy are now in decline.  We are, in fact, in the middle of a stagflation event.  Unfortunately we cannot export our inflation anymore because US dollar usage overseas is in decline.  This means more dollars in circulation within the US, and that means continued price spikes.

The corporate media has made a concerted effort to downplay the notion of stagflation in the public sphere until recently.  This is most likely because of the panic that would take place should people actually be made aware of the gravity of the threat.  There is also the theory that certain groups of people (Great Reset globalists) would benefit greatly from economic turmoil, and the less the public is made aware of the danger the more unprepared they will be for the crisis.  The more unprepared people are, the easier they are to control through fear and through government handouts.

Solutions to stagflation vary according to specific circumstances, but since the most viable cause would be instability in the currency, that means the currency system as a whole needs to be addressed.  Supply chain issues can be dealt with over time by increasing PRIVATE manufacturing and production within a country (not government nationalization of manufacturing or price controls).  If people start making some of their own goods at home while localizing production for necessities like food and energy, then prices will inevitably come down.  However, currency devaluation requires a wider solution.

Local communities and states could create their own currency scrip to help offset dollar devaluation.  States could create their own banking institutions, much like North Dakota has done, to help fund local industry and alleviate credit pressures.  At the national level, the dollar could be coupled to some form of commodity standard such as a gold standard and this would have immediate effects on inflation, slowing it down or stopping it completely.  Finally, there could be a moratorium on government deficit spending.  This would mean shrinking the size of government substantially, but frankly that could only be a good thing.  And finally, ending the Federal Reserve would put an end to the stimulus and QE that created the crisis in the first place.

Obviously none of these solutions would be endorsed by the Biden Administration and they might even try to stop individual states from implementing their own fixes.  It will be up to state governments and communities to defy Biden and cure the stagflationary curse before it destroys everything.