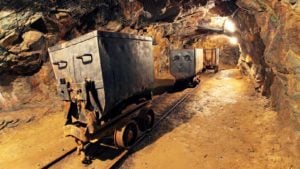 One of the biggest moves in today’s bloodbath of a market has been in Hycroft Mining (NASDAQ:HYMC), largely due to its latest earnings. At the time of writing, HYMC stock has surged 20%, while most major indices are plunging. This impressive intraday move is even more notable on days like today.

Indeed, this gold and silver miner has been in focus today. That’s not because the price of precious metals are continuing higher in this inflationary environment. Rather, it’s the high-profile investment AMC Entertainment (NYSE:AMC) made in the miner that’s raised eyebrows.

Reports today suggested that AMC gained more than $9 million as a result of Hycroft’s intra-day move. That said, AMC stock has since sunk more than 5%, moving lower alongside other meme stocks and high-growth names.

This market is nasty, and even positive news isn’t helping retail favorites today. That said, let’s dive into what’s behind today’s impressive move in Hycroft.

Why Is HYMC Stock Soaring Today?

Today, Hycroft reported interesting Q1 earnings. The company’s net loss widened from $9.7 million to $22.1 million on a year-over-year basis. This was reflected in a loss of 27 cents per share versus 16 cents per share a year earlier, largely due to the significant share increase the company saw over the past year.

AMC’s CEO Adam Aron has suggested that his company’s stake in Hycroft could be a transformational deal. The hope is that by increasing retail investor interest in Hycroft, the company could allow share sales to support operations rather than debt. In this environment of rising rates, perhaps that’s a good thing.

However, these earnings really missed the mark in my view. The company’s production numbers are very low relative to other miners out there with similar operations. Yet, this company’s market capitalization of around $325 million is much higher than it may otherwise be.

In the world of mining stocks, Hycroft is about as close to a meme stock as investors can get. For that reason, I’m gladly on the sidelines with this one, despite today’s move.

The post Why Is Hycroft Mining (HYMC) Stock Up Today? appeared first on InvestorPlace.