Can Powell achieve a soft landing? … why the answer is likely “no” … how is our homebuilding trade doing in the face of all this volatility?

The stock market is being driven by the Fed’s interest-rate policy.

Meanwhile, the Fed’s interest-rate policy is being driven by inflation.

So, there are two logical follow-up questions:

How high will the Fed have to raise rates to end inflation?

And what will that level mean for the economy and stock market?

I would say I think we have a good chance to have a soft or softish landing or outcome, if you will… but I’ll say I do expect that this will be very challenging. It’s not going to be easy.

While that was a big mouthful of mush, what Powell did say clearly is that a single hike of 0.75% isn’t on the table right now. But we should probably expect hikes of 0.50% at the next two Fed meetings.

When traders do the quick math, this means the majority of them are expecting the fed funds rate to end the year at a target rate of 2.75% – 3%. That’s according to the CME Group’s FedWatch Tool.

Tying back to our second question above, what would this level mean for the economy and stock market?

Well, the word du jour from the Fed is “neutral” – the Fed wants a neutral interest-rate level.

In other words, one that neither stimulates nor restrains economic growth. The idea is this would enable the soft landing Powell is trying to navigate.

And what are they suggesting is the level that achieves this?

So, connecting the dots, when the fed funds rate gets to 2.5%ish, we have a shot at threading the needle with a soft landing.

***But wait – wouldn’t the higher trader expectation of rates at 2.75% – 3% by year-end jeopardize the pillowy softness of Powell’s landing?

Yes, but please recall Powell’s Fred Astaire-like tap dancing and the use of the massaged word, “softish.”

In Fed-speak, just like the definition of “transitory” includes plenty of “permanence,” “softish” includes some degree of “hardish.”

Fine. But what sort of landing will we have if rates end up having to climb all the way to 3.5%? That’s what St. Louis Federal Reserve President James Bullard believes is needed.

And last Friday, we learned that former Fed President Richard Clarida is calling for this level, too.

From The Wall Street Journal:

A former senior Federal Reserve official said it was likely that the central bank would need to raise its benchmark interest rate over the next year to at least 3.5% or to even higher levels that deliberately slow economic growth to bring down inflation.

“Even under a plausible best-case scenario in which most of the inflation overshoot last year and this year turns out to have been transitory, the funds rate will, I believe, ultimately need to be raised well into restrictive territory,” said Richard Clarida, referring to the federal-funds rate, in remarks prepared for delivery Friday at a conference at Stanford University’s Hoover Institution.

Wait, what happened to “neutral?” Neither helping nor hurting the economy?

***But what if the rate required to quell inflation is much, much higher than any Fed president is calling for?

Back in February, we asked a question here in the Digest that I suspect would be ill-received by Powell and Co.

In short, using history as our guide, why shouldn’t we expect the fed funds rate to have to top the inflation rate in order to get things under control?

The basis for asking this question is the chart below.

It compares the Effective Federal Funds Effective Rate (in blue) with the Consumer Price Index (in red). Specifically, the CPI number measures the percentage change from one year earlier.

As you look at the chart, the first thing I’d ask you to notice is how the fed funds rate in blue tracks the CPI inflation rate in red pretty closely.

Now, look at the chart again.

This time, notice that when inflation spikes (again, in red), the Fed Funds rate (in blue) generally has had to climb above the CPI spike in order to rein it in.

At a minimum, it’s had to climb in the vicinity of the Fed Funds rate to be effective once inflation has moved above 5% or so.

Finally, zero in on today, at the far-right side of the chart. It’s that massive red spike of CPI.

***Now, you might be asking, where’s the related spike of blue?

Let’s zero in our timeline.

(We’ve circled it below. And if you’re having trouble seeing it, that’s pretty much the point.)

Reminder: the latest year-over-year CPI reading came in at 8.5%.

More importantly, based on the historical charts we’ve just looked at, in what world would an effective funds rate as high as 3.5% bring down 8.5% inflation?

***Is no one going to talk about this? Is it simply too terrifying for any Fed presidents to mention?

History shows that rates largely have to top inflation to rein it in.

Now, yes, the CPI should come down some on its own as higher starting comparables shrink the headline number (though this is just math – prices will still remain high).

For instance, the April CPI number is due out on Wednesday. It’s expected to show an increase of 8.1% compared to March’s 8.5%.

Regardless, through 2022, the CPI will likely remain high enough that quelling it will require rates to be raised deep into the “restrictive” category, as Clarida called it.

Perhaps we should retire “softish.”

Our advice remains the same: Follow your investment plan, follow your stop losses, keep your eyes open for amazing buying opportunities – some are here, more are coming.

***Meanwhile, let’s follow surging yields and check in on a recent homebuilding trade we highlighted

The yield on the 10-year Treasury is back above 3%.

Given the parallel relationship between the 10-year Treasury yield and mortgages, take a guess at where the 30-year fixed mortgage rate stands today.

Related to this, here in the Digest, we’ve been watching an interesting contradiction play out in the housing market.

On one hand, given historically low housing inventory and rabid demand, you would think that investors would be flooding into homebuilding stocks, expecting a tsunami of profits as homebuilders crank out new homes to satisfy demand.

But that’s not what we’ve been seeing. Homebuilding stocks have been in the toilet.

It appears Wall Street and homebuilders have been expecting demand to drop thanks to this surge in mortgage costs. This has been showing up as a decrease in builder confidence in recent months, as well as homebuilding stock prices that have imploded.

***But history has shown that eventually, all things bottom out

We’ve been watching for the bottom in homebuilding stocks because when it turns, we expect a great trade.

Our highlighted investment vehicle to monitor this situation is the iShares US Home Construction ETF, ITB. It holds homebuilding heavyweights including D.R. Horton, Lennar, Pulte, and Home Depot, among others.

Now, we actually greenlit this trade for aggressive investors back in our April 20th Digest.

After analyzing the bull and bear argument, we concluded:

If you’re an aggressive trader who doesn’t mind the possibility of being early and sitting through some sideways (or even down) action, this is a reasonable entry point.

If you’re more conservative, wait to see if ITB re-tests and holds its low from earlier this month, and then begins setting a series of “higher highs” and “higher lows” in the coming weeks.

***So, where do things stand today?

As you can see below, ITB is basically flat since that recommendation. However, over that same period, the S&P has lost 9.5%.

Frankly, this is an impressive display of strength from ITB. 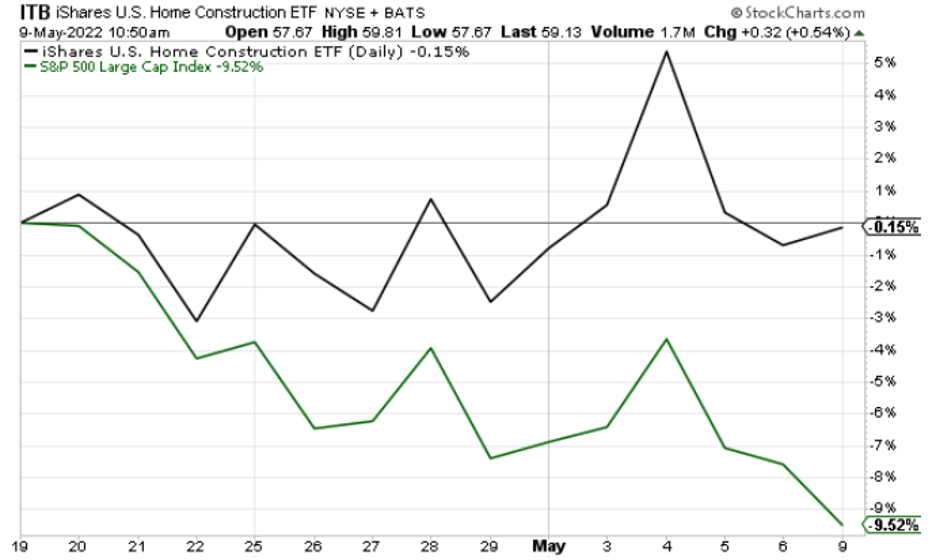 Now, let’s pull back to get a better sense for what’s happening.

Here’s ITB over the last year. You’ll see what currently looks like a bottom, then the beginning of a move north.

Notice the sawtooth series of “higher highs and higher lows” that we said to watch for back in our April 20th Digest. 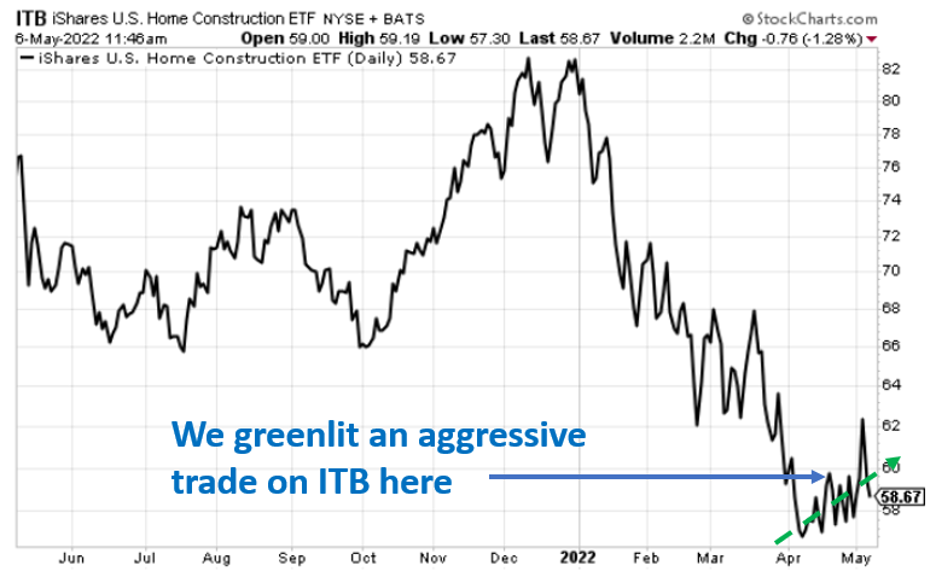 As we stand today, if you jumped into this trade, hold tight.

ITB’s strength in the face of the broad market meltdown is impressive.

If you decided to wait, continue with that cautious approach for now. You’re not missing out on any major gains yet. Plus, the fundamentals of the broad market are so atrocious that another leg lower could weigh on ITB in the short-term.

Wrapping up, we’ll keep you updated on the Fed’s tapdancing as well as the homebuilding trade in the coming weeks.

The post Why Rates Have to Go Way Higher appeared first on InvestorPlace.