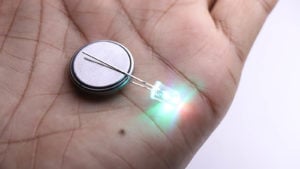 Europe could end its reliance on China for electric car batteries by 2030 but only if it keeps pace with Joe Biden’s $369bn (£298bn) green subsidy spree, experts predict.

We’re sure that’s possible. For it always is possible to make something domestically and more expensively. The question is, why would we?

Why not, umm, save the $369 billion to make our lives better in other ways and just buy the batteries from China?

We’re also told that we don’t, in fact, have to have so many of those lithium batteries:

By 2050 electric vehicles could require huge amounts of lithium for their batteries, causing damaging expansions of mining

That’s true, obviously. We’re certain that it’s not important, even as it is indeed true:

That, apparently, is the annual required amount to give the US a battery powered car fleet if current suburban lifestyles, cars people desire to drive and so on are maintained. As we pointed out a decade back the total stock of lithium available to humanity, the Li content of the lithosphere, is:

This being The Guardian of course they’ve got confused with numbers. 483m is not million, it’s mille. We can check this:

If Americans continue to depend on cars at the current rate, by 2050 the US alone would need triple the amount of lithium currently produced for the entire global market,

Using 0.000000015 percent of the total supply looks pretty feasible to us. We might have missed a zero there of course.

In order to avoid this apparently we should decide instead do this:

The largest reduction will come from changing the way we get around towns and cities – fewer cars, more walking, cycling and public transit made possible by denser cities – followed by downsizing vehicles and recycling batteries.

We should radically change our entire civilisation instead of digging a few more holes in the ground. Well, maybe we should at that, this also being something we can test. Chesterton’s Fence and all that. So, when Ford released the Model-T, the first affordable and personal transport system, what happened? The world flocked to buy them. That is, humans like suburbs, being able to get around them, that personal and autonomous mobility. Not to mention the sometimes claimed greatest effect of the automobile, upon virginity rates at marriage. Courting can be done in the back seat of the bus but it is more difficult.

Effectively the demand here is that the Model – T itself, that ability to go where and when one wished, was the mistake which must now be rectified. And we should do this because? Well, because:

To avoid lithium caused holes in the ground rising from 11 to 33 then and therefore we should redesign every American city, abandon the suburbs and cut off the working and middle classes from free mobility.

Hmm, they’ve not really made their case, have they? Or, perhaps, they’re just a bit confused?

Payal Sampat, mining program director at Earthworks, said: “The findings of this report must jumpstart policies to invest in robust, accessible public transit systems that advance equity, reduce pollution and get people where they need to go.”

Or perhaps that’s the problem. An inability to distinguish between where people need to go and how, when and where they’d like to go?