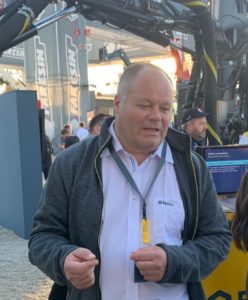 Back in July 2022, Epiroc took at big step forward in its battery electric roadmap in surface equipment when it announced it had entered an agreement with Skanska Industrial Solutions AB to trial the first ever tophammer battery-electric rig in Sweden. Trials commenced in early October 2022 and are ongoing. Another unit was then shown off at the Bauma 2022 event in Munich. IM Editorial Director Paul Moore caught up with Ulf Gyllander, Global Product Manager, Epiroc Surface division both at Bauma and in a subsequent interview, to get some more insight into the machine in terms of its development and potential for quarry operators and going forward for mine operators.

First off, why start now and why with this drill model? Gyllander told IM: “The basis has been the SmartROC T35. It’s a well-proven rig and was also a suitable size to start with. At the same time, we had requests from customers for this type of rig. The SmartROC T35 E that we now have s a result of a successful collaboration between Epiroc and our customers, including Skanska Industrial Solutions in Sweden who have provided us with valuable input making sure we delivered a rig with optimised performance and flexibility.”

He says the SmartROC T35 E model was the ideal size to be able to offer both a drill with both tethered electric and full battery electric operation. The machine for all intensive purposes is very much the same as the SmartROC T35 aside from the powertrain; the cab, wagon frame and track frame are very similar as are the boom, hydraulic and drill system and dust collection system. But of course, the diesel engine has been replaced with two electric motors plus the battery pack is mounted inside the machine.

It is fitted with the same type of well-proven Epiroc batteries and subcomponents as already deployed in the Epiroc underground electric solutions – Boomer rigs, Scooptram loaders and Minetruck trucks. This streamlines spare parts handling across all of its customer segments, both surface and underground.

The battery never has to be removed until it is worn out. In terms of power delivery alone, the battery or cable electric operation with electric motors is actually much more efficient than a diesel set up due to more precise control over the hydraulic system and air compressor that accounts for most of the power demand during drilling. The rig also comes with a range of smart features, options and enhanced automation solutions for high safety, reliability, and performance.

Two SmartROC T35 E units have now been built, one that is still being trialled with Skanska at a quarry near Stockholm, with the second as stated having been shown at Bauma 2022 in Munich which then came back to Epiroc for more internal testing. Gyllander comments: “The second unit incorporates some adjustments based on the trialling of the first unit taking into account customer and operator feedback as well as our own technical teams. We have regular meetings to talk about the machine progress and performance.”

While the development was driven by construction industry demand, the mining sector is following progress closely 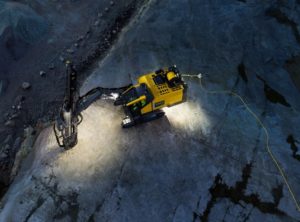 He adds: “In terms of its operation – the main 8 to 10 hour production drilling set up for these units is cable power, plus it can drill on battery only for a limited time – limited by the battery size and power capacity. Scenarios for drilling on battery alone could include a peripheral part of the quarry or mine without power infrastructure; where it isn’t possible to reach the machine with the cable or where you want to drill in a position away from the main drill pattern such as one bench up or down to deal with some large boulders or similar, but don’t want to have to set up the cabling. You can just tram on battery to that location, drill the boulders on battery power and then return to the main drill area to reattach to the grid.”

Already the machine at Skanska has been moved from one side of the quarry to the other on battery tramming, which was about 25 minutes. “Of course one day we want to be able to have an all battery drill only, but today to run a full shift like this would require a huge amount of battery power and density – battery capacity has to catch up first to allow for this. Every extra kWh we get into the battery is a step forward. It has happened in the automotive industry to some extent in terms of ever increasing range and it will happen in mining and quarrying too, especially with the pressure to deliver workable battery solutions for large mining trucks.”

Comments and feedback from mining companies so far on the machine and the concept? While this machine was clearly a result of the push in construction and quarrying for green machines, the miners of course are watching closely for the potential to move a similar setup into larger blasthole drills. This unit has a maximum hole diameter of 115 mm, or 127 mm with the SmartROC T40, which is still firmly in quarrying and smaller mines or presplit work. Noteworthy is that several of the large Epiroc mining drills up to the largest rotary Pit Viper 351 models are already available as cable electric machines – these can drill 406 mm holes.”

So what aspects of the new rig are new in terms of design and innovation? “Its certainly the customer’s ability to choose between cable electric or battery and the flexibility that it brings. If I only have the option of cable electric, then you always have to use the cable with a genset – whether to move tram it to a new quarry area, or even from the quarry to the workshop for maintenance.”

The battery is charged by the power cable – from completely empty to full charge takes about two hours. In terms of the battery capability in use – it will currently last a maximum of about one hour if just tramming and will be able to carry out about 45 minutes of drilling under battery, varying in terms of the amount of compressed air being used.

Regarding further commercialisation, in addition to the Skanska partnership, Epiroc in October 2022 signed a Letter of Intent with Rental Group – plant hire specialists covering the Nordic region – to manufacture and supply 15 brand-new battery-electric surface drill rigs. Rental Group already have an extensive fleet of heavy construction machinery, tower cranes and special equipment, including 17 Epiroc drill rigs and a recent order for an additional 13 diesel-hydraulic units.

The post Flexibility at the forefront with Epiroc electric surface drills appeared first on International Mining.