In the face of rising gas and #energy prices, nuclear energy could provide an important solution to both decarbonization and concerns about security of supply. Yet capacity is declining in the U.S. and Europe, while China has ambitious plans for nuclear expansion.

In light of escalating energy prices following Russia’s invasion of Ukraine — and the EU’s resultant pledge to reduce its reliance on Russian gas under its REPower EU plan — Europe is placing an increasing focus on security of energy supply.

In some countries, this pressure could lead to greater support for nuclear power. Indeed, earlier this year, the European Parliament approved the labeling of nuclear as green under its EU Taxonomy — highlighting its value as a zero-carbon energy source.

Conversely, China plans to ramp up its next generation over the next decade, aiming to double the share of nuclear power in its power mix to almost 10% by 2035 — even though its power demand continues to grow faster than in the U.S. and Europe. As such, over the next two decades, it is likely that the current 60/40 split of nuclear generation between developed and developing countries will reverse.

Despite its advantages as a reliable zero-carbon source of power, nuclear projects face significant headwinds in the West. In addition to social concerns over safety and nuclear waste management, building and operating a nuclear plant entails significant credit risks: Construction costs are high, and without visibility through long-term fixed-price mechanisms or regulation, new builds are exposed to increasingly volatile long-term market power prices, high construction costs and rising interest rates.

According to forecasts from S&P Global Commodity Insights, as renewables capacity expands, the low marginal production costs will likely undermine long-term power prices in Western Europe. This means that direct state involvement, or at least financial and policy support, will be a key determinant for nuclear projects, alongside whether or not investors and operators have the appetite to take on the construction risks linked to nuclear new builds.

In Europe, actions by several countries mean that, in the near term, nuclear power generation is set to decline. In France, technical issues have seen nuclear availability decrease, while Germany plans to exit nuclear by the end of this year. Belgium, too, will close all but two of its reactors in the near future, and the U.K. will close most of its existing fleet by the end of the decade.

However, after 2025, S&P Global Commodity Insights expects some stabilization of nuclear power output in Western Europe. This is in light of Belgium’s recent plans to extend the operation of two of its reactors to 2035 and France’s announcement that it will keep most of its remaining plants online over the next decade.

In addition, both France and the U.K. have announced new build projects and, in both countries, nuclear generation is receiving government support. In the U.K., the potential additional Sizewell C project should benefit from a credit-supportive regulated asset base framework with regulated revenue during construction, as well as significant risk transfer mechanisms. And, while official policy in France is yet to be confirmed, its nuclear capacity of just over 60 gigawatts (GW) is expected to remain flat through 2030. We understand that France is also planning to commission new nuclear reactors by 2035 to offset the closure of plants.

In the U.S., nuclear generation is trending down, although various states have contemplated incentives to extend the life span of nuclear plants to support the reliability of the power grid. Indeed, recent blackouts due to extreme weather have demonstrated the importance of firm power and a diverse energy mix.

In contrast, nuclear power will play a key role in China’s plans to decarbonize its economy — particularly in its coastal provinces.

Can Germany Wean Itself Off of Russian Energy?

As such, by 2035, China’s nuclear capacity is expected to reach 105 GW — surpassing both the U.S. (92 GW by 2030) and the EU (76 GW by 2030). China’s expanding fleet is driven largely by state-owned enterprises, which provide access to cheap financing, integrated supply chains and indigenous technology. As a result, the costs of new builds in China are estimated at about $2,500 per kilowatt (/kW) of installed capacity, compared to capital costs as high as $10,000/kW in other countries.

What’s more, China’s nuclear fleet is much newer than those of most developed nations, averaging just nine years, and thanks to local expertise and home-grown technology developed over the last three decades, they also have better operating efficiency. The industry is in a new development phase compared to Europe and the U.S., and stable development is likely to continue.

India and South Korea Expanding, Too

Indeed, nuclear policy has remained consistent to ensure there is sufficient remuneration of capital invested by the three state-owned nuclear power generation companies. In turn, this helps to foster new builds at a pace that can ultimately outstrip demand growth. Overall, nuclear is playing an important role in China’s energy transition as a low-cost, zero-carbon-emitting power source.

India also plans to expand its nuclear capacity, albeit from a smaller base. Facing similar challenges to its European counterparts — including technological problems, cost escalations, and huge upfront investments — nuclear power has become a less attractive option than cheaper solar and wind power. As such, in 2021, the Indian government reduced its nuclear power capacity goals to 22.5 GW by 2031 compared with an initial target of 60 GW by 2032 set 12 years before.

South Korea’s current president aims at keeping the share of nuclear at above 30% of the energy mix of the country, which is a U-turn from his predecessor. This can be achieved only by restarting construction and life extension by 2030. 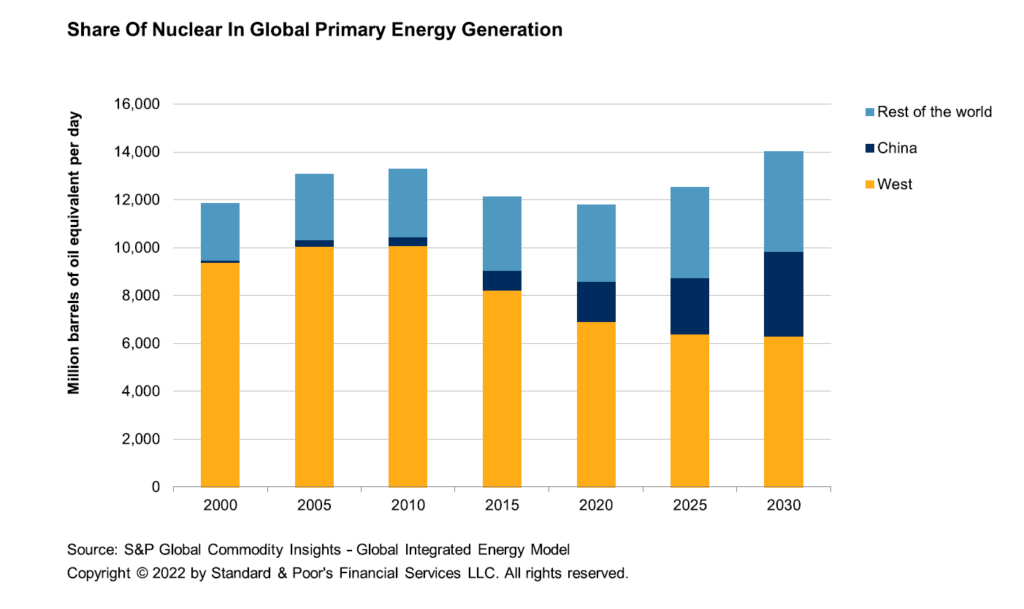 As renewable generation ramps up to represent a larger share of the global power mix, nuclear power can provide a baseload energy source to balance the intermittent capacity of renewables. Under the current crisis, it also provides significant benefits with regard to energy security. However, as plants often lack flexibility and may not consistently operate close to full nameplate capacity, nuclear energy may not be suitable as a widespread solution to bridge the energy gap.

Looking ahead, nuclear will likely continue its stable development trajectory in China given its role as an essential, low-cost solution to decarbonize the economy. In Europe, however, if further development projects are to be considered in the future, significant government support in the form of financing and a robust regulatory framework will be crucial.