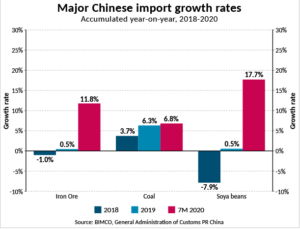 Quietly and without any fanfare China has steadily increased its buying of certain strategic commodities including cobalt, iron ore and some foodstuffs over recent weeks and months.

The industrial powerhouse has stepped up its purchases of coal, rising 6.8 per cent on year, while iron ore is 11.8 per cent higher on year, and soya bean volumes have risen 17.7 per cent.

China has taken delivery of an extra 348 Capesize cargoes of iron ore over January-July, bringing its imports for the period to 659 million tonnes, according to Hellenic Shipping News.

Australia of course ships a lot of these minerals to China and is cashing in on the boom.

Beijing is expected next month to order increased buying of some commodities to bolster its reserves ahead of its 2021-2025 five-year plan period, according to news service Bloomberg.

China has gone through periods of high demand for commodities before, but some market experts are wondering if the Asian country’s elevated demand this time is different.

As one of the largest consumers of many commodities, it makes sense for Chinese buyers to swoop in when prices are low and to stockpile purchases, said Minelife founder director and senior resources analyst Gavin Wendt.

“What I have noticed is during periods of volatility when commodity prices for iron ore and copper have market weakness, you hear news stories of China increasing its purchases of these commodities,” said Wendt.

“Iron ore and copper are key components of China’s economic growth that has been stimulated through government investment,” he said.

“China is buying iron ore because it needs it to feed its factories, and Australia is a reliable supplier,” he added.

Chinese buying can spark a sudden change in commodity price fortunes and can encourage market participation by investors effectively putting a floor under commodity prices.

“Investors and funds may say ‘look China is back in the market’ and this puts a floor under prices,” Wendt said.

Danny Huang, an analyst at S&P Global Ratings based in Hong Kong, said China’s demand for commodities had generally increased as the country recovers from the COVID-19 pandemic.

“From the latest economic data released Tuesday, China is continuing its recovery path on fixed assets investment, industrial production and consumption. This is driving demand for commodities,” he said.

“Whether the buying is over and above typical volumes for this time of the year depends on (the) commodity.

“For example, China’s crude steel production reached a record high of 95 million tonnes in August, an 8.4% increase year-over-year. That is one of the reasons upholding strong iron ore prices,” he added.

Cobalt is an in-demand metal for China

After an extended market lull, spot prices for cobalt started to rise last month reflecting stronger demand, and have hit $US33,000 per tonne, according to the London Metal Exchange website.

China’s State Reserve Bureau, which manages the country’s strategic commodities stockpiles, has told traders to buy more cobalt, a metal used in electronics, according to reports.

“Cobalt’s production largely comes out of one country, the Democratic Republic of Congo,” Wendt said.

“In the case of more strategic metals like cobalt China’s buying is two-fold. One it is taking advantage of low prices, and two it is buying the material while it can to avoid possible supply hiccups.”

It is not only cobalt, prices for other metals such as aluminium have enjoyed a good run up.

China has led a revival in aluminium prices

Aluminium is back over $US1,700/tonne for the first time since early March, said the LME.

“Looking at the year as a whole, both steel and aluminium production are clearly on track to reach record levels,” Commerzbank analyst Daniel Briesemann said in a research note.

“Despite the solid demand, we believe that China is producing in excess of demand and is stockpiling a lot of material,” he added.

What is certain is that Australia, as a producer of many sought-after commodities, is well-placed to gain from China’s stronger demand for cobalt, coal and iron ore, and grains.

The post Stealth alert: China’s back on its biggest commodity buying spree in years appeared first on Stockhead. 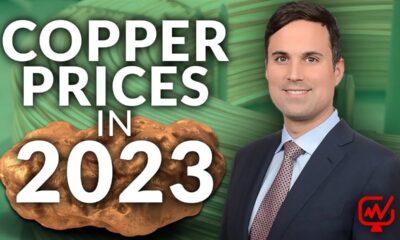