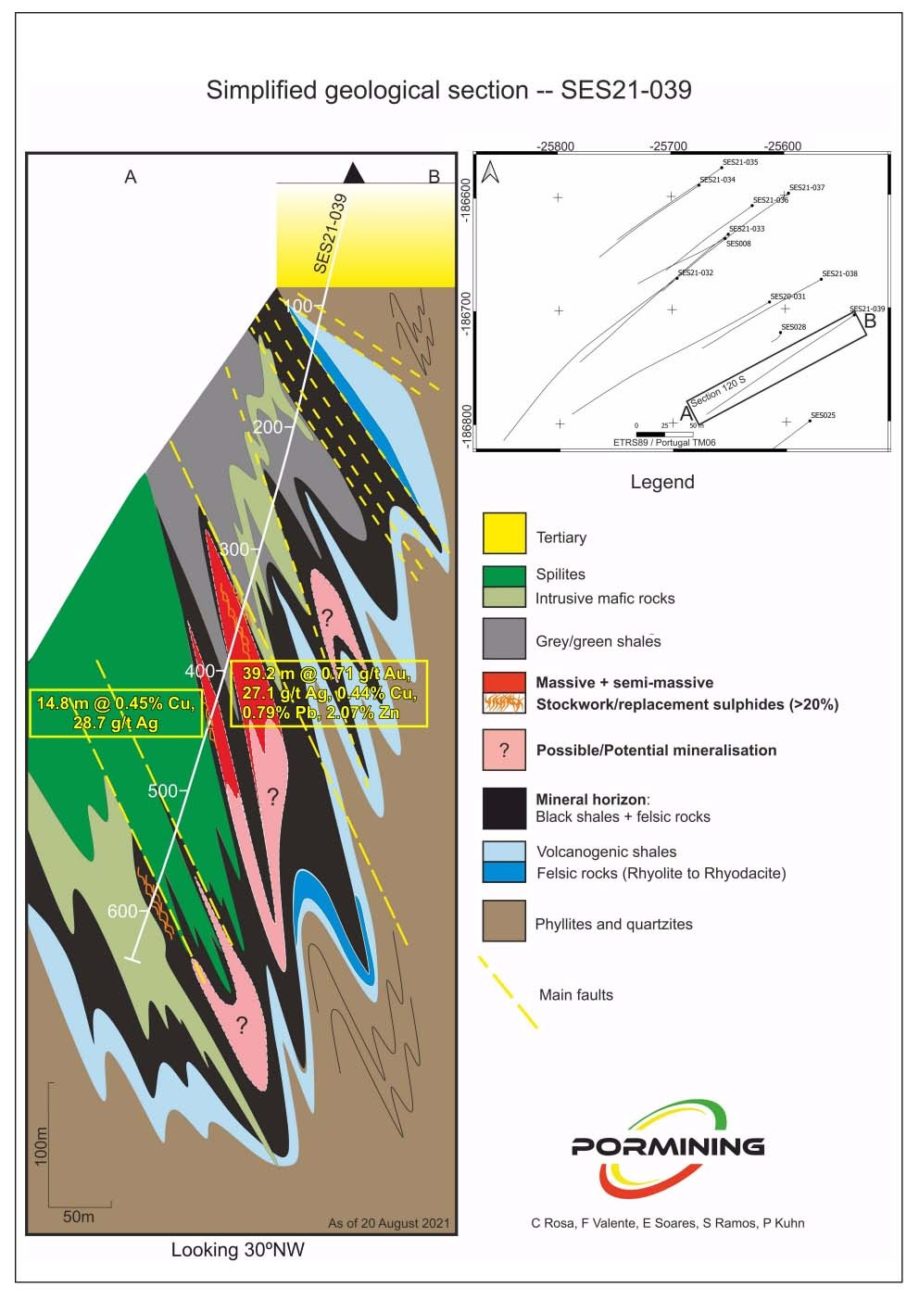 Recent drilling of Avrupa Minerals Ltd. [AVU-TSXV; AVPMF-OTC; 8AM-FSE] shows further, more definitive continuity of massive sulphide mineralization in the North sector at the Sesmarias copper-zinc prospect within the 100%-owned Alvalade project (Alentejo, Portugal). The program is a joint venture between Avrupa Minerals and Minas de Aguas Tenidas SA (Sandfire MATSA) and is operated by Avrupa through the JV entity PorMining Lda. To date, at Sesmarias North, the company has completed 17 diamond drill holes, totalling 8,900 metres, on six different fences along a strike length of 400 metres. Highlights of the SES21-046 results include: Within the main mineralized zone, higher-grade intervals between 380 metres and 390 metres stand out, including 6.95 metres at 0.91 g/t gold, including 2.95 metres at 1.16 g/t gold; 6.95 metres at 50.2 g/t silver, including 2.95 metres at 72.4 g/t silver; 8.70 metres at 0.61% copper, including 3.70 metres at 0.83% copper; 6.95 metres at 1.48% lead, including 3.95 metres at 1.87% lead; and 3 metres at 3.50% zinc, and a further 7.00 metres at 2.95% zinc.

The intercept crosses the east limb of the Sesmarias syncline, along with a number of smaller secondary folds on the east side, but misses the hinge zone and most of the west limb of the syncline (see SES21-044 results ). Results from SES21-046 demonstrate continuity of mineralization in the gap between Sections 120 S and 350 S. Drilling at Sesmarias North demonstrates robust copper-zinc massive sulphide mineralization over 400 metres of strike length, open to the north and south, and is open at depth.

Paul W. Kuhn, President and CEO of Avrupa Minerals, commented, “The new drill results continue to exhibit the strength of the Sesmarias North massive sulphide mineralization. We look forward to further drilling underneath SES21-046 and SES21-044 in this sector to increase the size of the massive sulphide body and hopefully the grade of the copper-zinc mineralization. We also expect to continue to work southwards towards the Central sector and the original discovery area. We have a further 1.1 kilometres of strike length to the south still to test, and unknown distance to the north of the initial JV drilling. We expect a busy summer drilling season at Sesmarias and other targets along the Pyrite Belt trend that we control in the Alvalade Project.”

The continuing work program is fully funded by MATSA). Sandfire MATSA can initially earn a 51% interest in the Alvalade Experimental Exploitation License property by completing funding requirements set out in the joint venture agreement between the companies. Sandfire MATSA may then elect to increase their interest in the Project to 85% by preparing a bankable feasibility study.Sandfire MATSA has advised Avrupa that drilling at Alvalade will resume in June. In the meantime, the company continues to upgrade the numerous un-drilled targets in the Alvalade Project area.

(Sandfire MATSA) is a modern mining company which owns and operates the MATSA Mining Operations in the Huelva province of Spain. With a processing plant located to the north of the Iberian Pyrite Belt that sources ore from three underground mines, Aguas Tenidas and Magdalena Mines in Almonaster la Real and the Sotiel Mine in Calanas, Sandfire MATSA produces copper, zinc and lead mineral concentrates that are sold from the port of Huelva. Sandfire MATSA also holds 1,312 km 2 of exploration permits in the south of Spain and 1,106 km2 in Portugal. Sandfire MATSA is a wholly-owned company of Sandfire Resources Ltd. [SFR-ASX].