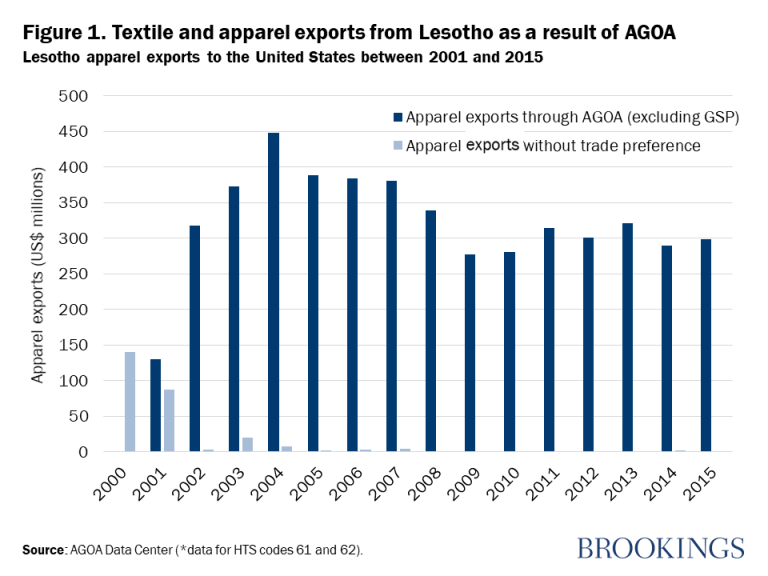 When President Bill Clinton signed the African Growth and Opportunity Act (AGOA) in 2000, African countries were given a competitive edge by providing unilateral duty-free exports for 6,500 products from Africa to the United States. Twenty years after AGOA was first adopted, we see that it has created long-term, sustainable growth by stimulating the private sector and creating jobs in a region where many countries are battling high unemployment, thereby addressing structural challenges the region faces. Additionally, in choosing a regional approach for the trade agreement, Clinton empowered both big players like South Africa and smaller players like Lesotho. In many ways, this approach aligns with the “trade not aid” mantra.

Although AGOA has been extended twice, most recently until 2025, it has come under threats over the last four years, as tariffs were imposed on key steel and aluminum products and duty-free access was suspended for apparel imports from Rwanda. Any further disruptions to AGOA could devastate the region, particularly in the medium to long term as economies seek to recover from the impact of COVID-19.

In South Africa, AGOA has contributed to substantially increasing export-led job creation in many sectors, including automobiles and agriculture ($553 million and $364 million, respectively, in 2019). AGOA has boosted South African agricultural exports such as wine and citrus, the latter of which is one of the agriculture sector’s most labor-intensive sectors. An analysis by the University of South Africa found that in 2017, the U.S. imported roughly $59 million—or 10 percent—of its wine from South Africa, which is a sizable share given global competition. A partial equilibrium simulation showed that in the short run, South Africa would lose a wine-products market of approximately $8.1 million if AGOA benefits were replaced with reciprocal tariffs through the Most Favored Nation (MFN) tariff system. This would mean a loss of 14 percent of wine export revenue, which would have a direct impact on the industry that provides 300,000 direct and indirect jobs.

But small countries have benefited immensely too. Although Lesotho’s textile and apparel industry was first established in the late 1980s, exports skyrocketed after AGOA (Figure 1). The industry grew from having a handful of factories in the 1990s to becoming the largest private-sector employer (43 percent), providing 40,000 jobs, which directly and indirectly benefit 13 percent of Lesotho’s population. Lesotho exports approximately $250 million in garments to U.S. brands such as Levi’s, Walmart, and Old Navy.

The duty-free access afforded by AGOA is important for increasing the competitiveness of the African garment industry, which isn’t covered by the Generalized System of Preferences (GSP), another preferential trade program. Some of this competitive edge was lost in 2005 when the World Trade Organization’s Multi-Fiber Agreement expired, which ended export quotas and increased competition from China and other Asian garment producers (Figure 2). Still the duty-free access has allowed sub-Saharan Africa to grow the textile and apparel sector, which is a large-scale employer of low-skilled labor.

The benefit of preferential trade agreements is that they can create sustainable structural changes. After 18 years of benefiting from AGOA, a computable general equilibrium analysis by the World Bank in 2018 showed that if AGOA was terminated, it would lead to a 1 percent loss in income by 2020 and a 16 percent decline in textile and apparel. But simulations also showed that trade facilitation measures that decrease average trade costs by 2 percent per year would eliminate the adverse income effects that result from the elimination of AGOA. The infant industry protection provided by AGOA allowed the industry to develop and flourish, such that decreasing trade costs by just 2 percent would allow Lesotho to maintain its competitiveness.

While Lesotho has benefited from AGOA for two decades, other industries and sectors are just starting to benefit. Namibia has a large livestock sector with over 7.7 million cattle, sheep, and goats. In 2019, Namibia became the first country in Africa to export beef to the United States after 15 years of working to satisfy safety regulations and logistics, and is set to export 860 tons of beef to the U.S. in 2020, rising to 5,000 tons by 2025. Exporting to the U.S. is a big market opportunity for Namibia—the U.S. is the largest consumer of red meat with Americans consuming an average of 120 kilograms of meat per person annually, according to the U.S. Department of Agriculture. Namibia’s Meatco benefited from duty-free access to the U.S. market through AGOA—given the infancy of the beef export relationship with the U.S., a disruption to AGOA could risk its sustainability and undermine capital investments within the sector.

U.S.-Africa trade relations are currently being reshaped—and if AGOA is further disrupted or replaced by bilateral free trade agreements, it could be a blow to a number of economies in the region.