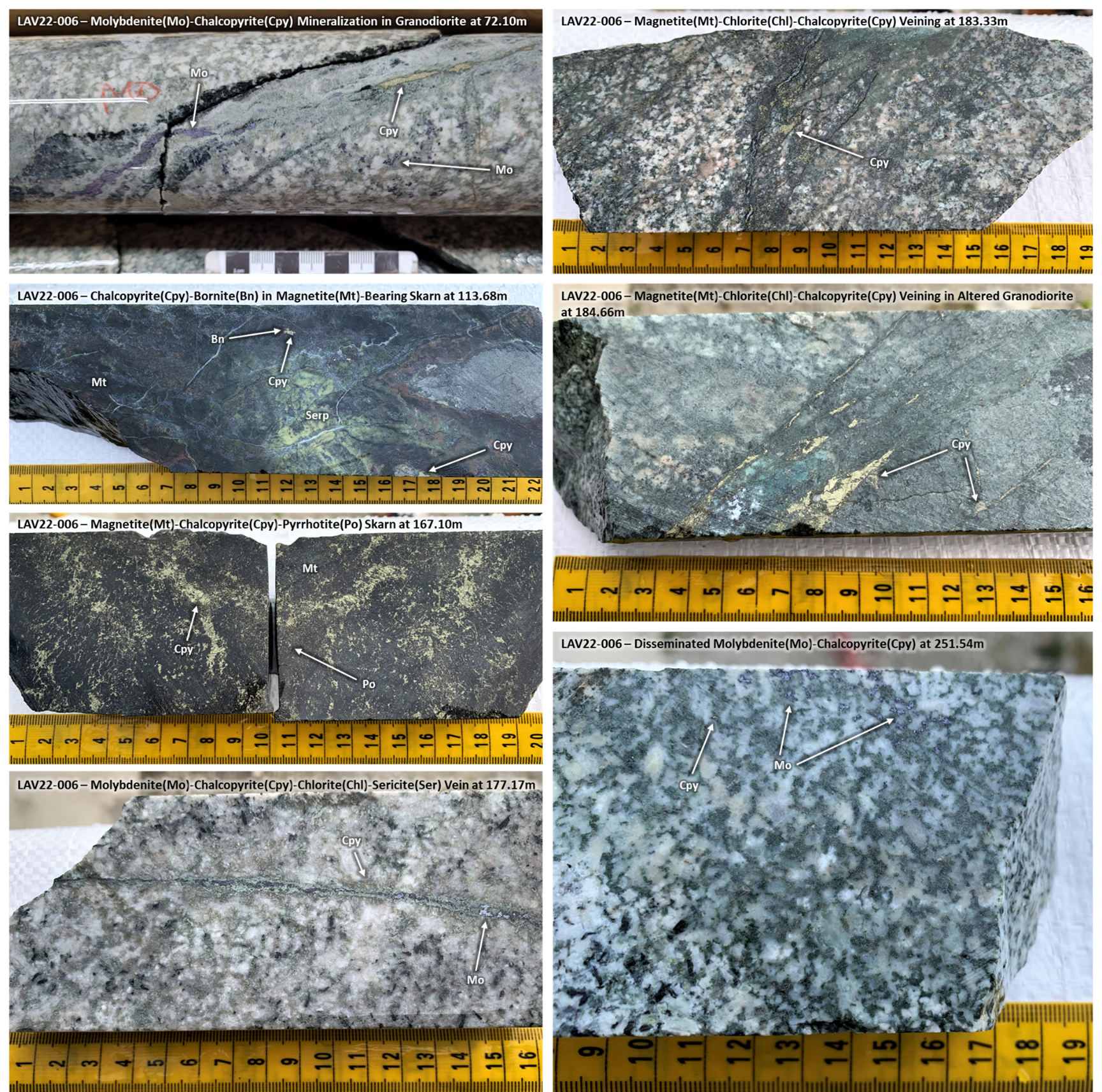 *All drill core assays are still pending and until assay results are completed and received, any inference of potential copper, gold, silver, and molybdenum grades from the geological descriptions provided in this release are speculative in nature and based on preliminary visual observations only.

Core Assets’ President & CEO Nick Rodway commented, “The 2022 Phase I diamond drilling campaign at the Laverdiere Project successfully intersected Cu and Mo skarn and porphyry-style mineralization in every drillhole. The porphyry-style mineralization and alteration we’ve seen near surface and at depth is a game changer for Laverdiere, and we look forward to planning a more aggressive Phase II deep drilling program for 2023 after receiving this year’s assay results. Drill and field crews have now mobilized to the Silver Lime Zn-Pb-Ag-Cu CRD Project.”

2022 Diamond Drilling at the Laverdiere Project

1,806 metres of exploratory HQ-sized diamond drilling has been completed at the Laverdiere Skarn-Porphyry Project in June. 2022 drilling efforts successfully confirmed and extended high-grade Fe-Cu-Au skarn, Cu-Mo endoskarn, and associated Cu-Mo porphyry style mineralization for 850 metres along the western flank of Hoboe Creek, and up to 400 metres depth, situated between the historic North and South Adits.

The Laverdiere Project is located proximal to the Llewellyn Fault Zone, coincident with Hoboe Creek in the eastern Blue Property. Laverdiere is characterized as a fine-to-coarse grained and locally massive Fe-Cu-Au-rich skarn (magnetite and/or magnetite-chalcopyrite-dominant±bornite-tetrahedrite-molybdenite-pyrite-pyrrhotite) hosted in dolomitic limestone and marble of the Devonian Boundary Ranges Metamorphic Suite. Along the western side of Hoboe Creek, dolomitic limestone is overlain by thin-bedded calcareous siltstone, quartzite, and schist – all of which are locally folded, dip moderately to the west, and are intruded by an Early Cretaceous post-accretionary granodiorite intrusion of batholith size (Coast Plutonic Complex). The granodiorite is locally foliated, Cu-Mo-bearing, and exhibits potassic alteration in the form of secondary K-feldspar and shreddy biotite after hornblende along the Fe-Cu-Au skarn contact.

The highest-grade skarn occurrences observed at Laverdiere are hosted in dolomitic limestone, near the siltstone contact and along the margins of the granodiorite intrusion. Disseminated and quartz-vein/fracture-hosted chalcopyrite, molybdenite, magnetite, and malachite have been observed in granodiorite outcropping along the Lewellyn Fault Zone (LFZ/Hoboe Creek) for up to 3.9km south from the main Fe-Cu-Au Skarn body (See News Release Dated April 6, 2022).

Nicholas Rodway, P.Geo, (Licence# 46541) (Permit to Practice# 100359) is President, CEO and Director of the Company, and qualified person as defined by National Instrument 43-101. Mr. Rodway supervised the preparation of the technical information in this news release.

Core Assets Corp. is a Canadian mineral exploration company focused on the acquisition and development of mineral projects in British Columbia, Canada. The Company currently holds 100% ownership in the Blue Property, which covers a land area of111,648.8 ha (~1,116 km²). The project lies within the Atlin Mining District, a well-known gold mining camp located in the unceded territory of the Taku River Tlingit First Nation and the Carcross/Tagish First Nation. The Blue Property hosts a major structural feature known as The Llewellyn Fault Zone (“LFZ”). This structure is approximately 140km in length and runs from the Tally-Ho Shear Zone in the Yukon, south through the Blue Property to the Alaskan Panhandle Juneau Ice Sheet in the United States. Core Assets believes that the south Atlin Lake area and the LFZ has been neglected since the last major exploration campaigns in the 1980’s. The LFZ plays an important role in mineralization of near surface metal occurrences across the Blue Property. The past 50 years have seen substantial advancements in the understanding of porphyry, skarn, and carbonate replacement type deposits both globally and in BC’s Golden Triangle. The Company has leveraged this information at the Blue Property to tailor an already proven exploration model and believes this could facilitate a major discovery. Core Assets is excited to become one of Atlin Mining District’s premier explorers where its team believes there are substantial opportunities for new discoveries and development in the area.

On Behalf of the Board of Directors
CORE ASSETS CORP.

Neither the Canadian Securities Exchange nor its Regulation Services Provider (as that term is defined in the policies of the CSE) accepts responsibility for the adequacy or accuracy of this release.

Statements in this document which are not purely historical are forward-looking statements, including any statements regarding beliefs, plans, expectations, or intentions regarding the future. Forward looking statements in this news release include expectations regarding the pending core assays, including speculative inferences about potential copper, gold, silver, and molybdenum grades based on preliminary visual observations from results of diamond drilling at Laverdiere; that preliminary results of drilling have exceeded the Company’s expectations; the Company’s plans to further investigate the geometry and extent of the porphyry-skarn continuum at Laverdiere through additional field work and diamond drilling; the proposed diamond drilling program planned for Laverdiere in June 2022; that drilling efforts will aim to confirm and extend certain targets and mineralization on the property; that the Company’s exploration model could facilitate a major discovery at the Blue Property; that the Company anticipates it can become one of the Atlin Mining District’s premier explorers and that there are substantial opportunities for new discoveries and development in this area. It is important to note that the Company’s actual business outcomes and exploration results could differ materially from those in such forward-looking statements. Risks and uncertainties include that expectations regarding pending core assays based on preliminary visual observations from diamond drilling results at Laverdiere may be found to be inaccurate; that results may indicate Laverdiere does not warrant further exploration efforts; that the Company may be unable to implement its plans to further explore Laverdiere and, in particular, that the proposed diamond drilling program planned for Laverdiere may not proceed as anticipated or at all; that drilling efforts may not confirm and extend any targets or mineralization on the Laverdiere; that the Company’s exploration model may fail to facilitate any commercial discovery of minerals at the Blue Property; that the Company may not become one of Atlin Mining District’s premier explorers or that the area may be found to lack opportunities for new discoveries and development, as anticipated; that further permits may not be granted in a timely manner, or at all; that the mineral claims may prove to be unworthy of further expenditure; there may not be an economic mineral resource; that certain exploration methods, including the Company’s proposed exploration model for the Blue Property, may be ineffective or inadequate in the circumstances; that economic, competitive, governmental, geopolitical, environmental and technological factors may affect the Company’s operations, markets, products and prices; our specific plans and timing drilling, field work and other plans may change; we may not have access to or be able to develop any minerals because of cost factors, type of terrain, or availability of equipment and technology; and we may also not raise sufficient funds to carry out or complete our plans. Additional risk factors are discussed in the section entitled “Risk Factors” in the Company’s Management Discussion and Analysis for its recently completed fiscal period, which is available under the Company’s SEDAR profile at www.sedar.com. Except as required by law, the Company will not update or revise these forward-looking statements after the date of this document or to revise them to reflect the occurrence of future unanticipated events.