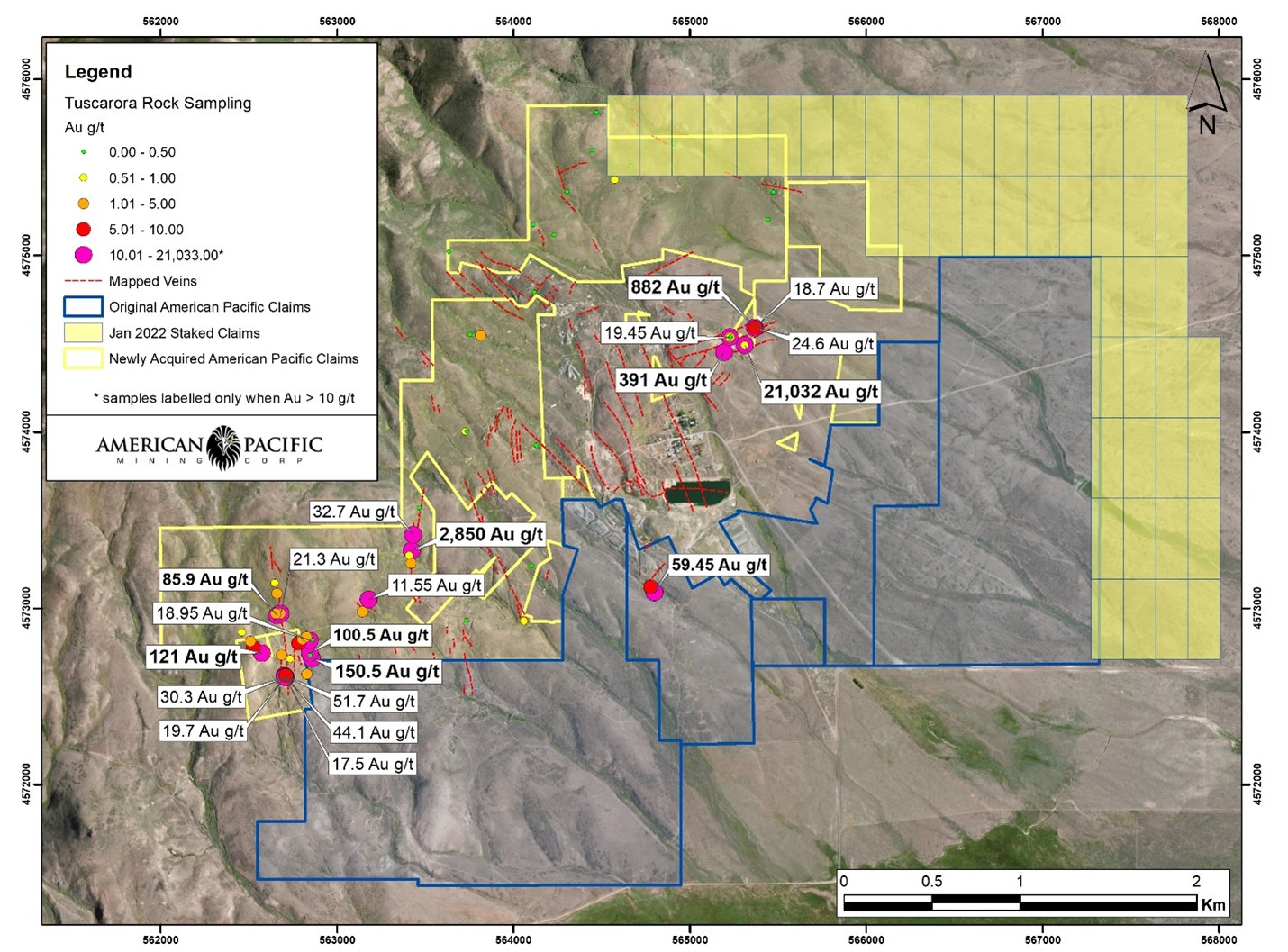 VANCOUVER, British Columbia, May 09, 2022 (GLOBE NEWSWIRE) — American Pacific Mining Corp (CSE: USGD / OTCQX: USGDF / FWB: 1QC) (“American Pacific” or the “Company”) is pleased to provide an update for its Tuscarora Gold Project in Nevada (the “Project”), including drill program progress and the expansion of the land package through the staking of additional claims.

The Company has now completed 13 holes of a planned 17,000 metre (up to 70 hole) drill program at the Project. Initial assays are pending with results expected in the coming weeks.

Drilling to date has focused on the south and central area of the Modoc Target, where high-grade rock chip and grab samples, up to 2,850 grams per tonne (“g/t”) gold (“Au”) and 1,460 g/t silver (“Ag”), were reported by the Company in 2021. This is the first time the area encompassing Modoc, which American Pacific acquired in 2021, has ever been drilled (see September 15, 2021 news release)

The Company has also recently staked an additional 53 claims for 1,095 acres just north of the Modoc veins, which project onto Bureau of Land Management (“BLM”) ground. Tuscarora is now a 268 claim, 5,370-acre project.

“Drilling continues along the Modoc vein set on the western portion of our property. Last week we acted swiftly and staked an additional 53 claims north of the current Modoc drilling after observing evidence that the Modoc structure continued north of our previous property boundary. Our plans have been modified to drill in this area as we move north along the Modoc veins acquired last year. Modoc is one of several priority targets at Tuscarora and drilling will shift to the silver/gold veins associated with the Grand Prize area in the coming weeks, stated Eric Saderholm, the Company’s President.

The Company has observed visible gold both in reverse circulation drill cuttings and in detailed sluice box sampling in several holes and noticed some discrepancies in reproducibility in assays. It appears that some of the coarse gold and silver, which are common in the Tuscarora District, may have been missed during the traditional assaying processes. The procedures in most assay labs are geared toward defining finer grained or microscopic gold and generally perform adequately for deposits containing gold found in the finer fractions. American Pacific, in conjunction with our Reno based lab, has initiated new sampling and assaying procedures, including finer grinding and specialized assaying protocols that will assist in obtaining more representative values for both gold and silver. Implementing these new procedures has caused a delay in obtaining final results but the Company believes that this move is critical in providing accurate assays.

An additional 50 holes are planned for the 2022 drill program and will focus on several high-priority targets, including the Grand Prize Target, where bonanza grade surface rock samples included up to 21,032 g/t Au and 38,820 g/t Ag, which were reported by the Company in 2021 (see September 15, 2021 news release).

Technical aspects of this press release have been reviewed and approved by the designated Qualified Person (QP) under National Instrument 43-101, Eric Saderholm, P.Geo.