All monetary amounts are expressed in Canadian Dollars, unless otherwise indicated.

The Offering was conducted on a “bought deal” basis by a syndicate of underwriters led by Haywood Securities Inc. (“Haywood“), as lead underwriter and sole bookrunner, and including Canaccord Genuity Corp. and Laurentian Bank Securities Inc. (together with Haywood, the “Underwriters“). In consideration for their services, the Underwriters received a cash commission equal to 6.0% of the gross proceeds of the Offering and that number of non-transferable broker warrants equal to 6.0% of the number of Offered Securities sold in the Offering. Each broker warrant is exercisable to purchase one common share of the Company at an exercise price of $0.26 until September 29, 2024.

In addition to Alamos, certain other insiders of the Company purchased an aggregate of 38,500 Offered Shares under the Offering. Each of these transactions constitutes a “related party transaction” within the meaning of TSX Venture Exchange Policy 5.9 (“Policy 5.9“) and Multilateral Instrument 61-101 (“MI 61-101“). The Company has relied on the exemptions from the formal valuation and minority shareholder approval requirements of MI 61-101 (and Policy 5.9) contained in sections 5.5(a), 5.5(b), 5.7(1)(a), and 5.7(1)(b) of MI 61-101 in respect of such insider participation. The Company did not file a material change report more than 21 days before the expected closing of the Offering, as the details and amounts of the insider participation were not finalized until closer to the closing and the Company wished to close the transaction as soon as practicable for sound business reasons.

The Offered Securities were offered by way of a short form prospectus filed in all provinces of Canada, except Québec (the “Prospectus“). The Offered Shares were offered to U.S. buyers on a private placement basis pursuant to available exemptions from the registration requirements of the United States Securities Act of 1933, as amended (the “U.S. Securities Act“), and other jurisdictions outside of Canada provided that no prospectus filing or comparable obligation arises.

The Offering, and the listing of the Offered Securities, is subject to final acceptance by the TSX Venture Exchange

Red Pine Exploration Inc. is a gold exploration company headquartered in Toronto, Ontario, Canada. The Company’s common shares trade on the TSX Venture Exchange under the symbol “RPX”. The Wawa Gold Project is in the Michipicoten greenstone belt of Ontario, a region that has seen major investment by several producers in the last five years. Its land package hosts numerous historic gold mines and is over 6,900 hectares in size. The Company’s Chairman of the Board is Paul Martin, the former CEO of Detour Gold. The Board has extensive and diverse experience at such entities as Alamos, Barrick, Generation Mining, Detour Gold and Paramount Gold Nevada Corp. Led by Quentin Yarie, CEO, who has over 25 years of experience in mineral exploration, Red Pine is strengthening its position as a major mineral exploration and development player in the Michipicoten region.

For more information about the Company, visit www.redpineexp.com

This News Release contains forward-looking statements. In some cases, you can identify forward-looking statements by terminology such as “may”, “should”, “expects”, “plans”, “anticipates”, “believes”, “estimates”, “predicts”, “potential” or “continue” or the negative of these terms or other comparable terminology and in this news release includes statements regarding the receipt of final acceptance from the TSX Venture Exchange for the Offering, the use of proceeds of the Offering and future plans of the Company. These statements are only predictions and involve known and unknown risks, uncertainties and other factors that may cause our or our industry’s actual results, levels of activity, performance or achievements to be materially different from any future results, levels of activity, performance or achievements expressed or implied by these forward-looking statements. 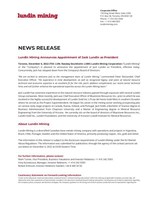