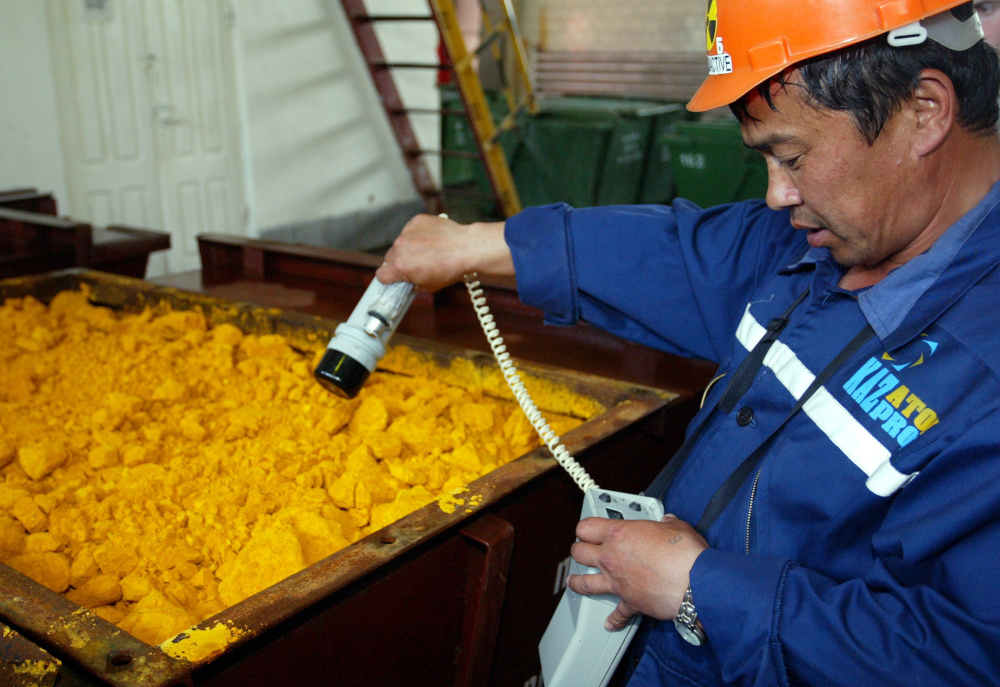 PALM BEACH, Fla., Sept. 13, 2022 /PRNewswire/ — Uranium and other reactive natural chemicals have had a bad rep in the past. This sentiment is gradually changing, as the world is shifting from fossil fuel to renewable energy resources. Uranium’s long-term outlook seems promising, but the constant disruption in the ratio of supply and demand has affected the commodity’s price. The industry giant, Cameco, has suspended multiple mining projects in the past to stabilize the price of uranium stocks. The top 10 countries that produce uranium are: Kazakhstan, Canada, Australia, Niger, Namibia, Russia, Uzbekistan, China. USA and Ukraine. An article in The Fintech Mag discussed whether 2022 is the time to buy uranium stocks. They said: “Uranium (U) is a heavy metallic element that has been used as a reliable source of concentrated energy for many years. It has a melting point of 1132°C. It is naturally found in most rocks with a concentration of 2 to 4 parts per million. Despite the high value associated with this metal, it is as abundant in Earth’s core as other common elements like tin and tungsten. Only one kilogram of uranium can generate energy that is equivalent to the production capability of about 1,500 tonnes of coal. Uranium is a mixture of two isotopes: uranium-238 (U-238) and uranium-235 (U-235). The occurrence ratio of U-238 in natural deposits is about 99% while that of U-235 is 10%.”  Active companies in the markets today include:  BASIN URANIUM CORP. (OTCPK: BURCF) (CSE: NCLR), Denison Mines Corp. (NYSE: DNN) (TSX: DML), Cameco (NYSE: CCJ) (TSX: CCO), Ur-Energy Inc. (NYSE: URG) (TSX:URE), NexGen Energy Ltd. (NYSE: NXE) (TSX: NXE).

The article continued: “One of the major factors that increase the price of uranium stocks is the increase in the demand for nuclear power as an alternative to fossil fuel. As more and more nations are shifting to greener methods for energy generation, the nuclear energy industry is gaining traction worldwide. For example, in France, there are about 56 nuclear power reactors that are currently used as primary power sources in the country.  Secondly, the cost of standard fossil fuels, such as coal and natural gas, is directly proportional to the value of uranium stocks. When the price of fossil fuels increases, then this can demand a sudden increase in the demand for greener methods for the production of electricity. Market watchers are optimistic about the prices of uranium stocks in the coming years. With the increase in awareness regarding renewable energy resources, governments are becoming more inclined to approve nuclear projects in different countries.”

BASIN URANIUM CORP. (CSE: NCLR.CN) (OTCPK: BURCF) BREAKING NEWS: BASIN URANIUM ANNOUNCES INTERSECTION OF SIGNIFICANT MINERALIZATION FROM PHASE 1 DRILLING AT MANN LAKE – BASIN URANIUM CORP. (“Basin Uranium” or the “Company”) is pleased to announce the completion of a ground based gravity survey and a heliborne Mobile MT Electromagnetic and Magnetic survey at its Mann Lake project located  25 km southwest of the McArthur River Mine and 15 km to the northeast along strike of Cameco’s Millennium uranium deposit.

The recently collected and interpreted geophysical data has generated new drill targets over prospective areas on the Mann Lake property. The Phase 2 drill program will test the potential for uranium mineralization along interpreted lineament or structural corridors at the unconformity and in the basement, that correspond with resistivity and magnetic lows and the margins of gravity lows.

“The summer geophysical programs identified a number of new prospective targets, in addition to refining the resolution and coverage over the Mann Lake claims.” commented Mike Blady, CEO of Basin Uranium. “With the additional data, our focus will be on coincident geophysical anomalies that sum together to provide the most fertile geophysical environment along with incorporating know uranium mineralization from our phase one drilling.”

Mobile MT Electromagnetic and Magnetic Survey – The Mobile MT survey successfully identified conductive zones and structures along the unconformity contact and deeper in the basement. These conductive zones are prospective for graphite and/or its breakdown products, which are considered to be responsible for uranium mineralization. In addition, deep structures within the basement allow for fluid migration, which can create pathways for the precipitation of uranium mineralization along the unconformity contact and within the basement rocks.

The purpose of the Mobile MT survey was to identify deep structures along the unconformity and in the basement, including possible alteration and mineralization zones. A total of 3 production flights were flown to complete 376 line-kilometers of the survey over a 70 sq.km area. The main conductors along the unconformity contact are shown as resistivity lows (blue) in the accompanying map. The Mobile MT apparent conductivity and magnetics data have also delineated NE and NW trending prospective structures that cross-cut the basement throughout the property.

Gravity Survey – Multiple gravity low anomalies are defined along the southern and south-eastern portions of the tenure. Gravity lows are prospective in uranium exploration, as they can correlate to a de-silicification of the rocks that may indicate the presence of a fault structures, which are prospective for graphite and/or uranium mineralization

MWH Geo-Surveys completed a 2539 station gravity survey over the southern portion of the Mann Lake tenure in July 2022. Results were merged with the historic (2006, 2008) gravity survey data, to complete the coverage over the central and southern portions of the property.  CONTINUED…  Read the BASIN URANIUM full press release by going to:  https://basinuranium.ca/news/

In other news and developments of note in the markets this week:

“Our results reflect the very deliberate execution of our strategy of full-cycle value capture. And, we are benefiting from higher average realized prices in both our uranium sales and our fuel services sales as the market continues to transition and geopolitics continue to highlight concentration of supply concerns,” said Tim Gitzel, Cameco’s president and CEO.

“In the drive for a clean energy profile, policy makers and business leaders must recognize that there is a need to balance affordability and security. Too much focus on intermittent, weather dependent, renewable energy, has left some jurisdictions struggling with power shortages and spiking energy prices, or dependence on Russian energy supplies. The good news for us is that many are turning to nuclear – which provides safe, reliable, affordable, carbon-free baseload electricity while also offering energy security and independence.

Ur-Energy Inc. (NYSEAmerican: URG) (TSX:URE) recently announced that it has signed a multi-year sales agreement with a leading U.S. nuclear utility to supply uranium produced from a project owned and operated by the Company’s U.S. subsidiaries, including Lost Creek.

Completing this supply agreement marks the first step of Ur-Energy’s strategic product marketing plan by which the Company intends to commit a portion of its future uranium production into term sales agreements with U.S. based nuclear utilities. This initial agreement calls for the annual delivery of a base amount of 200,000 pounds of uranium concentrates over a six-year period beginning in the second half of 2023. Sales prices are anticipated to be profitable on a Company-wide, all-in cost basis and are escalated annually from the initial pricing in 2023.

Camp East – uranium concentration of 0.10% U3O8 in RK-21-140 from 166 m to 167 m down hole in association with brittle structure and hydrothermal alteration.

Further, NexGen has commenced 2022 drilling focused on regional exploration targets at the 100% owned Rook I project (the “Project”); and an extensive geophysical program over high priority areas of NexGen’s mineral tenure in the southwest Athabasca Basin, Saskatchewan.

DISCLAIMER:  FN Media Group LLC (FNM), which owns and operates Financialnewsmedia.com and MarketNewsUpdates.com, is a third- party publisher and news dissemination service provider, which disseminates electronic information through multiple online media channels.  FNM is NOT affiliated in any manner with any company mentioned herein.  FNM and its affiliated companies are a news dissemination solutions provider and are NOT a registered broker/dealer/analyst/adviser, holds no investment licenses and may NOT sell, offer to sell or offer to buy any security.  FNM’s market updates, news alerts and corporate profiles are NOT a solicitation or recommendation to buy, sell or hold securities.  The material in this release is intended to be strictly informational and is NEVER to be construed or interpreted as research material.  All readers are strongly urged to perform research and due diligence on their own and consult a licensed financial professional before considering any level of investing in stocks.  All material included herein is republished content and details which were previously disseminated by the companies mentioned in this release.  FNM is not liable for any investment decisions by its readers or subscribers.  Investors are cautioned that they may lose all or a portion of their investment when investing in stocks.  For current services performed FNM was compensated twenty five hundred dollars for news coverage of current press release issued by BASIN URANIUM CORP. by a non-affiliated third party.

FNM HOLDS NO SHARES OF ANY COMPANY NAMED IN THIS RELEASE.