Quotes from the Company

“Since discovering our Khundii Minerals District, we have delineated over nine kilometres of prospective gold bearing structures connecting our Bayan Khundii, Ulaan and Dark Horse deposits,” continued Mr. Akerley. “Plans are being finalized for the next phase of drilling along this trend and throughout the broader Khundii-Ulaan alteration system.”

The Q3 2022 Dark Horse drill program, completed in September 2022, was designed to confirm and expand gold mineralization in this prospect, located approximately two kilometres north of Erdene’s shovel-ready Bayan Khundii Gold Project. The 20-square-kilometre Dark Horse prospect comprises the northern portion of the Company’s Khundii mining and Ulaan exploration licenses. Drilling to date at Dark Horse has focused on the Dark Horse Mane (“DHM”) prospect, a 1.5-kilometre, north-south oriented, mineralized trend discovered in early 2021, that remains open along strike to the north and south and at depth. Along this trend, Erdene has delineated southern and northern zones, referred to as Dark Horse Mane South and Dark Horse Mane North, respectively, and recently identified the East Mane prospect that was drill tested in Q3 2022.

The recently completed drilling program consisted of 29 holes (including one hole extension) totaling 2,417 metres. Exploration was focused on Dark Horse Mane South, Dark Horse Mane North as well as targets adjacent to the Dark Horse Mane mineralized trend identified through the reverse circulation (“RC”) drill program completed in mid-2022, geophysics and surfacing sampling. Highlights from the Q3 2022 Dark Horse drill program are provided below in Table 1. A drill hole plan map, section, and comprehensive table of results are attached to this release.

Drilling at Dark Horse Mane South was comprised of seven holes totaling 543 metres, including five near surface, large diameter (PQ), diamond drill holes, totaling 82 metres (AAD-214 to AAD-218). The PQ holes were drilled to confirm continuity of grade and geometry of shallow, very high-grade mineralization and to collect material for process test work. Multiple zones of high-grade mineralization were intersected within 15 metres of surface, with several one-metre intervals returning grades exceeding 10 g/t gold, including a one-metre interval grading 88.5 g/t gold (AAD-218; 6 to 7 metres), interpreted as supergene enrichment. Two holes at DHM South, AAD-191 and AAD-192, were designed to test extension of mineralization at depth. These holes, collared in the northern and southern portions of DHM South, respectively, successfully expanded the area of alteration and mineralization at depth, returning up to 1.82 g/t gold over two metres (AAD-191), as well as strongly anomalous indicator element mineralization (As and Sb).

A further nine holes, totaling 861 metres were drilled to test high priority targets within a 700 metre by 1 kilometre area east of the Dark Horse Mane target, identified through the recently completed RC drill program, geochemical surveys and geophysical anomaly interpretation. Most importantly, in a new area, now referred to as the East Mane Target, hole AAD-193, located 480 metres east of DHM, returned 3 metres of 2.13 g/t gold within a thick unit of intensely white mica altered andesite porphyry. This hole is located at a NS and NE structural intersection and within an area of magnetic low / chargeability high, very similar to the geological environment of DHM South. Additionally, holes AAD-212 and AAD-213 followed up on AAD-193, and returned anomalous gold and strongly anomalous indicator element mineralization (As and Sb), suggesting close proximity to potential gold mineralization. Several of the other holes drilled in the area returned elevated gold and indicator elements (As and Sb). Taken together, the results show mineralizing fluids were present throughout the target area, confirming East Mane as an exciting new prospect. Follow-up exploration is warranted and will be undertaken in the coming months.

In addition to the exploration at Dark Horse, Erdene drilled three step-out holes on the western and northern periphery of the main mineralized zone at Ulaan Southeast, expanding mineralization at this recent discovery. Highlights from these holes are included below:

Erdene’s deposits are in the Trans Altai Terrane, within the Central Asian Orogenic Belt, host to some of the world’s largest gold and copper-gold deposits. The Company has been the leader in exploration in southwest Mongolia over the past decade and is responsible for the discovery of the Khundii Minerals District comprised of multiple high-grade gold and base metal prospects, one of which is currently being developed, the 100%-owned Bayan Khundii Gold Project, and another which is being considered for development, the 100%-owned Altan Nar Project. The Khundii Minerals District is currently defined based on three gold and base metal systems related to shallow subduction Paleozoic intrusive events within a 40-kilometre by 20-kilometre area in the Trans Altai Terrane (formerly known as the Erden Terrane). Recent exploration program focused on the two gold-dominant systems:

An overview of the recent Dark Horse Mane and Ulaan discoveries in the Khundii Minerals District are included below.

Dark Horse Mane is a 1.5-kilometre trend of alteration and gold mineralization discovered in 2021. Located 2.4 kilometres north of the BK deposit, this zone begins at surface, hosting supergene enriched gold zones including an exceptionally high-grade gold bearing zone in the southern portion with values up to 195 g/t gold over 1 metre (AAD-178) and ranging in thickness from 20 to 60 metres vertical depth with locally deeper oxidation along fractures. The high-grade oxide body exhibits strong continuity along a north-south strike. Mineralization remains open along strike and at depth. Limited deeper drilling has intersected wide zones of gold mineralization (e.g., AAD-57, 48 metres of 1.18 g/t gold from 194 metres down hole) associated with epithermal veins, white mica, and sulfide alteration up to 230 metres vertical depth and remaining open.

The Company conducted data compilation, interpretation and drill hole targeting for the broader Dark Horse prospect area in late 2021 and early 2022. This work focused on gold anomalism, identifying feeder structures, shallow oxide gold mineralization, and areas with similar characteristics to Dark Horse Mane, as well as the potential for deeper zones of gold mineralization. This work defined numerous drill targets for testing, several of which were reported on in today’s release.

The Ulaan gold target is a blind-top discovery identified in Q3 of 2021. The discovery is characterized by hundreds of metres of gold mineralization (up to 354 metres) over an area 200 metres by 250 metres. Gold mineralization begins approximately 80 metres from surface and remains open along strike to the west/northwest and at depth. Intervals include 152 metres of 1.7 g/t gold in UDH-22 (from 85 metres) and 77 metres of 3.2 g/t gold in UDH-21 (from 115 metres). Similar to the BK gold deposit, located 300 metres to the east, the mineralizing event is characterized by exceptionally high-grade quartz ± hematite and adularia veins and stockwork zones enveloped by the same gold bearing, silicified, white mica altered lapilli tuff sequence. Stockwork zones identified in the northern portion of the Ulaan discovery were the target of the initial Q2 2022 drilling and helped to better define the orientation and extent of these exceptionally high-grade zones where intervals of 5 metres of 20 g/t gold (UDH-14) to 1 metre to 156 g/t gold (UDH-21) have been returned within broad high grade zones including 27 metres of 8.74 g/t gold (UDH-21) and 34 metres of 5.43 g/t gold (UDH-14). In addition, the 2022 exploration program included the extension of a series of existing drill holes to test for continuity at depth. Expansion drilling at Ulaan Southeast is ongoing.

The southern portion of the Ulaan license has areas of anomalous gold-in-soil over an area 3.5 kilometres by 1 kilometre. The underlying geology and alteration appear to be analogous to the gold mineralization at Ulaan Southeast and Bayan Khundii, namely tuffaceous units with white mica and silica alteration.

Erdene Resource Development Corp. is a Canada-based resource company focused on the acquisition, exploration, and development of precious and base metals in underexplored and highly prospective Mongolia. The Company has interests in three mining licenses and an exploration license in Southwest Mongolia, where exploration success has led to the discovery and definition of the Khundii Minerals District. Erdene Resource Development Corp. is listed on the Toronto and the Mongolian stock exchanges. Further information is available at www.erdene.com. Important information may be disseminated exclusively via the website; investors should consult the site to access this information.

Peter Dalton, P.Geo. (Nova Scotia), Senior Geologist for Erdene, is the Qualified Person as that term is defined in National Instrument 43-101 and has reviewed and approved the technical information contained in this news release. All samples have been assayed at SGS Laboratory in Ulaanbaatar, Mongolia. In addition to internal checks by SGS Laboratory, the Company incorporates a QA/QC sample protocol utilizing prepared standards and blanks. All samples undergo standard fire assay analysis for gold and ICP-OES (Inductively Coupled Plasma Optical Emission Spectroscopy) analysis for 33 additional elements. For samples that initially return a grade greater than 5 g/t gold, additional screen-metallic gold analysis is carried out which provides a weighted average gold grade from fire assay analysis of the entire +75 micron fraction and three 30-gram samples of the -75 micron fraction from a 500 gram sample.

Erdene’s drill core sampling protocol consisted of collection of samples over 1 or 2 metre intervals (depending on the lithology and style of mineralization) over the entire length of the drill hole, excluding minor post-mineral lithologies and un-mineralized granitoids. Sample intervals were based on meterage, not geological controls, or mineralization. All drill core was cut in half with a diamond saw, with half of the core placed in sample bags and the remaining half securely retained in core boxes at Erdene’s Bayan Khundii exploration camp. All samples were organized into batches of 30 including a commercially prepared standard, blank and either a field duplicate, consisting of two quarter-core intervals, or a laboratory duplicate. Sample batches were periodically shipped directly to SGS in Ulaanbaatar via Erdene’s logistical contractor, Monrud Co. Ltd.

Reported intervals are apparent thicknesses, i.e., downhole widths. The current Bayan Khundii drill holes (reported in this release) are all dipping from 45 to 60 degrees and oriented to intersect SW dipping WNW trending gold bearing veins. Additional study is required to confirm true widths. Reported grades for intervals are weighted averages based on length of sampling intervals. No top cut has been applied; however, all intervals greater than 10 g/t gold and 100 g/t gold are reported individually for clarity.

_______________________
1 Reported intervals in this release are downhole apparent widths. Continued exploration is required to confirm anisotropy of mineralization and true thicknesses 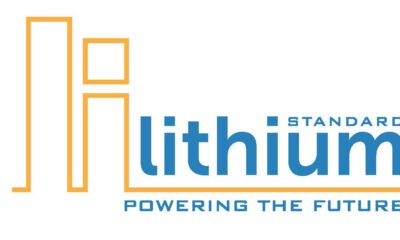 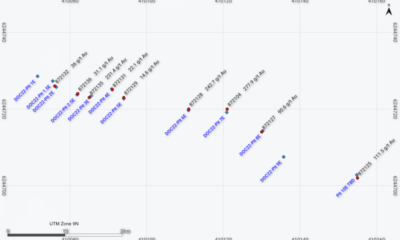