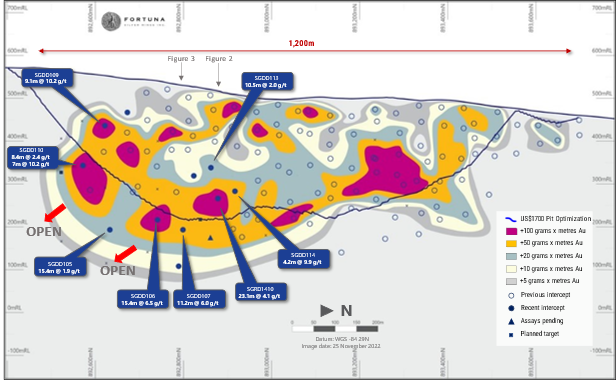 This upgraded Mineral Resource estimate incorporates an additional 41 diamond and reverse circulation drill holes totaling 14,520 meters to the maiden Inferred Mineral Resource, all of which were drilled by Fortuna during 2022. The estimation methodology was consistent with that set out in the Fortuna news release dated March 15, 2022.

Recent drilling has also shown that the two main high-grade ore shoots, which previously were modeled as separate shoots, are part of a continuous lode with a strike length of at least 700 meters, further reinforcing the potential for underground mining at Sunbird. Drilling will continue throughout the fourth quarter of 2022 to test the projected extensions at depth, with infill drilling to reduce drill hole spacing to further improve resource confidence planned for the first quarter of 2023.

Drilling on the upper southern margins of the southern high-grade core has extended mineralization an additional 75 meters to the south, with drill hole SGDD109 intersecting 10.2 g/t gold over a true width of 9.1 meters, remaining open along strike to the south as well as down-plunge. Sunbird´s mineralization consists of a set of near vertical quartz dominant veins demonstrating good continuity down-dip and along strike, reflecting the strong structural control present; consistent with the majority of the deposits drilled at Séguéla to date (refer to Figures 2 and 3). Refer to Appendix 1 for full results received for this recent 12-hole, 4,062-meter drill program. 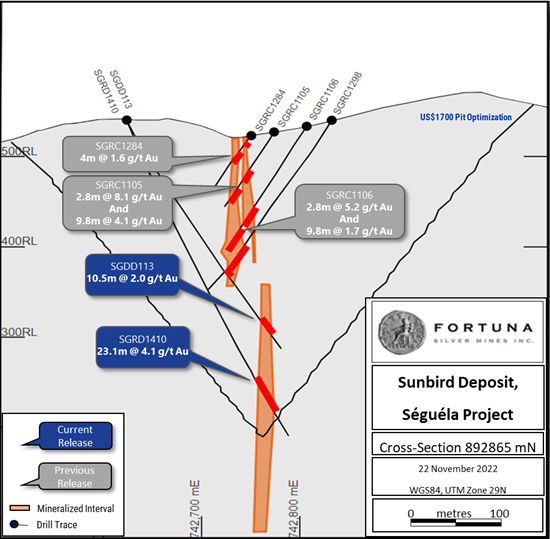 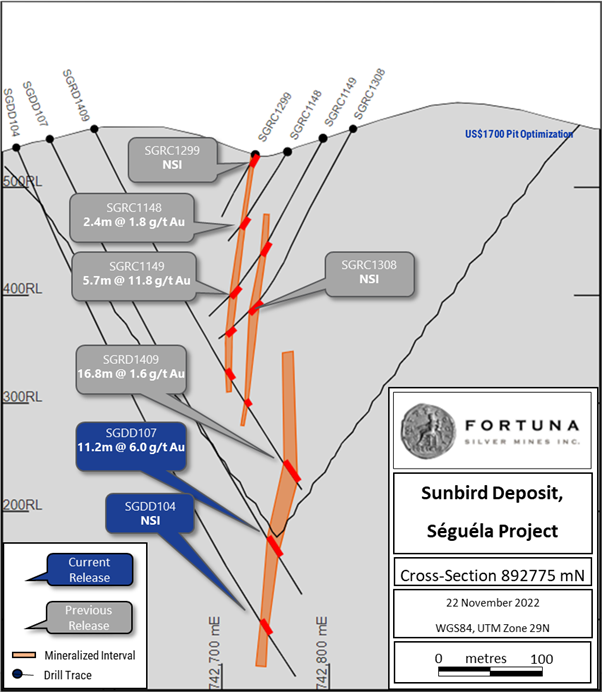 A 7-hole, 887-meter reconnaissance RC program was completed at Barana, located approximately 8 kilometers north of the Séguéla processing plant (refer to Figure 4) and 1 kilometer away from the Badior prospect.

Drilling was designed to test an extensive 1-kilometer long gold-in-soil anomaly, which returned several very encouraging intersections along a 750-meter strike, including 4.1 g/t gold over a true width of 4.9 meters from 64 meters in drill hole SGRC1533. Mineralization remains open at depth and along strike to the north and south. Logging of the drill chips has shown mineralization and alteration is hosted in a similar lithology package as that which hosts Antenna. Refer to Appendix 3 for full results.

Mineralization has been defined along a 200-meter strike, with a central high-grade core reflecting a similar structural setting as that at Koula and Sunbird, and where it remains open at depth. Kestrel is hosted in the same lithological package that hosts the Koula, Sunbird and Ancien deposits. Refer to Appendix 4 for full results. 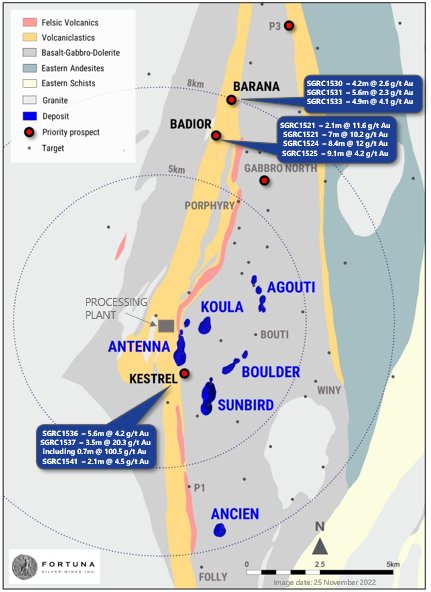 Quality Assurance & Quality Control (QA-QC)
All drilling data completed by the Company utilized the following procedures and methodologies. All drilling was carried out under the supervision of the Company’s personnel.

All RC drilling at Séguéla used a 5.25-inch face sampling pneumatic hammer with samples collected into 60-liter plastic bags. Samples were kept dry by maintaining enough air pressure to exclude groundwater inflow. If water ingress exceeded the air pressure, RC drilling was stopped, and drilling converted to diamond core tails. Once collected, RC samples were riffle split through a three-tier splitter to yield a 12.5% representative sample for submission to the analytical laboratory. The residual 87.5% samples were stored at the drill site until assay results were received and validated. Coarse reject samples for all mineralized samples corresponding to significant intervals are retained and stored on-site at the company-controlled core yard.

All diamond drilling (DD) drill holes at Séguéla were drilled with HQ sized diamond drill bits. The core was logged, marked up for sampling using standard lengths of one meter or to a geological boundary. Samples were then cut into equal halves using a diamond saw. One half of the core was left in the original core box and stored in a secure location at the company core yard at the project site. The other half was sampled, catalogued and placed into sealed bags and securely stored at the site until shipment.

All Séguéla RC and DD core samples were shipped to ALS Laboratories’ preparation laboratory in Yamoussoukro for preparation and then, via commercial courier, to ALS’s facility in Ouagadougou, Burkina Faso for finishing. Routine gold analysis using a 50-gram charge and fire assay with an atomic absorption finish was completed for all Séguéla samples. Quality control procedures included the systematic insertion of blanks, duplicates and sample standards into the sample stream. In addition, the ALS laboratory inserted its own quality control samples.

Paul Weedon, Senior Vice President of Exploration for Fortuna Silver Mines Inc., is a Qualified Person as defined by National Instrument 43-101 being a member of the Australian Institute of Geoscientists (Membership #6001). Mr. Weedon has reviewed and approved the scientific and technical information contained in this news release. Mr. Weedon has verified the data disclosed, and the sampling, analytical and test data underlying the information or opinions contained herein by reviewing geochemical and geological databases and reviewing diamond drill core. There were no limitations to the verification process.

Fortuna Silver Mines Inc. is a Canadian precious metals mining company with four operating mines in Argentina, Burkina Faso, Mexico and Peru, and a fifth mine under construction in Côte d’Ivoire. Sustainability is integral to all our operations and relationships. We produce gold and silver and generate shared value over the long-term for our stakeholders through efficient production, environmental protection, and social responsibility. For more information, please visit our website.

Forward looking Statements involve known and unknown risks, uncertainties and other factors which may cause the actual results, performance or achievements of the Company to be materially different from any results, performance or achievements expressed or implied by the Forward looking Statements. Such uncertainties and factors include, among others, changes in general economic conditions and financial markets; the duration and effects of the COVID-19 pandemic on our operations and workforce and the effects on the global economy and society; changes in prices for silver, gold and other metals; the timing of the Company’s proposed exploration programs at the Sunbird deposit and at the Séguéla gold Project in general; the success of the Company’s proposed exploration programs; technological and operational hazards in Fortuna’s mining and mine development activities; risks inherent in mineral exploration; fluctuations in prices for energy, labor, materials, supplies and services; fluctuations in currencies; uncertainties inherent in the estimation of mineral reserves, mineral resources, and metal recoveries; our ability to obtain all necessary permits, licenses and regulatory approvals in a timely manner; governmental and other approvals; political unrest or instability in countries where Fortuna is active; labor relations issues; as well as those factors discussed under “Risk Factors” in the Company’s Annual Information Form. Although the Company has attempted to identify important factors that could cause actual actions, events or results to differ materially from those described in Forward looking Statements, there may be other factors that cause actions, events or results to differ from those anticipated, estimated or intended.

Canadian standards, including NI 43-101, differ significantly from the requirements of the Securities and Exchange Commission, and mineral reserve and resource information included in this news release may not be comparable to similar information disclosed by U.S. companies.