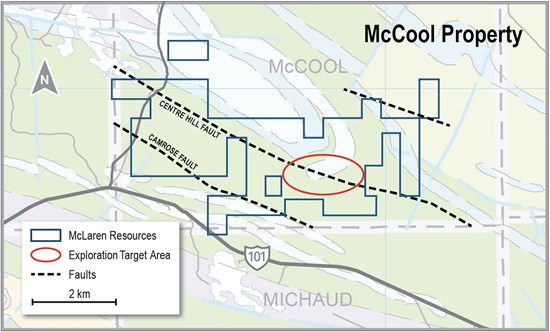 Toronto, Ontario–(Newsfile Corp. – October 5, 2022) – McLaren Resources Inc. (CSE: MCL) (FSE: 3ML) (“McLaren” or the “Company”) is pleased to announce that, after a successful equity financing (see news release dated September 29, 2022), it has commenced a phase two exploration diamond drilling program on its 100%-owned McCool gold property which is located in the prolific Timmins Gold Region of Northeastern Ontario, Canada where well over 70 million ounces of gold have been produced to date.

It is anticipated that the second phase exploration diamond drill program will consist of approximately 2,000 metres (“m”) of core drilling in 5 holes. This program follows on the heels of a recently completed first phase diamond drill program that consisted of 2,392 m of core drilling in 6 holes (see news release dated September 14, 2022). The primary purpose of both of these drill programs is to further evaluate and trace the significant gold mineralization known to exist on the property along the Centre Hill Fault from the work of previous owners undertaken during the period 1982-1987 (see August 31, 2022 news release, Table 1, containing selected historical drill results from the McCool property – Placer Development Limited).

These drill programs are also investigating induced polarization (“IP”) and ground magnetic (“GM”) geophysical anomalies that were outlined from ground geophysical surveys completed on a portion of the property in February 2022 (see news release dated February 23, 2022). The types of ground geophysical signatures discovered on the property are known to be closely associated with gold occurrences elsewhere in the general area.

Several of the holes drilled in the first program intersected wide intervals of intensely altered rocks along the Center Hill Fault that contained variable amounts of sulfide mineralization, fuchsite and sericite, all associated with gold mineralization elsewhere in the area. Core samples from the first drill program have been sent for assay and results will be released when results are received and interpreted.

The favorable exploration target area occurs on the eastern portion of the 1,650 hectares (“ha”) McCool gold property (see Map 1 below showing the favorable target area for gold in relation to the Centre Hill Fault, the sub-parallel Camrose Fault and the McCool Anticline). The first phase exploration drill program will focus on a select portion of the Centre Hill Fault, a northwest-trending fault structure which runs along the south side of the McCool Anticline and which is known to host significant gold mineralization on the McCool property. The Centre Hill Fault is interpreted to be a splay off of the major Destor- Porcupine Deformation Zone which is host to many gold deposits in the general area (see Map 2 below showing the location of the major gold-bearing faults, gold deposits and the property ownership of the various companies actively working in the area).

Map 1 – The favorable target area for gold in relation to the Centre Hill Fault, the sub-parallel Camrose Fault and the McCool Anticline.

Map 2 – The location of the major gold-bearing faults, gold deposits and the property ownership of the various companies actively working in the area.

As announced on October 4, 2021, McLaren acquired an additional 50 full mineral claims and 10 partial mineral claims, together comprising approximately 1,375 ha, from two independent prospectors from the Timmins area. The new claims are contiguous with the original McCool gold property and bring the total size of the property to approximately 1,650 ha. The majority of the new claims cover the northwest strike extension of the Centre Hill Fault. The expanded McCool gold property now covers an approximate five kilometer strike length of the gold-bearing Centre Hill Fault. McLaren’s expanded McCool gold property is ideally located immediately north of Highway 101 and abuts the Golden Highway Gold Project of Moneta Gold Inc. (“Moneta”) to the south. Moneta continues to intersect good grade gold mineralization on their property and continues to expand their gold resource in several areas of the property. The expanded McCool gold property also lies immediately east of the Fenn-Gib gold deposit where operator Mayfair Gold Corp. (“Mayfair”) has announced significant gold intersections from recent infill and step-out drilling on their property. HighGold Mining Inc. (“HighGold”) continues to aggressively explore significant gold mineralization on their CroesusMonroe Project located west of the McCool property and McEwen Mining Inc. continues to mine gold from its Black Fox Mine and further explore for gold on its significant landholdings along the Destor-Porcupine fault west of McLaren’s McCool gold property and southeast of McLaren’s Blue Quartz gold property.

The original 275 ha McCool gold property, along with McLaren’s 775 ha Kerrs gold property, were acquired from Newmont Corporation (“Newmont”) in mid-2020 in exchange for a four-year option on McLaren’s Augdome gold property which lies immediately east of Newmont’s past-producing Dome Gold Mine in Timmins (see news release dated May 14, 2020).

The information presented in this news release has been reviewed and approved by Kenneth Guy, P.Geo, a consultant to McLaren and the Qualified Person for McLaren, as defined by National Instrument 43-101 “Standards of Disclosure for Mineral Projects”.

McLaren has been focused on exploration work on its gold properties in the Timmins Gold Region of Northeastern Ontario. McLaren now owns a 100% interest in the past-producing, 640 ha, Blue Quartz Gold Mine property as well as the 1,650 ha McCool and 775 ha Kerrs gold properties, all located within the Abitibi Greenstone Belt along the Destor-Porcupine Deformation Zone, which is host to many of the gold deposits in the area, approximately 85 km east of Timmins city centre. McLaren also owns a 100% interest in the 408 ha Augdome gold property which is located in Tisdale and Whitney Townships immediately east of the Dome Mine owned by Newmont. The Augdome property is currently under a four-year option to Newmont.

This news release is not for distribution in the United States.

To view the source version of this press release, please visit https://www.newsfilecorp.com/release/139673