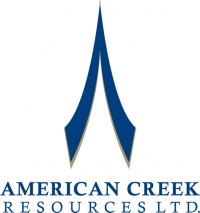 Cardston, Alberta–(Newsfile Corp. – August 11, 2022) – American Creek Resources Ltd. (TSXV: AMK) (“the Corporation” or “American Creek”) is pleased to present the fourth set of drill results from operator Tudor Gold for Phase l of the 2022 exploration program (the “Program“) at their flagship project, the Treaty Creek JV, located in the heart of the Golden Triangle of Northwestern British Columbia.

Ken Konkin, President and CEO, comments “During the 2021 drill program, we drilled hole GS-21-113-W2 to the maximum depth possible and noted that the strongest sulphide mineralization occurred at the bottom of this hole. A decision was made to leave the casing and HQ rods in GS-21-113-W2 with the plan of returning to re-enter the hole this year with a more powerful diamond drill rig and we succeeded! The hole was extended 280.1 meters (m) demonstrating that gold and copper grades increase with depth as the strongest mineralization occurs between 1520 m and 1688 m. This portion of the hole averages 2.48 g/t AuEQ over 168 m with copper averaging 0.82 %. Silver mineralization is also becoming stronger at depth within the CS600 domain. In addition, results from targeting the DS5 domain were also successful with drill hole GS-22-139 which intersected 428 m of 1.07 g/t AuEQ and included an enriched upper portion that averaged 1.36 g/t AuEQ over 172.4 m. As previously reported, high-grade visible native gold has occurred from two of three aggressive step-out holes that were 225-meter and 500-meter step-out holes from the 2021 drilling program within the northeastern sector of the Goldstorm Deposit. These high-grade gold results may add a new dimension to the exploration potential of this project and we will continue to advance and explore this rapidly expanding aspect of these well mineralized domains.”

The Program at the Treaty Creek property includes an aggressive resource expansion and delineation plan for several areas, including the Goldstorm Deposit and the Eureka and Calm Before the Storm Zones. Results included in this press release are reported from six diamond drill holes that were drilled on the Goldstorm Deposit from sections C and D. Five out of six holes were targeted outside the 2021 Mineral Resource Estimate area (see link: corresponding Treaty Creek plan map and sections).

The Qualified Person for this news release for the purposes of National Instrument 43-101 is Tudor Gold‘s President and CEO, Ken Konkin, P.Geo. Mr. Konkin heads the exploration being conducted at the Treaty Creek Joint Venture Project. He has read and approved the scientific and technical information that forms the basis for the disclosure contained in this news release.

Diamond drill core samples were prepared at MSA Labs’ Preparation Laboratory in Terrace, BC and assayed at MSA Labs’ Geochemical Laboratory in Langley, BC. Analytical accuracy and precision are monitored by the submission of blanks, certified standards and duplicate samples inserted at regular intervals into the sample stream by Tudor Gold personnel. MSA Laboratories quality system complies with the requirements for the International Standards ISO 17025 and ISO 9001. MSA Labs is independent of the Company.

The Corporation has an interest in the Treaty Creek property, a joint venture project with Tudor Gold located in BC’s prolific “Golden Triangle”.

Information relating to the Corporation is available on its website at www.americancreek.com

This news release contains “forward-looking information” within the meaning of applicable Canadian securities legislation. “Forward-looking information” includes, but is not limited to, statements with respect to the activities, events or developments that the Corporation expects or anticipates will or may occur in the future, including the completion and anticipated results of planned exploration activities. Generally, but not always, forward-looking information and statements can be identified by the use of words such as “plans”, “expects”, “is expected”, “budget”, “scheduled”, “estimates”, “forecasts”, “intends”, “anticipates”, or “believes” or the negative connotation thereof or variations of such words and phrases or state that certain actions, events or results “may”, “could”, “would”, “might” or “will be taken”, “occur” or “be achieved” or the negative connation thereof.

There can be no assurance that such statements will prove to be accurate and actual results and future events could differ materially from those anticipated in such statements. Important factors that could cause actual results to differ materially from the Corporation’s plans or expectations include risks relating to the actual results of current exploration activities, fluctuating gold prices, possibility of equipment breakdowns and delays, exploration cost overruns, availability of capital and financing, general economic, market or business conditions, regulatory changes, timeliness of government or regulatory approvals and other risks detailed herein and from time to time in the filings made by the Corporation with securities regulators.

To view the source version of this press release, please visit https://www.newsfilecorp.com/release/133514