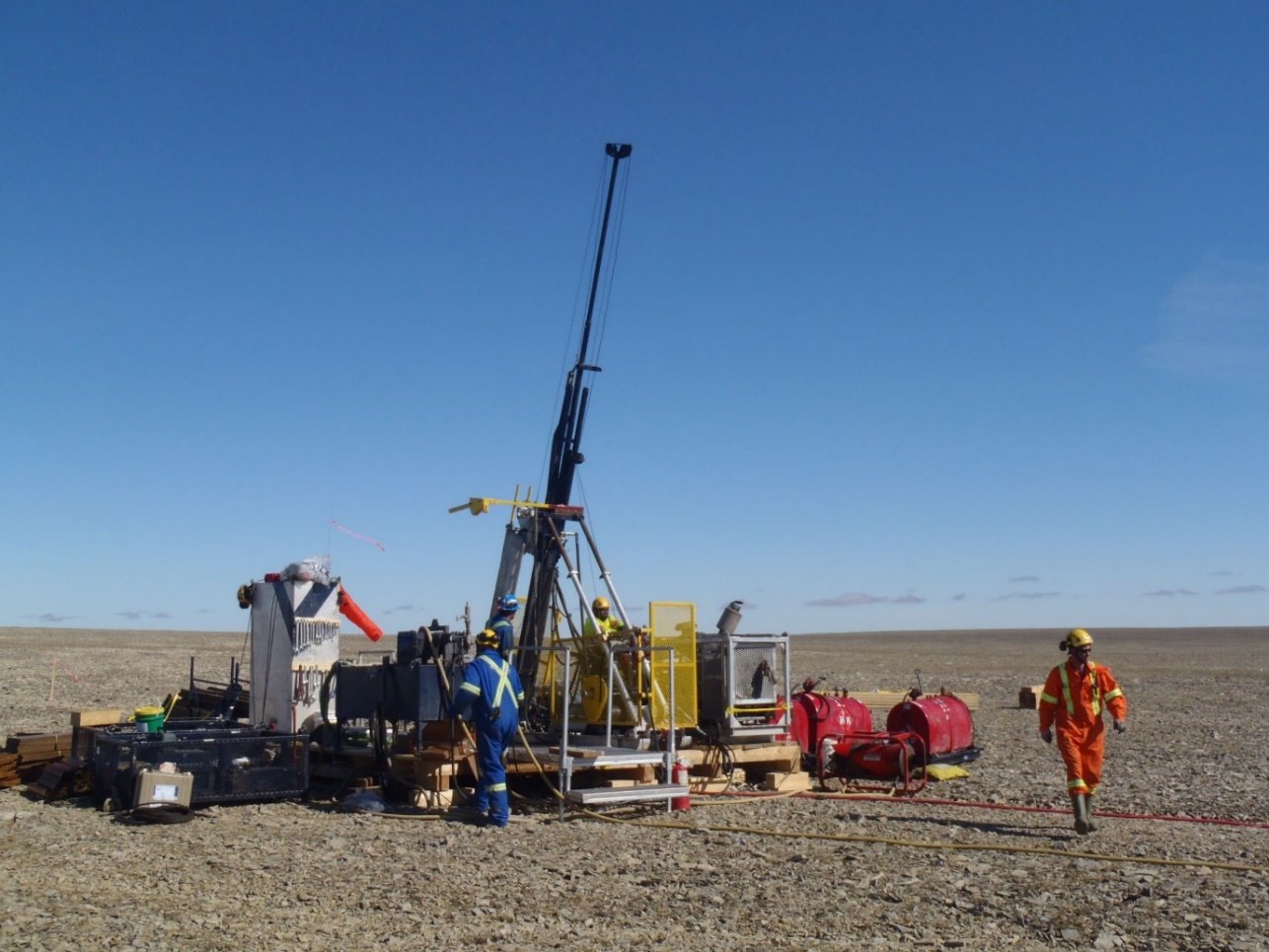 A major diamond drilling program is scheduled to commence at Storm next month to test key resource and exploration targets. This drilling program will be the first since American West became project operator under the option agreement with Aston Bay. American West has an option to earn an 80% interest in the Storm Project. APEX Geoscience Ltd. will manage and execute the program.

Drilling will also test a number of high-priority electromagnetic (EM) conductors that were identified by the 2021 fixed loop electromagnetic (FLEM) survey completed by American West over the Storm Project area. The survey identified multiple near-surface anomalies, some of which are coincident with outcropping copper occurrences, that are consistent with EM responses of known occurrences of massive chalcocite mineralization on the Storm property.

The 2021 survey also identified several large, flat-lying EM conductors that may represent a deeper, stratigraphic source to the near-surface mineralization. These anomalies present compelling targets for the discovery of a major sedimentary copper mineral system.

“We are excited to have our earn-in partner American West so swiftly advance the Storm Project,” stated Thomas Ullrich, CEO of Aston Bay. “The ground geophysical program completed last season has been instrumental in defining high-priority drill targets for this year, and the outstanding result of a >53% Cu direct ship product from ore-sorting tests conducted over the winter is conducive to low-impact mining.

“Storm has more than 14,000 metres of historical drilling with significant high-grade copper intercepts. The current program is designed to unlock the value of these intercepts by moving toward a resource that could support a mining proposal, as well as by expanding on these known areas of mineralization. We will also continue to drill for discovery in unexplored areas, targeting untested anomalies that may represent sizable zones of undiscovered high-grade copper mineralization.”

Resource definition this year will initially focus on defining potential shallow resources within the 2750N Zone.

Historical drilling within the 2750N Zone has encountered thick intervals of high-grade copper mineralization, including 110m* at 2.45% Cu from surface (drill hole ST97-08), and 56.3m* @ 3.07% Cu from 12.2m (drill hole ST99-19). Given the outstanding width of these intervals and the distance between drill holes (>100m), extension and infill drilling in the 2750N Zone gives the potential opportunity to quickly define large volumes of further copper mineralization.

Over 1,500 metres of drilling is initially planned in and around the 2750N Zone, with hole depths between 100-150m due to the shallow nature of mineralization.

The excellent results from the ore-sorting test work suggest that a shallow, high-grade resource is likely to be well suited to a low-footprint direct ship product (DSP) mining operation.

The survey identified two distinct types of EM anomalies which included strong, near-surface and sub-vertical conductors, as well as a series of large, deeper and generally flat-lying conductors (Figure 2).

Seven shallow conductors were identified during the 2021 FLEM survey that are interpreted as likely to represent untested zones of massive chalcocite mineralization. These anomalies are favorably situated along, or in close proximity to, the bounding faults of the Storm graben, and in areas of elevated density (Figure 2).

Importantly, the conductors east of the 2200N and 2750N Zones are also associated with significant copper in soil geochemical anomalies and outcropping copper mineralization.

With only very limited drilling into some of these areas of anomalism, the newly defined conductors present a number of compelling new and untested drill targets that will be tested during the upcoming drilling program.

Seven untested deeper conductors of interest were also identified during the 2021 survey (Figure 2, red rectangles). Six of the seven anomalies are located proximal to the bounding faults of the Storm graben.

The geometry and mostly gentle dips of the modeled deep EM conductors suggest that they may be related to stratiform type targets and may be indicative of traditional sedimentary type copper mineralization at depth. Given the highly resistive nature of the host geology (dolomites), even subtle conductors are considered to be highly prospective when combined with coincident geochemical or airborne gravity anomalies.

These present as compelling large-scale exploration targets that may represent the source of the near-surface high-grade copper already confirmed by shallow drilling. These new targets will be tested as part of the 2022 drill program.

The diamond drilling at Storm is expected to commence in early July, with the logistics and final planning currently underway. The results of the drilling program are expected to be released regularly given the highly visual nature of the copper mineralization and host geology.

There are numerous underexplored targets within the 120-kilometre (km) strike length of the mineralized trend, including the Tornado copper prospect where 10 grab samples yielded >1% Cu up to 32% Cu in gossans.

American West has an option to earn an 80% interest in the Storm Project.

*Stated drill hole intersections are all core length, and true width is expected to be 60% to 90% of core length.

Michael Dufresne, M.Sc., P.Geol., P.Geo., is a qualified person as defined by National Instrument 43-101 and has reviewed and approved the scientific and technical information in this press release.

Aston Bay is a publicly traded mineral exploration company exploring for base metals and gold deposits in Virginia, USA, and Nunavut, Canada. The Company is led by CEO Thomas Ullrich with exploration in Virginia directed by the Company’s advisor, Don Taylor, the 2018 Thayer Lindsley Award winner for his discovery of the Taylor Pb-Zn-Ag Deposit in Arizona. The Company is currently exploring the Mountain Base Metals Project and the Buckingham Gold Project in Virginia and is in advanced stages of negotiation on other lands in the area.

The Company is also 100% owner of the Storm Project property, which hosts the Storm Copper Project and the Seal Zinc Deposit and has been optioned to American West Metals Limited.

AMERICAN WEST METALS LIMITED (ASX: AW1) is a new Australian company focused on growth through the discovery and development of major base metal mineral deposits in Tier 1 jurisdictions of North America. We are a progressive mining company focused on developing mines that have a low footprint and support the global energy transformation.

Our portfolio of copper and zinc projects include significant existing resource inventories and high-grade mineralization that can generate robust mining proposals. Core to our approach is our commitment to the ethical extraction and processing of minerals and making a meaningful contribution to the communities where our projects are located.

Led by a highly experienced leadership team, our strategic initiatives lay the foundation for a sustainable business which aims to deliver high-multiplier returns on shareholder investment and economic benefits to all stakeholders.