MONTREAL, Nov. 28, 2022 (GLOBE NEWSWIRE) — Brunswick Exploration Inc. (TSX-V:BRW; “BRW” or the “Company”) is pleased to announce it has signed an option agreement with Osisko Development Corp. (TSX-V: ODV) to acquire a 90% interest in the Anatacau Property (the “Property”) located in the James Bay-Eeyou Istchee region of Quebec and which is host to lithium mineralization. Furthermore, one block of the Anatacau property is located just east of Allkem’s (TSX: AKE) James Bay Lithium deposit (previously known as the Cyr deposit).

Mr. Killian Charles, President of BRW, commented: “The addition of the Anatacau Property marks another exciting turning point for Brunswick Exploration. The Property covers 370 square kilometres, of which the western block is located just east of one of Canada’s largest hard rock lithium reserves. The Property may host an extension to the deposit as this area has never been drilled. Furthermore, Quebec government records indicate the presence of spodumene mineralization further east and south on the Property in three distinct outcrop locations. Alongside the Hearst property in Ontario, BRW now has two projects where it plans to test drill targets in Q1 2023.”

The large Anatacau property package contains a total of 704 claims, representing 37,058 hectares (370 sq. km.). The property is accessible year-round and is located near KM 381 on the Billy Diamond Highway (a camp managed by the Société de développement de la Baie-James), and the west block of the Property is adjacent to Allkem’s James Bay lithium deposit, which is host to a 40.3Mt Indicated Mineral Resource Estimate grading 1.4% Li2O and Reserves of 37.2Mt grading 1.3% Li2O (for more details, see Allkem December 21, 2021 Feasibility Study). Drilling in 2018 by Galaxy Lithium intersected spodumene mineralization near the Property boundary (MRNQ assessment files, GM 71028).

The Property has historically never been explored for lithium mineralization. Quebec government public records also indicate the presence of three spodumene-bearing pegmatite outcrops on the main block of the Property, one located approximately 22 kilometres ESE of the James Bay Lithium Deposit. The area will be prioritized for prospecting and trenching in summer 2023. BRW also expects to begin a drilling campaign in late Q1 2023 to test the potential for new lithium pegmatites along strike of those found on Allkem’s property.

The Option allows BRW to acquire a 90% interest in the Property for a total consideration of 4,000,000 shares over a two-year period, upon closing of the option agreement (the “Agreement”) under the following terms:

In order to exercise the Option; Brunswick Exploration shall fund an aggregate amount of $3,000,000 in Work Expenditures in accordance with the following schedule:

Upon execution of the Option, BRW will retain a right of first refusal on ODEV’s 10% ownership. Furthermore, ODEV will not be expected to fund its pro-rata share of the exploration budget following the exercise of the Option until the construction of a mine.

The scientific and technical information contained in this press release has been reviewed and approved by Mr. Jeff Hussey, Director of Brunswick Exploration. He is a Professional Geologist registered in Quebec.

Brunswick Exploration is a Montreal-based mineral exploration company listed on the TSX-V under the symbol BRW. The Company is focused on grassroots exploration for lithium in Eastern Canada, a critical metal necessary to global decarbonization and energy transition. The company is rapidly advancing the most extensive grassroots lithium property portfolio in Eastern Canada with holdings in Quebec, Ontario, New Brunswick and Newfoundland.

TASEKO COMMENTS ON POTENTIAL ACQUISITION OF 12.5% INTEREST IN GIBRALTAR MINE

TASEKO COMMENTS ON POTENTIAL ACQUISITION OF 12.5% INTEREST IN GIBRALTAR MINE
PR Newswire
VANCOUVER, BC, Feb. 3, 2023

/NOT FOR DISTRIBUTION TO UNITED STATES NEWSWIRE SERVICES OR FOR DISSEMINATION IN THE UNITED STATES/
ROUYN-NORANDA, QC , Feb. 3, 2023 /CNW Telbec/ – X-Terra Resour… 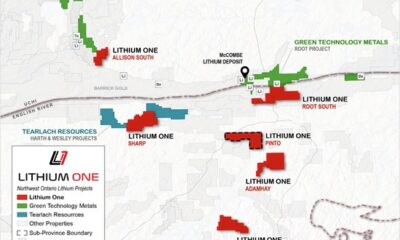