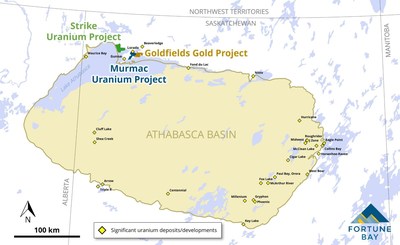 Dale Verran, CEO for Fortune Bay, commented, “We are pleased to announce an initial set of drill targets for Murmac which have the potential to yield a discovery of high-grade, basement-hosted uranium mineralization related to the Athabasca Basin. The maiden drilling program, scheduled to commence shortly, is planned to test an initial eight to ten targets along three prospective corridors. We look forward to reporting drill results for Murmac, in addition to results from the ongoing drilling at the Strike Uranium Project.”

Background
The Project is located within the original uranium mining district of Canada, lying between the historical Gunnar and Lorado Uranium Mines. The Project was explored for Beaverlodge-style uranium mineralization predominantly during the period 1960 to 1980. Historical exploration work focused on ground prospecting and sampling, followed by trenching and/or drill testing. Numerous high-grade (> 1% U3O8) uranium occurrences were discovered (see News Release dated September 28, 2021) demonstrating a significant endowment of uranium in the area. The numerous conductive units (graphite-bearing metasediments) were never systematically explored for high-grade, basement-hosted uranium mineralization typical of the Athabasca Basin and its margins. Due to their physical properties, the conductive units predominantly manifest as valleys and topographical lows, covered by overburden and small shallow lakes. These “blind” conductors have therefore not been amenable to historical surface prospecting and warrant drill testing where favorable targets have been identified. The Athabasca Basin margin is located approximately five kilometres to the south of the Project, indicating vertical proximity to the basal unconformity (now eroded) and good preservation potential for basement-hosted mineralization.

Drilling Program and Operational Details
Drilling of the initial target areas is expected to commence in the coming days following completion of drilling at the Strike Uranium Project. The Company has the required permits for the planned exploration activities.

Unless otherwise stated, the historical results (including drill results) contained within this news release have not been verified and there is a risk that any future confirmation work and exploration may produce results that substantially differ from the historical results. The Company considers these results relevant to assess the mineralization and economic potential of the property. The historical drill results obtained by SMDC in drill holes CKI-9 and CKI-10 can be found within the Saskatchewan Mineral Assessment Database (SMAD) references 74N07-0310 and 74N07-0311.

On behalf of Fortune Bay Corp.

Cautionary Statement Regarding Forward-Looking Information
Information set forth in this news release contains forward-looking statements that are based on assumptions as of the date of this news release. These statements reflect management’s current estimates, beliefs, intentions, and expectations. They are not guarantees of future performance. Words such as “expects”, “aims”, “anticipates”, “targets”, “goals”, “projects”, “intends”, “plans”, “believes”, “seeks”, “estimates”, “continues”, “may”, variations of such words, and similar expressions and references to future periods, are intended to identify such forward-looking statements. Fortune Bay Corp. (“Fortune Bay” or the “Company”) cautions that all forward-looking statements are inherently uncertain, and that actual performance may be affected by a number of material factors, many of which are beyond Fortune Bay’s control. Such factors include, among other things: risks and uncertainties relating to metal prices, changes in planned work resulting from weather, COVID-19 restrictions, availability of contractors, logistical, technical or other factors, the possibility that results of work will not fulfill expectations and realize the perceived potential of Fortune Bay’s mineral properties, uncertainties involved in the interpretation of drilling results and other tests, the possibility that required permits may not be obtained in a timely manner or at all, risk of accidents, equipment breakdowns or other unanticipated difficulties or interruptions, the possibility of cost overruns or unanticipated expenses in work programs, the risk of environmental contamination or damage resulting from the exploration operations, the need to comply with environmental and governmental regulations and the lack of availability of necessary capital, which may not be available to Fortune Bay, acceptable to it or at all. Fortune Bay is subject to the specific risks inherent in the mining business as well as general economic and business conditions. Accordingly, actual, and future events, conditions and results may differ materially from the estimates, beliefs, intentions, and expectations expressed or implied in the forward-looking information. Except as required under applicable securities legislation, Fortune Bay undertakes no obligation to publicly update or revise forward-looking information. Fortune Bay does not intend, and does not assume any obligation, to update these forward-looking statements, except as required under applicable securities legislation. For more information on Fortune Bay, readers should refer to Fortune Bay’s website at www.fortunebaycorp.com. 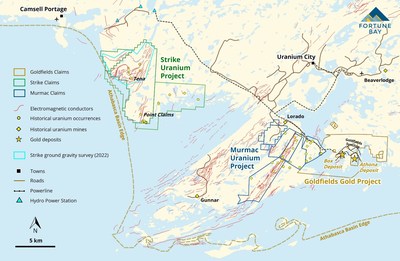 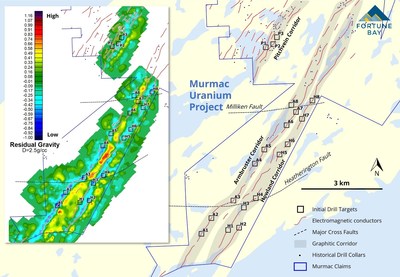 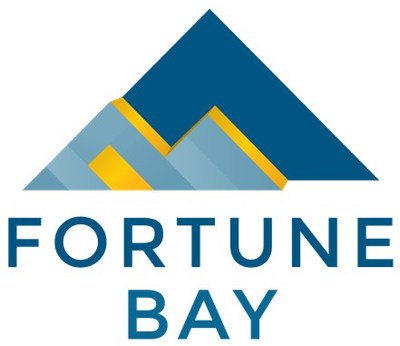