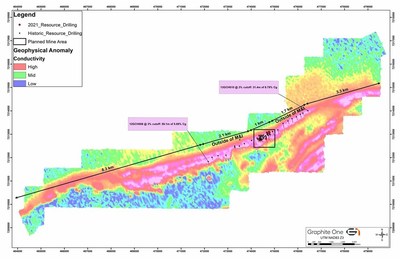 VANCOUVER, BC, June 8, 2022 /PRNewswire/ – Graphite One Inc. (TSXV: GPH) (OTCQX: GPHOF) (“Graphite One” “G1” or the “Company”), planning a complete domestic U.S. supply chain for advanced graphite materials, is pleased to announce drill results from its 2021 field program at its Graphite Creek Project (“Graphite Creek” or the “Project“), located in the Kigluaik Mountains on the Seward Peninsula approximately 37 miles north of Nome, Alaska. Graphite Creek is currently recognized by the US Geological Survey as the largest and highest grade graphite resource in the United States1.

The 2021 field program was conducted from July to October 2021 and comprised a total of 2,150 meters This included 8 core holes in the areas of inferred resources to upgrade them to measured and indicated resources, and 9 geotechnical holes.

The drill results will be included in the upcoming pre-feasibility study (“PFS“), with details provided below.

“Our 2021 drill results continue to demonstrate excellent continuity with our past exploration programs and should provide the opportunity to increase the resource and reserve estimates for the PFS”, said Anthony Huston, CEO of Graphite One.  “With our planned mine area of approximately 1 km of the overall 16 km anomaly, our deposit remains open downdip and along strike to the east and west of the known resource — demonstrating that Graphite Creek has potential to become a critical domestic graphite supply for the United States for a long time to come.”

Graphite One will be incorporating these drill results in its upcoming PFS, which is expected to be filed within 45 days from the date of this press release. The PFS will update the known mineral resource, while providing new economic guidance on the Project.

“The PFS will include the results from our 2021 program and should increase confidence that Graphite Creek is a generational asset — a vital graphite resource in the United States,”  continued Mr. Huston.  The United States currently has no domestic production and relies 100% on importing graphite to meet the nation’s energy transition needs.

On January 15, 2021 Graphite One received notice that the Company’s Graphite Creek Project has been designated a High-Priority Infrastructure Project (HPIP) by the U.S. Government’s Federal Permitting Improvement Steering Committee (FPISC). The approval is the culmination of a process that began on October 4, 2019 with Alaska Governor Mike Dunleavy’s nomination of Graphite One’s project for High-Priority Infrastructure Project designation.

“Designating the Graphite Creek Project as a High-Priority Infrastructure Project will send a strong signal that the U.S. intends to end the days of our 100% import-dependency for this increasingly critical mineral,” said Alaska Governor Mike Dunleavy in his nomination letter.

According to the FPISC’s notice letter, the FPISC has “…determined, in consultation with [Office of Management and Budget] OMB and [Council on Environmental Quality] CEQ, that this project clearly qualifies under the ‘manufacturing’ and ‘renewable energy’ sectors, among several other sectors.”

The Graphite Creek designation came as the Biden Adminstration highlighted electric vehicles (“EV”) and EV infrastructure as central to green energy policy. According to renewable energy analyst Simon Moores of the UK’s Benchmarket Minerals Intelligence: “What we expect from the Biden Administration is to simply make one of their policies to make gigafactories across the whole country at scale in order to turbo-charge and protect their biggest automobile companies such as Ford Motor Co. (NYSE:F) and General Motors Co. (NYSE:GM).” As Shane Lasley of North of 60 Mining News reports in regard to the EV and renewable energy sectors, “Tesla (NASDAQ:TSLA) is not the only automarket vying for graphite and other battery metals. With every major carmaker adding electrified models to their lineup, the number of EVs being built each year is expected to expand from about 2 million this year to more than 25 million by 2030 and 55 million by 2040.”

Highlights of the results are provided in the following table:

The 2021 field program also included engineering and environmental studies in proposed millsite and tailings/mine rock management areas, and along the proposed access corridor connecting to the State-maintained road system on the Seward Peninsula.  The field program also continued environmental baseline studies across the project area. This work will provide input for the PFS that is anticipated to be completed by mid-2022 and will also help guide the 2022 field program and the anticipated Feasibility Study to follow.

Graphite One maintains a rigorous QA/QC program with respect to the preparation, shipping, analysis and checking of all samples and data from the property. Quality control for drill programs at the Company’s projects covers the complete chain of custody of samples, including verification of drill hole locations (collar surveys and down-hole directional surveys), core handling procedures (logging, sampling, sample shipping) and analytical-related work, including duplicate sampling, “check analyses” at other laboratories and the insertion of standard and blank materials. The QA/QC program also includes data verification procedures.

Mr. Andrew K. Angel, P. Geo, with Alaska Earth Sciences, Inc. (AES) provided oversite to the 2021 drilling and sampling program. Mr. Angel is a Qualified Person as defined under NI 43‐101 and has reviewed and approved the technical content of this release.

With the United States currently 100 per cent import dependent for natural graphite, Graphite One is planning to develop a complete U.S.-based, advanced graphite supply chain solution anchored by the Graphite Creek resource near Nome, Alaska. The Graphite One project plan us anticipated to include an advanced graphite material and battery anode manufacturing plant expected to be sited in Washington State  with the development of the Graphite Creek resource. The plan includes a recycling facility to reclaim graphite and the other battery materials, to be co-located at the Washington State site, the third link in Graphite One’s circular economy strategy.

As announced on March 7th3, Graphite One’s Graphite Creek resource in Alaska has been cited as the largest known graphite deposit in the United States by the U.S. Geological Survey (USGS) in its updated U.S. Mineral Deposit Database (USMIN).

The USGS report confirms Alaska Governor Mike Dunleavy’s statement in support of Graphite One’s designation as a U.S. government high-priority infrastructure project, stating, “Graphite Creek is the largest deposit of graphite in the nation and would be a superior domestic supply of this critical mineral.

GRAPHITE ONE INC. (GPH: TSX‐V; GPHOF: OTCQB) continues to develop its Graphite One Project (the “Project”), whereby the Company could potentially become an American producer of high grade anode materials that is integrated with a domestic graphite resource. The Project is proposed as a vertically integrated enterprise to mine, process and manufacture high grade anode materials primarily for the lithium‐ion electric vehicle battery market.  As set forth in the Company’s Preliminary Economic Assessment, potential graphite mineralization mined from the Company’s Graphite Creek Property, is expected to be processed into concentrate at a graphite processing plant. The proposed processing plant would be located on the Graphite Creek Property situated on the Seward Peninsula about 60 kilometers north of Nome, Alaska.  Graphite anodes and other value‐added graphite products would be manufactured from the concentrate and other materials at the Company’s proposed advanced graphite materials manufacturing facility, the location of which is the subject of further study and analysis.  The Company intends to make a production decision on the Project once a feasibility study is completed.

All statements in this release, other than statements of historical facts, including those related to the timing and completion of the anticipated Preliminary Feasibility Study, future production, establishment of a processing plant and a graphite manufacturing plant, establishment of a battery materials recycling facility, and events or developments that the Company intends, expects, plans, or proposes are forward-looking statements Generally, forward‐looking information can be identified by the use of forward‐looking terminology such as “proposes”, “expects”, “is expected”, “scheduled”, “estimates”, “projects”, “plans”, “is planning”, “intends”, “assumes”, “believes”, “indicates”, “to be” or variations of such words and phrases that state that certain actions, events or results “may”, “could”, “would”, “might” or “will be taken”, “occur” or “be achieved”. The Company cautions that there is no certainty that tests of the Company’s material will be successful or that such tests will result in the development of successful products. Although the Company believes the expectations expressed in such forward-looking statements are based on reasonable assumptions, such statements are not guarantees of future performance and actual results or developments may differ materially from those in the forward-looking statements. Factors that could cause actual results to differ materially from those in forward-looking statements include market prices, exploitation and exploration successes, continuity of mineralization, uncertainties related to the ability to obtain necessary permits, licenses and title and delays due to third party opposition, changes in government policies regarding mining and natural resource exploration and exploitation, and continued availability of capital and financing, and general economic, market or business conditions. Readers are cautioned not to place undue reliance on this forward-looking information, which is given as of the date it is expressed in this press release, and the Company undertakes no obligation to update publicly or revise any forward-looking information, except as required by applicable securities laws. For more information on the Company, investors should review the Company’s continuous disclosure filings that are available at www.sedar.com.