CALGARY, ALBERTA – TheNewswire – November 3, 2022 – Lithium Chile Inc. (“Lithium Chile” or the “Company”) (TSX:LITH) (OTC:LTMCF) is pleased to provide an operational update on its Phase Two development program at Salar de Arizaro (“Arizaro”) in Argentina. The Company reports the completion of its second production well, Argento 2, drilled to a total depth of 649 metres. The brine aquifer identified was 255 metres thick; a significant increase from the 132 metre aquifer on its maiden well previously reported in its initial NI 43-101 report (see NR February 8, 2022), with an indicated and inferred resource of 1,420,000 tonnes of lithium carbonate equivalent (LCE).

With the knowledge gained from the recent drilling activity on the Company’s Salar de Arizaro project, the Company has contracted another diamond drill rig. Four to five new exploration wells will be drilled to expand testing on other sections of the property. The ongoing exploration program is yielding valuable understanding of the structure and composition of the underlying lithium bearing aquifer.

Steve Cochrane, President, and CEO comments, “The completion of the second production well is a major milestone in Lithium Chiles development. Firstly, moving out 3.6 kilometers and hitting the brine bearing formation just 23 meters deeper in the basin then the first production well is extremely encouraging. Secondly, almost doubling the thickness of the lithium brine aquifer from 132 meters to 255 meters should significantly increase the resource potential on the Salar de Arizaro. My sincere appreciation and congratulations to all the great work our team members are doing in both Argentina and Chile”. 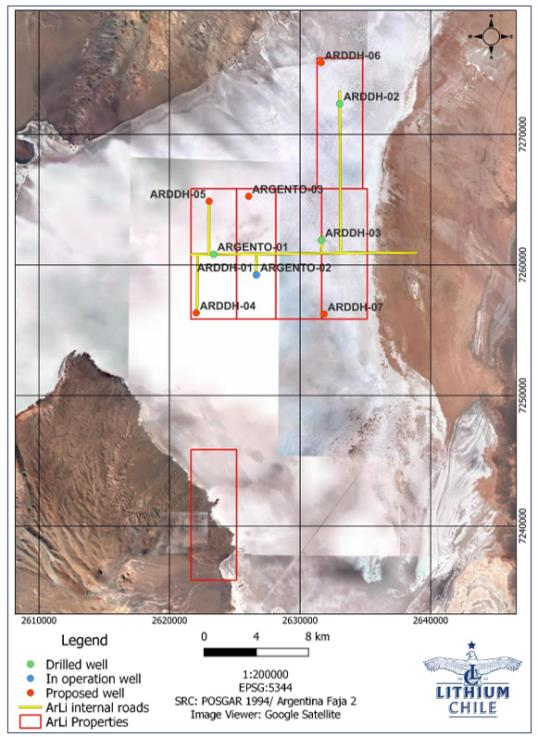 Lithium Chile has been advised that Chengze Lithium International Limited (“Chengze”) received an Order from the Investment Review Division, Canada.  Chengze owns approximately 19.35% of Lithium Chile’s outstanding common shares.  At this time, Chengze is reviewing the directions of the Order, and their legal options.

Michael Rosko, MS, PG, of Montgomery and Associates (M&A) of Santiago, Chile, is a registered geologist (CPG) in Arizona, California and Texas, a registered member of the Society for Mining, Metallurgy and Exploration (SME No. 4064687), and a qualified person as defined by National Instrument 43-101. Mr. Rosko has extensive experience in salar environments and has been a qualified person on many lithium brine projects. Mr. Rosko and M&A are completely independent of Lithium Chile. Mr. Rosko has reviewed and approved the scientific and technical content of this news release.

Lithium Chile is advancing a lithium property portfolio consisting of 84,478 hectares covering sections of 11 salars and 2 laguna complexes in Chile and 23,300 hectares in Argentina.

NOT FOR RELEASE IN THE UNITED STATES