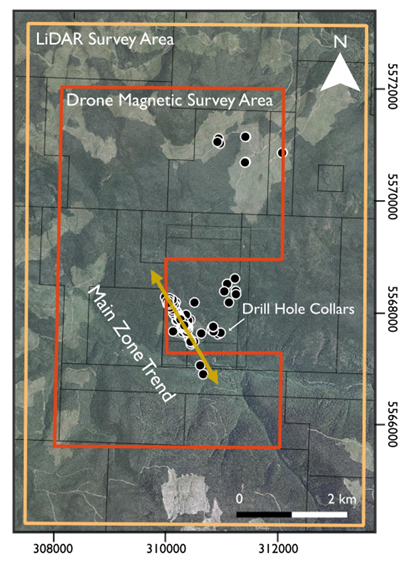 VANCOUVER, BC / ACCESSWIRE / June 30, 2022 / Ximen Mining Corp. (TSXV:XIM)(FRA:1XMA)(OTCQB:XXMMF) (the “Company” or “Ximen”) announces that it is planning to conduct airborne magnetic and LIDAR geophysical surveys at its Brett property near Vernon in southern British Columbia.

The Brett epithermal gold property covers 20,000 hectares and 17 mineral occurrences located 30 kilometres west of Vernon, in southern B.C. Drilling at the Brett project has been delayed due to the effects of last year’s wildfire. The program for 2022 will now include a drone-based airborne magnetic survey and a helicopter LIDAR survey. These new surveys are being done to provide base information for exploring extensions to the Main and parallel zones.

The magnetic survey will include 487 line-km to be flown at 50m spaced flight lines using a DRONE-MAG system, which consists of a multi-rotor UAV platform with a GSMP-35U potassium vapor magnetometer magnetometer, and GSM-19 Over Hauser base stations.

The LIDAR survey will consist of 54 km² of lidar and orthophoto data to be collected with a Phoenix Ranger Lidar scanner via a manned helicopter.

The magnetic results will be used to map the distribution of rock types beneath cover and identify possible de-magnetized zones associated with mineralization. The LIDAR will be used for lineament analysis and as a detailed topographic base.

Technical disclosure in this news release has been approved by Dr. Mathew Ball, P.Geo., VP Exploration for Ximen Mining Corp. and a Qualified Person as defined by National Instrument 43-101.

Ximen Mining Corp. owns 100% interest in three of its precious metal projects located in southern BC. Ximen`s two Gold projects, The Amelia Gold Mine and The Brett Epithermal Gold Project. Ximen also owns the Treasure Mountain Silver Project adjacent to the past producing Huldra Silver Mine. Currently, the Treasure Mountain Silver Project is under an option agreement. The option partner is making annual staged cash and stocks payments as well as funding the development of the project. The company has also acquired control of the Kenville Gold mine near Nelson British Columbia which comes with surface and underground rights, buildings and equipment.