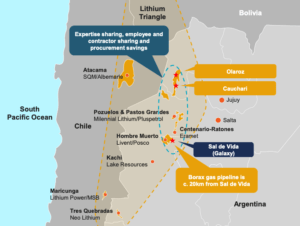 The merger will unlock significant synergies for the merged company, create a diversified production base, and realise significant value for shareholders, said the companies.

“The logic of this merger is compelling,” said Orocobre chairman, Robert Hubbard, who becomes deputy chairman of the new merged company.

“Both Orocobre and Galaxy shareholders will benefit from the diversification, growth and scale of a top five global lithium chemicals company,” he said.

The companies have a complementary portfolio of brine and hard rock lithium assets spread across Australia and Argentina and a vertically-integrated supply chain.

The new company is expected to be included in the ASX 200 index and approaches the market value threshold for inclusion in the ASX 100 index.

Orocobre shareholders own 54.2 per cent of merged company

The boards of the two companies have signed a binding Merger Implementation Deed whereby Orocobre will acquire 100 per cent of the shares of Galaxy Resources.

Orocobre’s and Galaxy Resources’ boards have agreed to the merger through a Galaxy Scheme of Arrangement subject to no competing proposal appearing for the company.

A new name has yet to be selected for the new merged company which will have its head office in Buenos Aires, Argentina, and a corporate headquarters on Australia’s east coast.

“This transaction has the potential to be a significant value-creating opportunity for Galaxy and Orocobre shareholders,” said Galaxy Resources chairman, Martin Rowley, the new company’s non-executive chairman.

The new board of the merged company will have four independent directors from Orocobre and four from Galaxy Resources and Orocobre’s current chief executive.

Both Hubbard and Rowley are to step down from their roles as chairman and deputy chairman of the new company one year after the merger is implemented in August this year.

Galaxy Resources chief executive, Simon Hay, steps into a new role with the merged company as president of international business reporting to the chief executive.

Participation in the merger will provide significant benefits to Galaxy Resources shareholders in being part of a larger diversified group and help to advance its projects’ development.

“The merged entity’s growth opportunities in both brine and hard rock position it uniquely to take advantage of expected rising EV demand for lithium,” said Rowley.

The new company will have an industry-leading growth profile and an enhanced financial position to optimise and accelerate development of its lithium assets.

“The merger consolidates the combined group’s position in Argentina and will give us signifiant operational, technical, and financial flexibility to deliver the full value of our combined portfolio,” said Orocobre chief executive and managing director, Martin Pérez de Solay, who takes on the same roles in the new merged group.

Solay is to oversee the integration process for the new merged company and with its board, determine an optimal management team that draws from employees of both companies.

The merged company will have a strong balance sheet with cash of $US487m making it well positioned to develop its world-class lithium projects with a production capacity of 40,000 tonnes per year.

Orocobre has its Olaroz and Cauchari lithium carbonate projects also in Argentina, and the Naraha lithium-ion hydroxide conversion facility in Japan for 10,000 tonnes per year.

The ASX lithium sector has seen some takeover activity in the past year as companies seek economies of scale and project synergies in order to get positioned for the next boom.

Pilbara Minerals (ASX:PLS) reached out to the creditors of defunct lithium explorer Altura Mining (ASX:AJM) to acquire its lithium operation in WA for $247.8m.

IGO (ASX:IGO) has shed its stake in the Tropicana gold mine to Regis Resources (ASX:RRL) to concentrate on its lithium assets including its newly-acquired Greenbushes project.