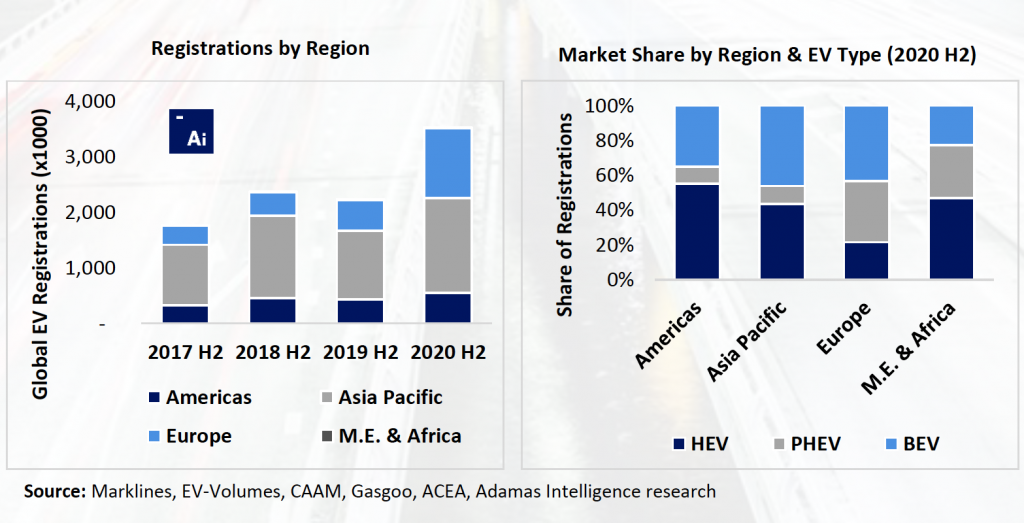 In the second half of 2020, global passenger EV registrations grew by 58% year-on-year, a new biannual report by Adamas Intelligence reveals.

Asia Pacific, on the other hand, posted a modest 38% gain in EV sales, while in the Americas they were 28% larger.

Global battery capacity deployed in all newly sold passenger EVs combined amounted to 92.5 GWh, 93% more than was deployed in H2-2019.

In terms of manufacturers, Adamas Intelligence’s research found that Tesla continued to ‘lead the pack’ by battery capacity and battery metals deployed globally in H2-2020 on the back of the strong global sales of the Tesla Model 3.

When it comes to specific chemistries, Adamas found that the deployment (in watt-hours) of LFP cells grew more than six-fold in H2-2020 versus H2-2019, contributing to a boost in the sales-weighted average amount of lithium used per EV.

Looking at battery-grade nickel, the market researcher noted that 53,150 tonnes of the metal were deployed in batteries of all newly sold passenger EVs combined in H2-2020, which meant a 69% rise that what was deployed all around the world in the same period the year before.

Finally, the report shows that over 12,700 tonnes of cobalt were deployed globally in batteries of all newly sold passenger EVs combined. This was 85% more than what was deployed in H2-2019.