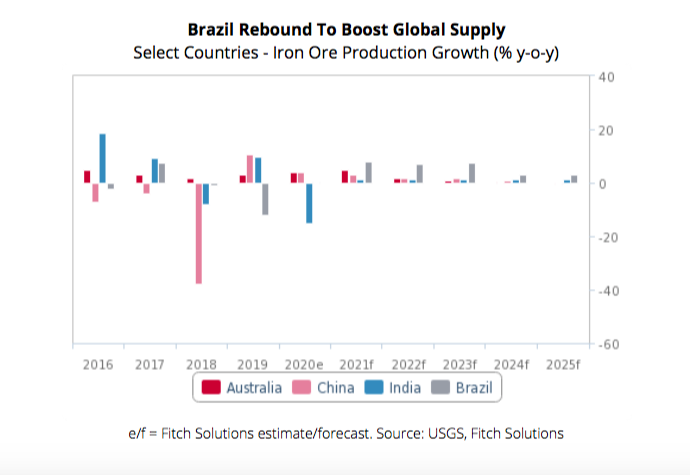 Global iron ore production growth will accelerate in the coming years, bringing an end to the stagnation that has persisted since iron ore prices hit a decade-low average of $55 per tonne in 2015, market analyst Fitch Solutions predicts in its latest industry report.

Fitch forecasts global mine output growth to average 2.4% over 2021-2025 compared to the negative 2% over the previous five years. This would lift annual production by 378 million tonnes in 2025 compared to 2020 levels, roughly the equivalent of India and Russia’s combined 2020 output, Fitch says.

Fitch forecasts iron ore production in Australia to grow at an annual average of 1.7% over 2021-2025. While significantly slower than 3.4% over the previous five years, this would still lift annual output by 84 million tonnes compared to 2020 levels by 2025.

The analyst believes Australia’s seating at the lowest-end of the global iron ore cost curve will provide a healthy buffer against falling prices in the coming years. On average, the cost of producing iron ore in Australia is $30/tonne, compared with $40-50/tonne in West Africa and $90/tonne in China.

Production growth in Australia will stagnate over the longer term, and Fitch predicts production to actually peak around mid-decade at around 1.05 billion tonnes. This production slowdown will be due to mothballing of mines by junior miners and a pullback in capital expenditure by larger firms as iron ore prices decline, Fitch says.

China’s iron ore production will stabilise in the coming years, having declined significantly over recent years, and Fitch forecasts production to remain around 900 million tonnes over the coming decade, which would be around one-third lower than the 2015 level of 1.4 billion tonnes. Growth in output will be prevented by weak iron ore prices and tightening environmental regulations, Fitch notes.

According to Bloomberg, around 70% of Chinese iron ore output is uneconomical at prices below $96/tonne. In particular, Fitch notes, miners operating in provinces such as Hebei, Fujian, Guangdong and Xinjiang will take the strain of lower prices due to their sitting at the highest end of the iron ore cost curve.

Over 2021, a global economic recovery from the covid-19 pandemic will drive stronger consumption of iron ore. Fitch forecasts global steel production to grow by 4.9% in 2021 after contracting by 0.1% in 2020. This will be driven by 7.5% growth in steel production in China and 6.2% growth in India, the two largest steel producers.

Looking further ahead, Fitch expects global iron ore consumption to steadily slow over subsequent years. Fitch forecasts global steel production to grow at an annual average of 32% over 2021-2025 and then by just 1.4% over 2026-2030.

What is potential GDP, and why is it so controversial right now?