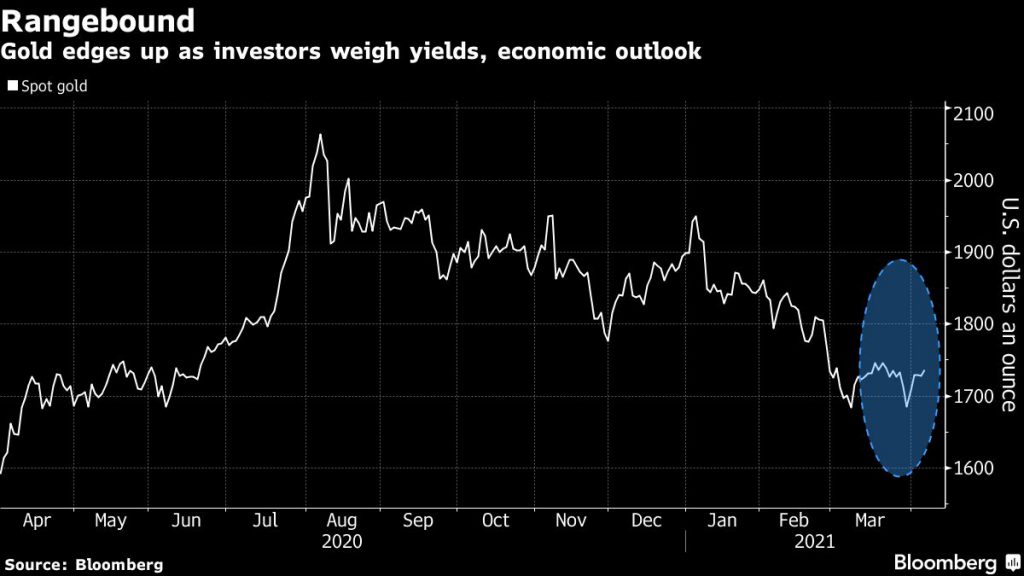 Gold prices advanced to their highest in more than a week on Tuesday as gains in bond yields and the dollar abated.

In the meantime, treasury yields edged down from a recent high, increasing the allure of bullion, which yields no interest. The dollar gave back early gains, making gold more appealing to investors holding other currencies.

The ebb is taking place even as positive economic data for the month of March shows rapid growth for US businesses and jobs. That’s “good news for gold,” writes Commerzbank AG analyst Carsten Fritsch in a Bloomberg note.

Gold has been under pressure this year because of increasing optimism over the post-pandemic economic recovery in the US, which buoyed bond yields and the dollar.

Investors fled bullion-backed exchange-traded funds, a major pillar in gold’s ascent to an all-time high last year, with holdings in ETFs dropping to the lowest since May.

“Now, bullion could have new tailwinds ahead. If concerns emerge that the US economy might overheat as a result of massive fiscal stimulus, gold would be the big winner,” Fritsch predicts.

Earlier in the day, economists at Citibank said they expect gold to see further sideways trading between the $1,700-$1,900 range for the rest of the year.

(With files from Bloomberg)