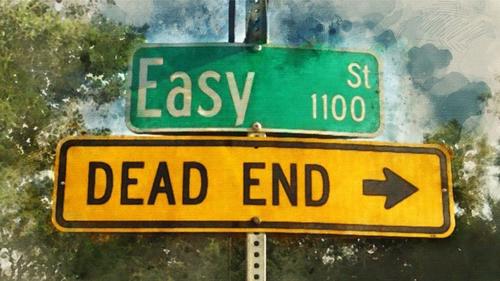 Kass: The Bull Market In Complacency & "First-Level Thinking" Is Back

"Thomas Friedman famously described 9-11 as a failure of imagination. Few people imagined that terrorists could pull off a coordinated attack of the complexity that occurred on that terrible day despite hints that something was being planned.

But our intelligence agencies were unable to cobble together the scattered pieces of data that might have told them what was coming because of the improbability of the plan and their own lapses. This is often the case with respect to the types of risks that lead to crises - the information that would allow us to prepare or even prevent them are often hiding in plain sight but rarely laid out in a neat pattern. In almost every case, crises are examples of chaos theory in action that belie prediction and preparation.

Recent events reinforce the lesson that mankind must try to imagine what can go wrong in a highly interconnected yet unstable world whose financial, intellectual and moral foundations are under intense (and growing) stresses. The recent collapse of Texas's power grid demonstrated the fragility of vital life sustaining systems. Watching the territory that lies at the heart of the nation's energy industry suffer massive power outages was a disturbing reminder of our fragility and vulnerability. Powerful natural and human forces are reshaping and destabilizing our political, economic and physical environments.

Today we live in an interconnected and networked world which poses a number of existential threats. These threats are real and are capable of causing catastrophic human and financial losses if we fail to plan for them. In certain cases some of this risks are not potential, they are kinetic:

Back to Mike Lewitt:

"These are not theoretical risks. We experienced several of them over the last twelve months. We saw political violence in many areas of the country fomented by both ends of the political spectrum culminating in the attack on the Capitol on January 6th.

We also witnessed financial market system failures (and poor risk management) destroy significant amounts of capital in a number of hedge funds. And then Texas, a state thought to be thriving, experienced an infrastructure failure that caused death, destruction and huge financial losses (the latest damage estimate was $28 billion).

And of course all of these events occurred in the larger context of a global pandemic that began a year ago and already cost America half a million souls (and the world two and a half million) and untold economic and business losses. In each case, better planning would have significantly mitigated human and financial losses, but more critically, a less politicized approach would have produced far more optimal outcomes.

It's not as if short squeezes, severe weather and pandemics are unusual occurrences. They occur with some frequency, the only question being their severity. Most of the time we are lucky and small problems don't grow into big problems, but recently that has not been the case and small fires grew into bonfires.

We were aware of all of these risks before they materialized though of course nobody could predict their precise timing. But the inability to predict their timing didn't relieve us of the responsibility to be better prepared for them and to manage them more effectively than we did."

Fundamentally-based investors are of two minds.

Bullish observers are of the belief that the historic level of monetary and fiscal stimulus, which emerged from the spread of Covid-19, will create a lengthy runway of corporate profit and economic growth at a time in which low interest rates may fuel ever higher valuations.

Bearish observers see a market bubble, dangerous levels of speculation and a fully priced universe of stocks that have more than discounted the bright profit and economic prospects. They argue that the ramifications of speedier growth are higher interest rates that will deflate valuations. They also see unsustainable debt loads that will serve as a governor to growth.

Technically-based observers who worship at the altar of price - and stock charts - see the current momentum as a strong "all clear" signal. They mostly reject any or all of the two fundamental arguments and in the very essence of calculation of "fair market value." Though I don't use technicals in a very meaningful way, I am respectful of the methodology (though I find the mutual respect of technicians to fundamentals is sometimes not returned!) and I thought this should be mentioned as it embodies the views of many on our site and elsewhere.

I side with the fundamentally-based Bears.

My view is that the runway of growth faces many obstacles and headwinds and that those that are looking for a sustained economic boom may be disappointed.

It is important to recognize that the sharpest recovery from Covid-19 will be in areas - restaurants and travel - that represent less than 10% of consumer spending and less than 5% of GDP. In other words, the impact on growth, in the aggregate, will be minimal. Meanwhile, the much larger and more important technology and capital goods sectors - that have benefited from the economic distortions over the last year - will be slowing in the so called post-pandemic spending boom.

Getting back to the consumer, lost by the bulls may be the new normal in the savings rate (Rosie forecasts from 7% to 10%) and a general debt paydown which could adversely impact even the anticipated swift recovery in consumer spending.

Moreover, though multiple government stimulus checks have buoyed the consumer, transfer payments only plug the holes, as they don't improve productivity or involve reskilling. And, beginning in the second half of 2021, that benefit will be lost.

I again shift to valuation and ask the question whether the optimism is already reflected in stock prices. Yes, recovery is at hand but growth is priced in - should growth fail to emerge relative to consensus, Katie Bar The Doors.

For the second time in the last few years, it is my view that, for investors with a less than 1-2 year timeframe, most equities should now be sold:

Some Future I Told You So's

"Here are our nominees for the "We Told You So(s)" of the future, items that may not only separate the survivors from the road kill, but also give deep satisfaction to the "lonely prophets":

Cryptocurrencies are and will be recognized as completely lacking in value. The only "crypt" aspect of them is the receptacle that the suckers' hard-earned (we are being kind) lucre will be buried. This prediction is particularly brazen on our part, given the recent price action in cryptos - but "in for a penny, in for a digital scam."

Inflation will match, then surpass, then soar above the targets of the peculiar folk who inhabit central banks and whose job they think it is to raise inflation, end inequality, ameliorate the climate, expunge Covid-19, and cure dandruff. By golly, there is no human problem that cannot be solved by newly printed [soon-to-be] worthless "money" - at least until it all goes pear-shaped and people wonder "was it always true that 1 plus 1 equals 2? Why did we ever doubt that?"

With the world's central bankers still in "pedal to the floor" mode, and the world's treasury secretaries in full bore "if they print it, we will spend it" mode, most investors cannot envision any other stock market scenario than up, up and away. We are in a different frame of mind.

We are mightily impressed by the extremity of valuation metrics, by the historical unanimity of negative outcomes from these kinds of valuations and by the disconnect between the seeming inability to generate "sufficient" consumer price inflation and the clear historical difficulty of maintaining the purchasing power of fiat currency not backed by anything. Common sense tells us that the authorities will get the inflation they are desperate to achieve, and that once it gets rolling, it will surprise (almost) everyone. Experience also tells us that it is preposterous to price equities on a discount rate that is as abnormal and manipulated as it is presently, and that bond yields at current super-low levels are an accident waiting to happen.

Compared with our dark views about this year's financial market prospects, we are also cognizant that betting hard against the financial markets' "happy view" is probably a terrible idea, and that going to cash is not any better."