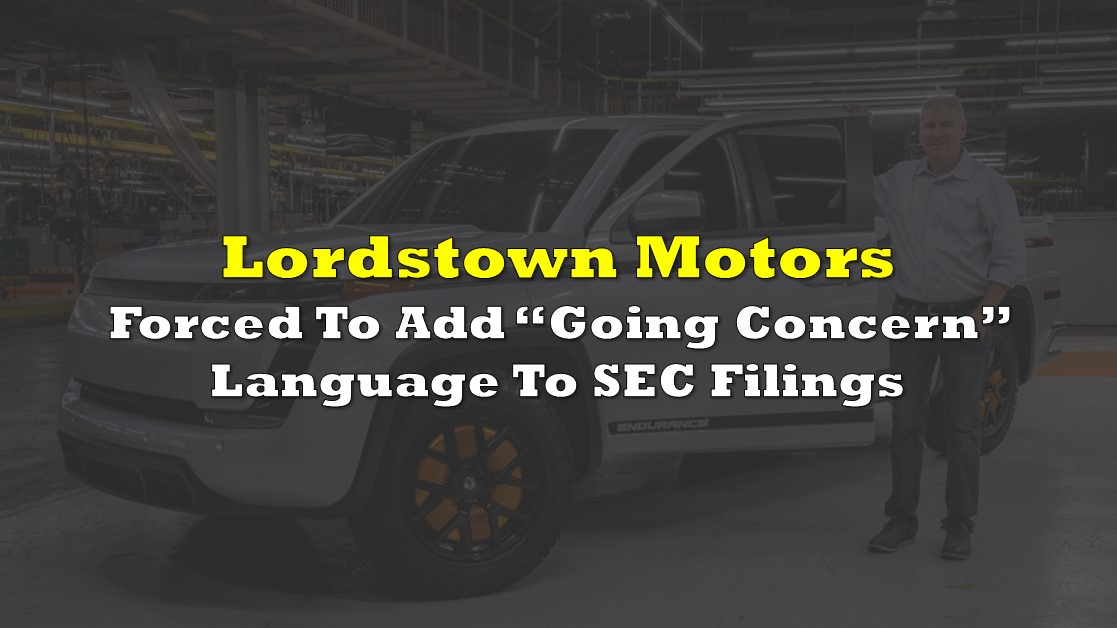 On June 8, Lordstown Motors Corp. (NASDAQ: RIDE) filed its delayed 10-Q for the quarter ended March 31, 2021, as well as an amended 10-K for the full year 2020. The company provided two key disclosures in the documents, both of which are major red flags for the company.

First, its auditors required the dreaded “going concern” language to be included in the filings. Specifically, the text stated, “the Company believes that its current level of cash and cash equivalents are not sufficient to fund commercial scale production and the launch and sale of such vehicles. These conditions raise substantial doubt regarding our ability to continue as a going concern for a period of at least year” from June 8th. A key unanswered question: Lordstown originally filed its 2020 10-K on March 25, 2021, just 2 ½ months ago, and its auditors at that time did not require that disclosure in the document. What precisely has changed since then?

Lordstown still chose not to respond to the allegations put forth by the short seller Hindenburg Research in a scathing research report published March 12. That firm alleged that the 100,000+ pre-orders that Lordstown received for its Endurance electric pickup truck are “largely fictitious.” On its earnings conference call on May 24, Lordstown would only say that a special committee set up by its board continues to review the claims and will respond before June 30, 2021.

Lordstown hopes to secure debt and/or equity funding from a strategic partner to bolster its cash position. In addition, the company is discussing the possibility of an advanced technology vehicle manufacturing loan with the U.S. Department of Energy. Such loans, which are offered at U.S. Treasury interest rates, must be spent on plant retooling or R&D activities.

After providing guidance on a number of key measures for the full year 2021 on March 17, Lordstown announced marked, negative changes to many of those parameters just over two months later on May 24.

In particular, the company boosted its expected 2021 annual operating expenses, including R&D costs, by US$115 million, or a remarkable 50%. Lordstown cited fairly basic factors like completion of its beta testing program, securing necessary parts and third-party engineering service costs as reasons for the increase.

In turn, these higher costs reduced Lordstown’s projected year-end 2021 cash balance to just US$50-75 million, implying an average cash burn rate of US$175 million per quarter over the last three quarters of 2021. The company’s cash balance was US$587 million as of March 31, 2021. Lordstown’s 1Q 2021 operating cash flow deficit plus capital expenditures totaled about US$128 million.

For much of 2020 and into early 2021, investors were keen to buy shares of all companies in the electric vehicle space. If that pervasive optimism were to come back to the markets, shares of Lordstown Motors could potentially reverse course over the short term — despite the operational and financial issues it faces.

Lordstown Motors plans to produce a potentially pathbreaking electric pick-up truck for which there could be a significant market. Nevertheless, the company has encountered production difficulties, as well as growing cost pressures. These pressures have now reached such a level that the company must include “going concern” language in its SEC filings.

Lordstown’s stock could potentially see additional downside based on these fundamentals. However, its high level of short interest could also make it a candidate for a short squeeze, and short-selling investors should be cognizant of this risk. (A number of “meme” stocks have soared this year almost solely because retail investors decided to buy heavily shorted stocks.) About 34 million Lordstown shares, or 19% of all shares outstanding, have been shorted. Lordstown’s short interest comprises an even larger 31% of Lordstown’s float.

Lordstown Motors Corp. last traded at US$10.76 on the NASDAQ.

This article was originally published at https://thedeepdive.ca/lordstown-motors-forced-to-add-going-concern-language-to-sec-filings/