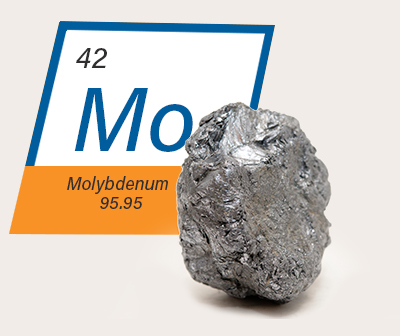 Molybdenum is the latest industrial commodity to go on a tear, with the rare steel-strengthening element more than doubling in value over the past year.

Much of that gain has been put on over the past month, with Platts prices quoted by the LME charging almost vertically on Monday by over $US2/lb to find support at $US16.43/lb.

But what is driving the charge in the little talked about metal and where can it be found on the ASX?

Molybdenum is typically found in quantities of 0.01-0.25 per cent in porphyry or skarn deposits, and is often associated with larger copper and tungsten occurrences.

Molybdenum is a great steel alloy because of its strength and high melting point, which preserves and protects steels from corrosion, embrittlement, and decay.

Around 20 per cent of all new molybdenum goes into stainless steel production, which another 60% finding a purpose in engineering steels, tool and high speed steel, cast iron, and superalloys.

The other 20 per cent goes into chemical compounds and lubricants.

South America overtook China as the leading producer of moly in 2020, according to figures from the International Molybdenum Association, with global production rising 5 per cent from 575.4Mlb to 602.4Mlb.

North America and specifically the United States is the other major producer, increasing its share of global trade from 141.8Mlb to 153.7Mlb in 2020, while production in other nations climbed 34% to 54.8Mlb.

Given China’s hunger for iron ore to feed its hungry steel industry it is little wonder the Middle Kingdom is the world’s biggest consumer of molybdenum.

However, strong steel demand both in China and elsewhere has been attributed for the supply-demand imbalance that has driven prices north in recent months, along with other industrial metals like iron ore and copper.

Molybdenum’s surprise run could not have come at a better time for Newcrest Mining (ASX:NCM), which is developing a $95 million molybdenum circuit at its giant Cadia gold-copper operations in New South Wales.

Cadia will produce around 4.1Mlbs worth of molybdenum every year.

The plant is due to be commissioned this quarter and will enable Newcrest to sell moly separately. Newcrest has previously stated it was poised to generate some $45m in revenue and take $67/oz off its already outrageously low operating costs.

At almost $US16.50/lb and current exchange rates, Newcrest could collect almost double that.

Chump change to Australia’s biggest gold miner, but a strong indicator of growing interest in the rare commodity.

Is there anywhere you can find exposure to molybdenum’s booming prices on the ASX?

Unfortunately from a production standpoint Newcrest is the closest you’re going to get, and given the scale of its global portfolio, you’re probably not there for the by-products.

A decade ago, imploding prices saw former iron ore miner Moly Mines pull its plans to bring the Spinifex Ridge mine near Marble Bar in the Pilbara into production.

Dart Mining (ASX: DTM) has some molybdenum assets on its books in the Morgan and Unicorn porphyry prospects in Victoria.

Caravel Minerals (ASX: CVV) has some exposure to molybdenum as well in its copper assets.

Thor Mining (ASX: THR) owns the Molyhil tungsten-molybdenum deposit near Alice Springs. Although Thor has focused its attention on copper and gold in recent years, higher prices have brought renewed interest to Molyhil.

“Molyhil was a key project for Thor Mining up until a few years ago when the price took a drop, so we’ve been actively working on it but it certainly hasn’t been our key project,” she said.

“We released a new resource in March this year and although the resource wasn’t significantly different from our previously reported resource we were able to take it up to the measured category.”

Warland said the sharp increase in the molybdenum price certainly made Molyhil a more interesting proposition, noting it has major project status from the NT Government.

Molyhil was the subject of a definitive feasibility study in 2018, that gave it a seven-year mine life with an NPV of $101 million, capital cost of $69 million and internal rate of return of 59%.

While the DFS envisioned a molybdenum price of just US$12.50/lb, it was predicated on far higher tungsten prices.

“We are really closely monitoring that and Molyhil itself is ready to go, so we could be in production within 12 months (after an investment decision),” Warland said.

“You’d like to see a little bit more growth in the tungsten price.

“Although it’s moving in the right direction, we’d like to see the price over US$300/t.

“Certainly seeing the price of molybdenum go up over the last few months that’s certainly on our minds.”

At Stockhead, we tell it like it is. While Thor Mining is a Stockhead advertiser, it did not sponsor this article.

The post The molybdenum price has gone sky high in 2021. Yes, molybdenum appeared first on Stockhead.

This article was originally published at https://stockhead.com.au/resources/molybdenum-price-rise-asx/