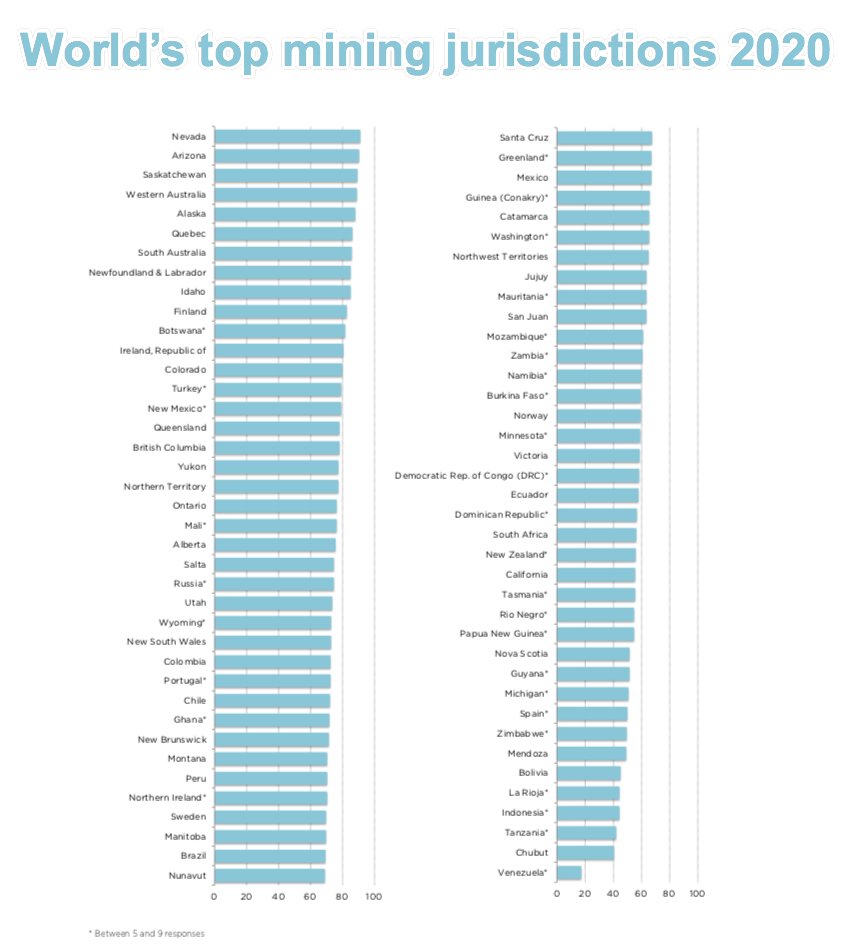 The US state of Nevada is the new most attractive region for mining investors, replacing iron ore-rich Western Australia in the 2020 survey of resource and exploration companies released Tuesday by the Fraser Institute.

The new version of the think-tank’s popular ranking is based on answers from 276 participants, which provided sufficient data to evaluate the overall investment attractiveness of 77 jurisdictions.

The result is a combination of two indexes — Best Practices Mineral Potential, which rates regions based on their geologic attractiveness, and the Policy Perception Index, a composite indicator that measures the effects of government policy on attitudes toward exploration investment.

Second place was taken up by another US state, Arizona, which moved up from the ninth spot in 2019. Canada’s Saskatchewan province climbed eight spots from 11th in 2019 to third in 2020. Western Australia descended from the top spot last year to the fourth, and Alaska dropped from fourth in 2019 to fifth in 2020.

Rounding out the top 10 are Quebec, South Australia, Newfoundland & Labrador, Idaho, and Finland.

When considering how Canadian jurisdictions rank on the Investment Attractiveness Index, the country is the world’s second most attractive region for investment after Australia. This year, Saskatchewan (3rd), Quebec (6th), and Newfoundland & Labrador (8th) made it to the top 10, a significant increase compared to 2019, which didn’t feature any Canadian jurisdiction among the best 10.

Elmira Aliakbari, one of the report’s authors, said Canada’s overall investment attractiveness improvement was largely driven by investors’ better perceptions on mineral potential, a factor that weighs about 60% on the main index.

When it comes to the ten least attractive jurisdictions for investment, the mining executives interviewed chose Indonesia, La Rioja (Argentina), Bolivia, Mendoza (Argentina), Zimbabwe, Spain and Michigan – in that order.

Europe Will Not Benefit From An Inflation Spike