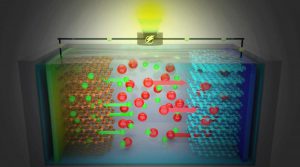 An international team of researchers has developed a graphite||zinc metal aqueous dual ion battery chemistry that promises to tick all boxes when it comes to safety, sustainability, power, lifespan and ethical supply chains.

In a paper published in the journal Advanced Energy Materials, the scientists explain that the new type of cell chemistry for dual-ion batteries or DIBs uses a zinc anode and a natural graphite cathode in an aqueous—or “water-in-bisalt”—electrolyte. This combination of elements is what makes it unique.

“The concentration of salt ions is so incredibly high, it’s almost like water is not there anymore. So, the aqueous electrolyte doesn’t decompose in voltages where it normally would, allowing the use of graphite,” Ismael Rodríguez Pérez, lead author of the study and a materials scientist at the Pacific Northwest National Laboratory, said in a media statement. “That is the most amazing outcome in this.”

Rodríguez Pérez said that the battery showed promising performance during testing and that at approximately 2.3 to 2.5 volts, it achieved one of the highest operating potentials of any aqueous battery.

The researcher also said that, besides improving battery performance, the new chemistry is better for the environment because cathodes made of highly abundant carbon-based materials, like natural graphite, are less costly and extracted in a more sustainable manner than nickel and cobalt.

Rodríguez Pérez and his team explain in their paper that, until now, the use of graphite as a cathode has been limited by the narrow electrochemical stability of water, which caps out at 1.23 volts. The electrochemical stability window is the potential range between which the electrolyte is neither oxidized nor reduced, and an important measuring stick for the efficiency of an electrolyte in contact with an electrode. Graphite would require a much wider stability window. And this is what this new cell chemistry does.

Despite these advantages, DIBs still perform at only about a third of the capacity of Li-ion batteries, which still have one of the highest energy densities of any comparable system. This is why Li-ion batteries are favoured for mobile applications such as smartphones and electric cars.

For Rodríguez Pérez, however, the way to make DIBs compete with their lithium counterparts is by making three times bigger, achieving high voltage and, thus, turning them into suitable candidates for grid energy storage applications.

Three Catalysts For A Reflationary Overshoot Loom Over The Next Month

The Markets May Be Starting To Worry About Rates