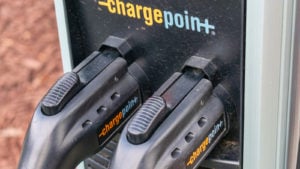 Halfway through the final quarter of the year, ChargePoint Holdings (NASDAQ:CHPT) and CHPT stock are looking like momentum plays heading into 2022.

The electric vehicle (EV) charging network’s stock gained 24% in October, is up more than 7% in November as I write this a little more than halfway through the month, and assuming there are no surprises when it reports Q3 2021 results on Dec. 7, after the markets close, the final month of 2021 could also be a winner for shareholders.

CHPT Stock Is Reaching Its Stride

Since ChargePoint’s stock hit bottom in early October, it’s been almost straight up over the past seven weeks, gaining in five of seven five-day periods.

In late September, I suggested that investors shouldn’t be fooled by ChargePoint’s inability to gain ground in the markets. It was an excellent speculative buy in the low $20s. On Sep. 30, it dropped briefly into the teens before bottoming on Oct. 6, pennies below $18. It’s up 48% from its most recent bottom.

When I discussed ChargePoint in late October, I said the company was doing enough for its stock to head back to $35, where it traded as recently as June. It had just gotten a Buy rating from an analyst with a $29 target price. It’s now less than three bucks from the target.

President Biden signed the $1 trillion infrastructure bill into law on Nov. 15, putting into motion a whole slew of initiatives related to renewable energy and the future of transportation. For example, regarding ChargePoint, $7.5 billion is allocated to building an EV charging network from coast to coast. In addition, part of $5 billion is dedicated to funding the mass adoption of zero-emission vehicles.

InvestorPlace’s Bret Kenwell recently suggested that CHPT has a chance of adding 50% more to its share price soon — possibly reaching as high as $36.86, above my $35 price prediction.

However, it was one sentence from Kenwell that caught my attention.

“For CHPT stock, it would be foolish to sacrifice tomorrow’s growth for today’s bottom line as the EV market feels like it’s finally hitting a major tipping point,” Kenwell wrote on Nov. 16.

As I finished my article in October, “[A]ssuming the world doesn’t do a 180-degree turn and abandon clean energy, the stock will get back to $35 sometime in 2022.”

Not only is CHPT stock hitting its stride, but so too is the EV industry as a whole. It might be crazy to think that Rivian (NASDAQ:RIVN), a company with no revenue, is valued at $124 billion, 50% higher than Ford (NYSE:F), a company that knows a thing or two about building electric vehicles.

However, it’s also indicative of where investors see the world going.

The Electrification of Transportation

Far better to buy RIVN stock, which ultimately might self-destruct, than to miss out on the electrification of transportation. The same theory applies to ChargePoint.

While the odds look to be getting better for the company’s ultimate success and profitability, it remains a stock that is incredibly volatile and not for the faint of heart.

“ChargePoint remains a stock that risk-averse investors should not touch. That’s because, although ChargePoint has a good business, much can change when it comes to charging technology and EVs,” I wrote in October.

As my colleague said, CHPT blows hot or cold. So only diamond hands need to apply.

However, there is no question that the electrification of transportation is here. A decade from now, people will laugh about the investor reluctance toward electric in the early 2020s.

One company that could be leading the charge is ChargePoint. It has a front seat to the drama. While it still has to execute, the reality is, it’s got a massive head start. Except for Tesla (NASDAQ:TSLA), ChargePoint could be the next-best U.S. proxy for the electrification of transportation.

Until someone else proves that it is the 800-pound gorilla, ChargePoint’s so-called excessive valuation is justified in the opinion of some analysts. That is why the 16 analysts covering CHPT stock give it an Overweight rating and an average target price of $32.27.

I continue to like CHPT as a speculative buy. I look for it to close out 2021 in style by crossing into the $30s. We’ll see if I’m right soon enough.

On the date of publication, Will Ashworth did not have (either directly or indirectly) any positions in the securities mentioned in this article. The opinions expressed in this article are those of the writer, subject to the InvestorPlace.com Publishing Guidelines.

Will Ashworth has written about investments full-time since 2008. Publications where he’s appeared include InvestorPlace, The Motley Fool Canada, Investopedia, Kiplinger, and several others in both the U.S. and Canada. He particularly enjoys creating model portfolios that stand the test of time. He lives in Halifax, Nova Scotia.

The post Look for ChargePoint Holdings to Close 2021 in Style appeared first on InvestorPlace.

If you believe in the old adage, “the best place to find a deposit is near an existing one,” you should consider Portofino Resources (TSX-V: POR)… 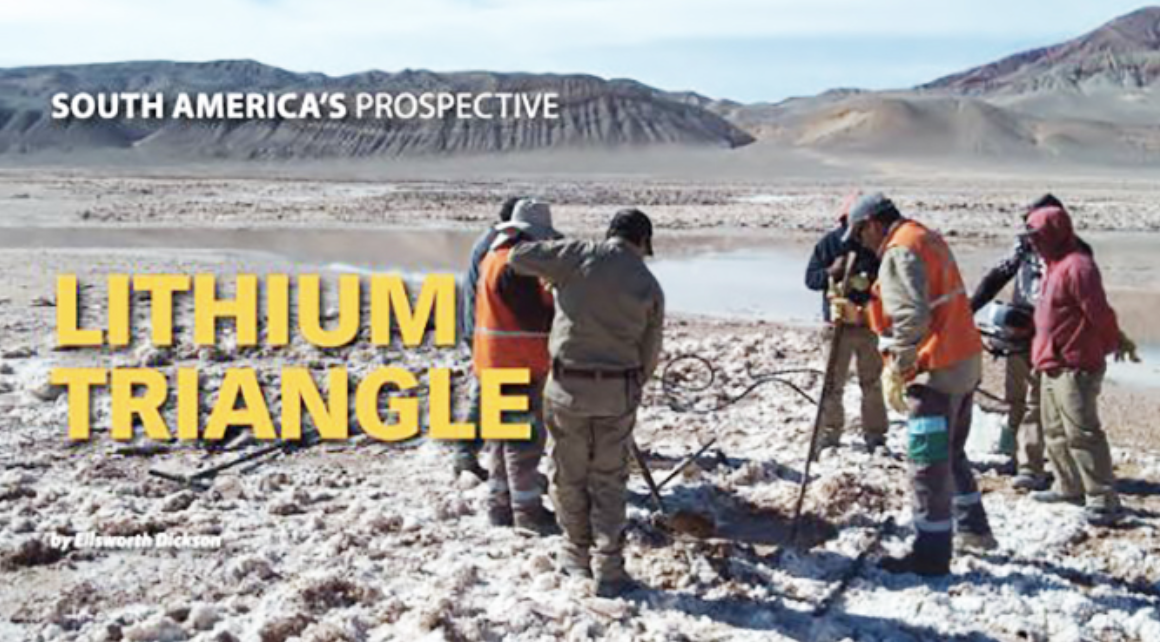 If you believe in the old adage, “the best place to find a deposit is near an existing one,” you should consider Portofino Resources (TSX-V: POR). This Vancouver-based company holds an option to acquire a 100% interest in the Yergo lithium brine project located in Argentina, in the heart of the Lithium Triangle, along with the Allison Lake North lithium and rare elements property. Portofino also owns five gold projects in Canada, and is overseen by an exceptional management team with deep experience in the resources industry.

One of the reasons that all eyes are on the Yergo project is the growing demand for lithium to support the green revolution. As one of the world’s lightest metals, lithium is playing one of the largest roles in our green and clean future. Demand is predicted to increase seven times over the next 10 years, reaching a total global demand of 1.79 million metric tons. Furthermore, for every 1% surge in battery electric vehicle (BEV) market penetration, the world’s need for lithium will rise by an estimated 70,000 tonnes per year.

This has industry experts asking – where will the supply come from?

Sharing a similar geological history with a world class asset

Argentina, Chile, and Bolivia comprise what is known as the Lithium Triangle, and these countries host a whopping 75% of the world’s lithium resources. Portofino’s Yergo project is a salar located approximately 15 kilometres southeast of Neo Lithium’s 3Q project – one of the largest and highest-grade lithium brine deposits in the world. It was initially discovered in late 2015 and took only five years to advance to the construction phase. In October of this year, Neo Lithium announced it had received an all cash, takeover offer of $960 million for all its outstanding equity from Zijin Mining.

Situated in the Lithium Triangle which accounts for >40% of global production in concentrates and >90% of lithium brine resources, Yergo’s close proximity to the 3Q project is significant because the 3Q deposit hosts some of the lowest sulfate and magnesium impurities, classifying it as a world class asset. Furthermore, the 3Q project has measured and indicated resources of lithium grades of >900 mg/L. Portofino’s Yergo project is potentially an extension of the same salar as this neighbouring project with similar grades and low impurities. David Tafel, Portofino’s President and CEO commented:

“Given the proximity of Neo Lithium’s 3Q project, it is likely that the Aparejos salar has experienced a similar geological history, including lithium and potassium enrichment, due to their common evaporitic climate and local geology. The 3Q and Yergo projects are located within the same volcanic package likely with exposure to the same potential lithium source rocks and mineralizing processes.”

Portofino carried out an initial exploration program at the Yergo property in 2019 which included surface and near-surface brine sampling and geological mapping. The sample results reflected values of up to 373 mg/L lithium with low impurities. Following the initial sampling program, Portofino conducted a geophysical survey and geochemical sampling program in 2021. The project is drill ready with an initial drill program expected to commence shortly which will test the volume and content of the brines.

While we’re not implying that Yergo is definitively an extension of 3Q, we believe it’s a high odds possibility, and results from the their drill program will prove out Yergo’s significant potential.

In April 2021, Portofino reported that it was adding to its lithium portfolio with the acquisition of the Allison Lake North lithium and rare elements property, located 100 kilometres east of Red Lake, Ontario. It is accessible by logging roads while a hydro-electric power line runs through the property. Ontario is home to several well-known lithium and rare element deposits, notably the PAK lithium deposit along the “Electric Avenue,” as well as the Spark deposit.

Portofino completed a channel sampling and initial exploration program at the Allison Lake project in June, 2021. Initial grab samples returned values up to 398 ppm Li, 90.5 ppm Cs, 1040 ppm Rb, and 135 ppm Ta. Looking forward, this project will be the focus of an expanded geological exploration program.

This is highly significant when considering that the global quest for electric vehicles and clean energy has caused lithium to emerge to the forefront as one of the most necessary components for lithium-ion batteries. Market penetration for electric vehicles is estimated at ~4% globally and is anticipated to jump to roughly 30% over the next decade. Furthermore, the processing of lithium brine to produce battery-grade lithium carbonate is a relatively simple process which has been tested for over 20 years. With the Zijin Mining proposal to acquire Neo Lithium for its 3Q project, it’s not a stretch to assume that other acquisitions and joint ventures will follow.

Add in a high-grade gold portfolio

In addition to it’s two lithium projects, Portofino also holds the South of Otter and Bruce Lake projects in the Red Lake District, as well as Gold Creek, Sapawe West, and Melema West projects in the Atikokan District of Ontario. Both South of Otter and Bruce Lake projects are proximal to the Dixie Gold project, a high-grade gold deposit currently being explored by Great Bear Resources Ltd. (TSX-V: GBR). In the Atikokan District, the Gold Creek property is located immediately south of the Shebandowan Ni-Cu mine, and the Sapawe West and Melema West properties are located east of Atikokan.