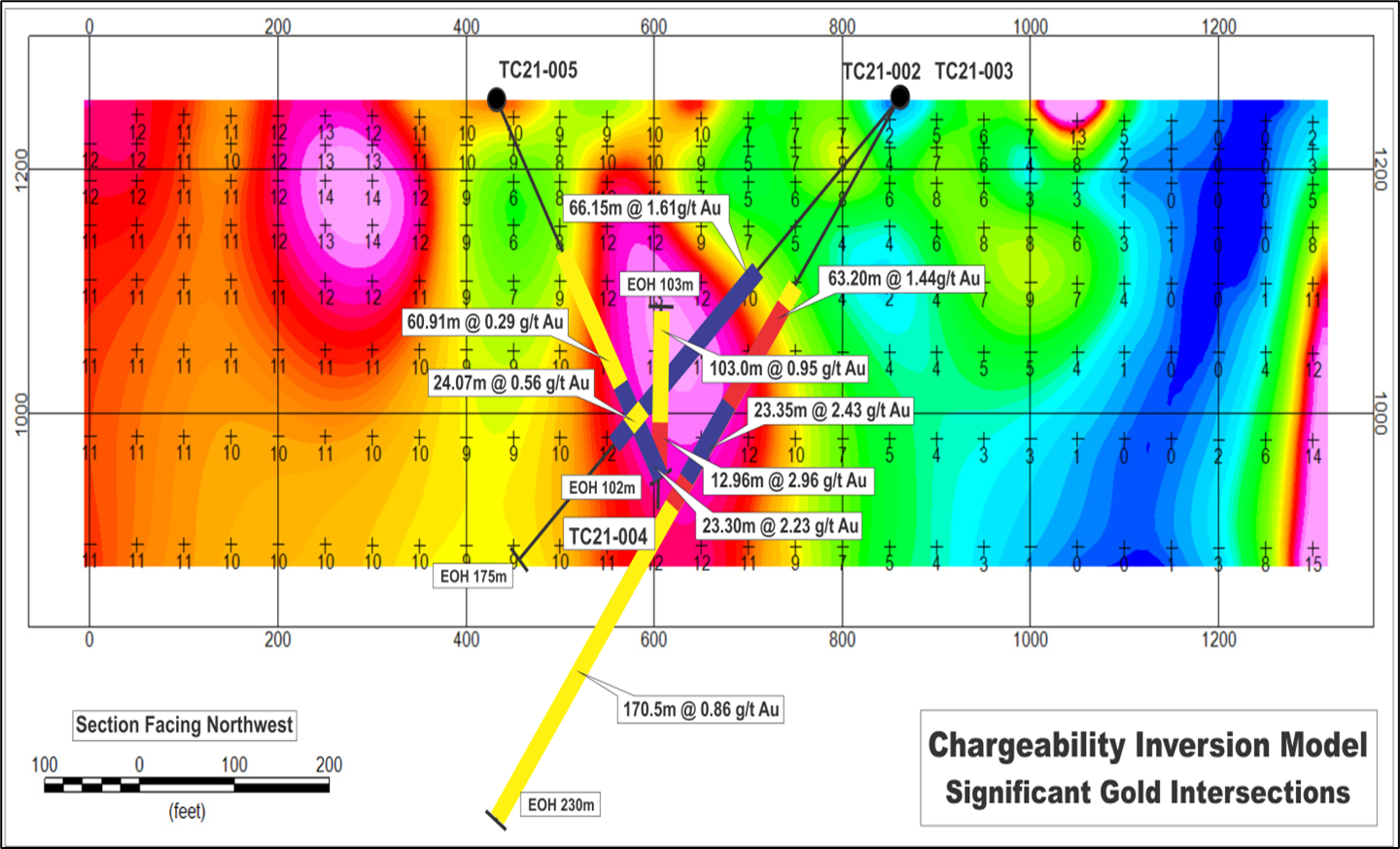 VANCOUVER, BC / ACCESSWIRE / March 7, 2022 / Northern Lights Resources Corp. (“Northern Lights” or the “Company”) (CSE:NLR, OTCQB:NLRCF) is pleased to announce the assay results from the third and fourth drill holes (TC21-04 and TC21-05) completed at the Tin Cup prospect at the Company’s 100% owned Secret Pass Gold Project in Mohave County, Arizona.

Figure 1 shows the drilling results plotted against the historic Induced Polarization (IP) that was carried out by Sante Fe in 1986 and had a maximum depth penetration of only ~200 metres. The drill results show a close correlation with a well-defined chargeability high that dips steeply to the east. The chargeability high is related to fracture-controlled pyrite observed throughout the mineralized zone.

All four drill holes intercepted zones of moderate to strong gold mineralization hosted by altered andesite. Gold occurs as disseminated to fracture-controlled, low temperature mineralization with a moderate to high pyrite/hematite content. The alteration assemblage includes sericite, quartz, chlorite and carbonate. Brecciated and gouge-filled fault zones were encountered in both drill holes and contained disseminated pyrite. Gold mineralization at the Tin Cup is associated with the northwest trending Frisco Mine Fault localized in the andesite and along the margins of the rhyolite dikes.

The gold mineralization at Tin Cup is open at depth and has not yet been tested below an average depth of 95 metres. The focus of this initial drill program is to confirm the gold mineralization that was previously identified by RC drilling in the 1980s and to provide additional geological information on the style of gold mineralization. The drill-hole locations and statistics are found in Table 1 and Figures 3 and 4.

*Hole terminated due to technical problems in the drill holes

The Secret Pass Project, including the Tin Cup Prospect, is fully permitted for drilling and Northern Lights is expediting an aggressive exploration program to delineate further gold mineralization in the Tin cup and FM Zones.

In 2021, the Company completed a soil survey over the majority of the Secret Pass Project claim area including the area between Tin Cup and the FM Zone. This survey identified a significant gold soil anomaly approximately 1,100 metres in length and up to 400 metres wide as shown on Figure 2.

Northern Lights is planning to complete a deep penetrating IP survey over the claim area covering the Tin Cup and FM zones. This survey will explore to depths of ~400 metres and will assist in defining new drill targets associated with zones of high chargeability located along strike and to depth.

Diamond Core (HQ size) was drilled by Godbe Drilling LLC under the supervision of Mr. Lee Beasley, QP for Northern Lights Resources. The core was split with the half core transported to Skyline Assayers and Laboratories (Skyline) in Tucson, AZ. Field control QA/QC samples, including standards, blanks, and field duplicates, were inserted into the sample stream at a rate of one field control sample every 20 regular samples. Samples received by the lab are logged, weighted and assigned into batches. Sample preparation begins with crushing samples to 75% passing -10 mesh. From this sample, 250 grams of material is separated using a riffle splitter which is then further pulverized to at least 95% – 150 mesh resulting in a pulp that is ready for analysis. Gold was determined by fire assay fusion of a 30 gram sub-samples with atomic absorption spectroscopy (method FA-01). Overlimit samples of gold ( greater than 5 g/t) were assayed by gravimetric means (FA-02). Skyline Laboratories is accredited in accordance with ISO/IEC 17025:2017 and ISO 9001:2015.

Information in this report relating to Exploration Results is based on information reviewed by Mr. Lee R. Beasley, a Certified Professional Geologist who is a Member of the American Institute of Professional Geologists, and a consultant to Northern Lights Resources. Mr. Beasley has sufficient experience which is relevant to the style of mineralization and type of deposit under consideration and to the activity which he is undertaking to qualify as a Qualified Person for the purposes of NI43-101 Standards of Disclosure for Mineral Projects. Mr. Beasley consents to the inclusion of the data in the form and context in which it appears.