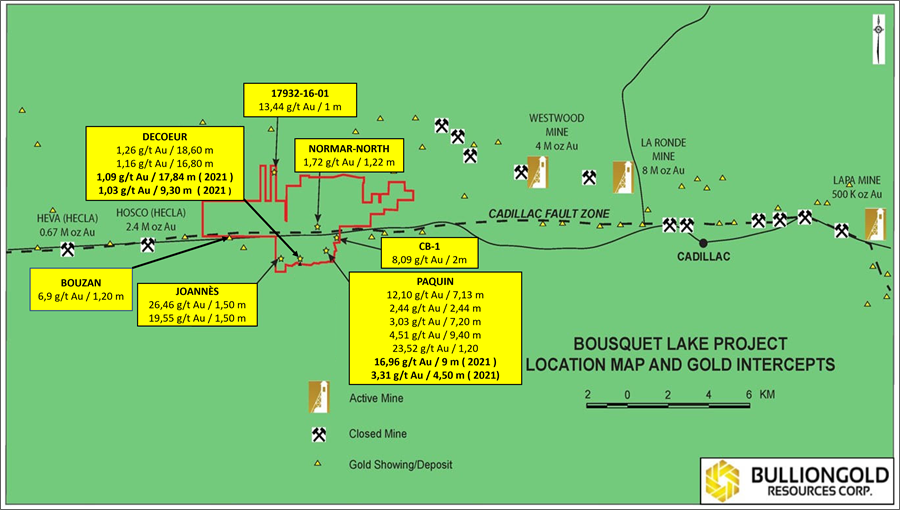 MONTREAL, March 01, 2022 (GLOBE NEWSWIRE) — Bullion Gold Resources Corp. (TSX-V: BGD) (“Bullion Gold” or “the Company”) provides an update on its Bousquet project, which is in the Rouyn-Noranda-Cadillac mining camp, in Abitibi, Quebec.

Composed of 71 claims covering an area of ​​approximately 2,369 hectares, the Bousquet project, located in the heart of the world-renowned Abitibi mining camps of Rouyn-Noranda, Cadillac, and Val d’Or, runs along more than 8 kilometers of the very prolific gold-bearing Cadillac – Larder Lake Fault (CLL). This fault, associated for more than a hundred years with numerous gold deposits as well as hundreds of gold showings, is regularly the subject of work by various junior or major mining companies.

More than 100 million ounces of gold have been produced to date in the immediate vicinity of the fault.

The Bousquet project, well anchored in this gold environment, contains eight gold showings confirmed by drilling. The main CB-1, Paquin East, Paquin West, Decoeur and Joannes showings are located south of the CLL fault, along a sheared, mineralized and silicified auriferous corridor of approximately 3.4 kilometers long varying from a few meters to more than 30 meters wide which, according to historical and current data, contains visible gold on a regular basis.

The Bouzan, Normar and 17932 showings are located north of the CLL fault.

According to the data noted by the Company in the various drilling reports, several historical results would have been influenced downwards, mainly due to poor core recovery, sometimes up to 30%, as well as a lack of analyzes in the potential gold zones.

With more modern equipment and larger drill core in terms of diameter, the Company management believes that core recovery will be much more efficient. As a result, the drill results should be more representative of the true grade and thickness of the intersected gold zones.

The drilling program carried out in 2021 by the Company supports that hypothesis well, having obtained an almost complete recovery of the core during this work with significant gold results in the zones tested.

“The Bousquet property is, in our opinion, one of the properties located on the CLL fault offering the best gold potential in the short and medium term. Little explored in the past, this project contains several significant gold showings that are just waiting to be investigated further. The 2022 program will focus on identifying the potential of the Paquin zone as well as investigating part of the northern sector of the property.” Commented Jonathan Hamel, CEO of the Company.

Most of the holes, varying in depth from 20 meters to approximately 300 vertical meters, drilled since the early 1940s in the Paquin East and West zones have intersected several sheared zones over approximately 1.3 kilometers EW direction containing galena and gold.

The presence of visible gold was noted in more than twenty historical holes excluding BO-21-08 which intersected visible gold giving a grade of 16.96 g/t Au over 9 meters including 129 g /t Au over 1 meter. 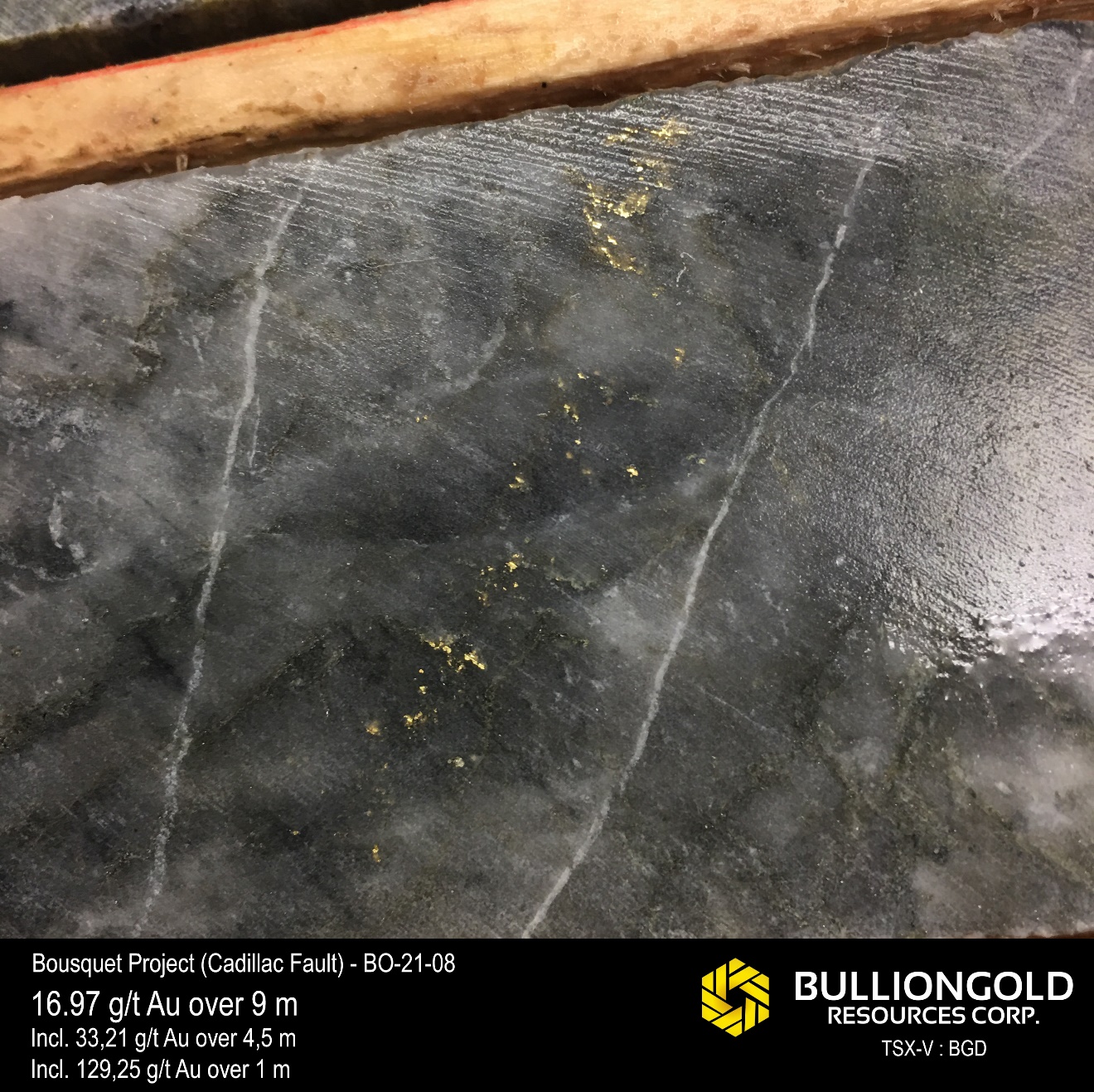 The Decoeur zone, nearly 1 km long, is located SW in continuity with the Paquin zones in a shear system like these two showings. According to the historical data, there is a set of sheared zones containing significant silicification consisting of bluish quartz veins and veinlets mineralized in pyrite and arsenopyrite. Historical drill core recovery has also been very low in this area.

Gold and silver are generally found in these sheared zones varying from a few meters to more than 35 meters in thickness. Fewer than twenty-five holes have been drilled on this showing since its discovery in the 1940s.

Located SW of the Decoeur zone, this gold showing recognized by drilling over nearly 500 meters long was historically tested by about twenty drillings in the 1940s. Again, the recovery of the core was relatively low in several holes. Visible gold has also been detected there in some drilling. These holes have been little analyzed in the past.

The Calder-Bousquet 1 zone (CB-1) is located approximately 700 meters NNE of the Paquin East zone. Very few holes have been drilled on that showing. The presence of gold has been detected there in a few holes in what appears to be a gold system like the other showings located to the SW.

The other gold showings are located north of the fault, but they have not been the subject of intensive work in the past.

In the NE part of the property, following a high-precision magnetic survey carried out in 2021, the Company detected several magnetic anomalies presenting prime targets. Several magnetic lows located in contact with magnetic highs could be caused by the presence of silicified mineralized zones favorable to the deposition of gold. 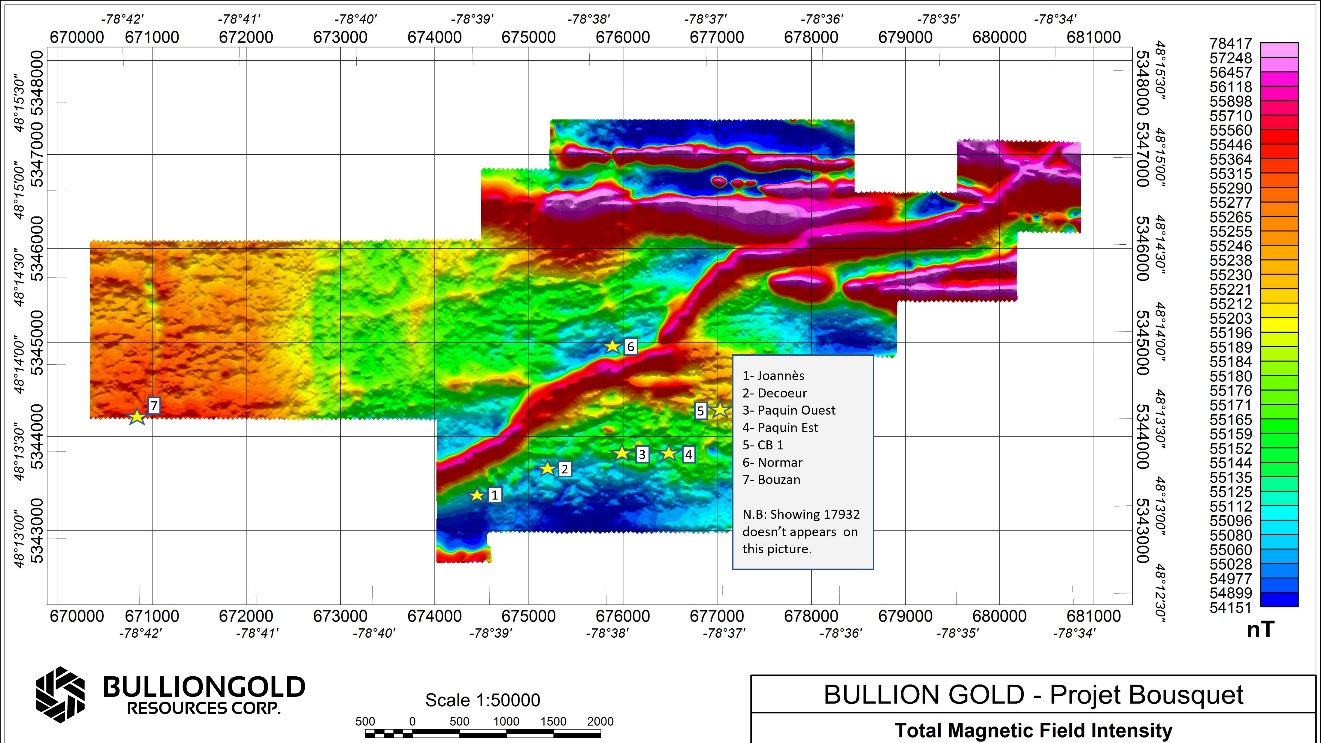 The vast majority of the Bousquet property located north of the CLL fault has hardly ever been the subject of exploration work in the past, which offers the Company a large choice of potential exploration targets for the future.

For the 2022 period, the Company’s management intends to complete a drilling program of approximately 15,000 meters in three specific phases. The Company has obtained part of its drilling permits and is waiting to obtain another group of permits representing a total of forty holes to be drilled in the Paquin East zone and in the NE portion of the property.

The last phase of drilling will test the continuity at depth of that same gold zone at a depth of more than 500 vertical meters. During this same phase, the Company also plans to test various magnetic targets located in the northeast sector of the property.

All the results obtained and compiled with the historical data will eventually be used to establish an initial 43-101 quality estimate of the gold resource in the Paquin East zone.

This press release was read and approved by Gilles Laverdière, P.Geo., director, and Qualified Person under National Instrument 43-101.

Bullion Gold is involved in the identification, exploration, and development of gold mining properties in the province of Quebec.

For more information about the Company, visit www.bulliongold.ca